A Boulder-based maker of the state's most popular marijuana-infused edible is planning to leave the city after the forced annexation of his and several other properties raised regulatory costs by tens of thousands of dollars and created feelings of ill will between city staff and business owners.

Americanna owner Dan Anglin said he intends to move the company out of the city as soon as possible.

"I'd like to find a piece of property that's so far from Boulder they can't come get me," he said.

But first, Anglin and six other business owners will have to undergo a new city application process to continue growing, manufacturing and selling pot products.

Under Colorado law, state licensure is contingent on approval by the local government within whose boundaries they operate.

Prior to the annexation, the properties along 55th Street and Arapahoe Avenue in east Boulder were under county jurisdiction.

Even though Anglin is moving his business, to maximize the value of his existing licenses, they must be approved and paid for through the city of Boulder.

Council voted Nov. 1 to bring that enclave into city limits, a bid to strengthen Boulder's attempt at creating a municipal utility, over the objections of the business owners.

Pot-related enterprises had been operating in the area for several years, but instead of the city of Boulder allowing them to apply for renewal of their marijuana licenses, it is requiring them to apply as new businesses – at a substantially higher cost.

Americanna will pay $41,850 in application fees in 2017, doled out over three installments throughout the year, in addition to an as-yet undetermined per-plant fee.

That is substantially more than the $11,900 the company budgeted for Boulder County license renewal fees in the current calendar year.

Anglin said it's not the cost so much that's pushing him out – "I'll find a way to recover the costs" – but his belief that city staff ignored council's directive to allow the annexed business to pay renewal rates.

"I feel lied to," he said. "City Council says one thing then the city employees do whatever they want to do."

Assistant City Attorney Kathy Haddock said the higher fees were deemed necessary to fund the regulation of the businesses the city now is in charge of overseeing.

"The county doesn't do the same level of inspection" as the city, she said. "The fees are calculated on the time it takes to do all those inspections."

Council member Aarron Brockett said he didn't recall the council's specific directive regarding licensing fees, but said those decisions would normally be made at the staff level.

"Council was very clear (to staff) that they should make this transition as easy as possible" for the businesses, he said.

The process has been anything but, owners say.

"I've been in business for seven years; we're not new to the game," said Loree Schwartz, a lawyer and retired judge who owns Green Tree Medicinals dispensary along with her daughter.

"I own stores and grows in multiple cities and counties, and I've never had to do what I'm doing now," Schwartz said. "I feel I'm applying for a license as if I never existed before."

Green Tree will be paying approximately $35,000 in fees for its six licenses, up from around $5,250 it gave to the county.

And there are likely to be other costs associated with improvements to the space as Schwartz and others work toward a Nov. 1, 2018, deadline of complying with the city's operational requirements.

John Wilhelm has already spent $14,000 on a new surveillance system for his two-person recreational grow operation, money he is taking from his personal bank account.

And Sweet Mary Jane's Karin Lazarus hired a handyman to bolt her refrigerators to the floor of her wholesale bakery, another city requirement.

With only one license, Lazarus is not incurring high licensing costs. But she said she still had to forego giving her employees a Christmas bonus.

"It's much more of an expense than I would have hoped it to be," she said. "None of us were prepared for this."

Lazarus, Wilhelm and Schwartz are all staying put – so far, Anglin is the only business to express an intent to relocate.

"I live here; my kids go to school here," Wilhelm said. "I can't just pick up and move

"I'm just going to suck it up and do what I have to do to comply."

Some concessions have been made. Businesses will have to apply for renewal with the city less frequently than with the county, and can hold fewer licenses for the same operations, according to Haddock.

And all the business owners praised the work of staff in the marijuana enforcement division, as well as the efforts of city council to make concessions to them.

For Anglin, though, the line has already been drawn in the sand.

"I can't attract a buyer, I can't do any long-term planning – that's not how business works," he said. "I feel they don't want me here, so why should I be here?

"At this point, Boulder could do nothing to keep me." 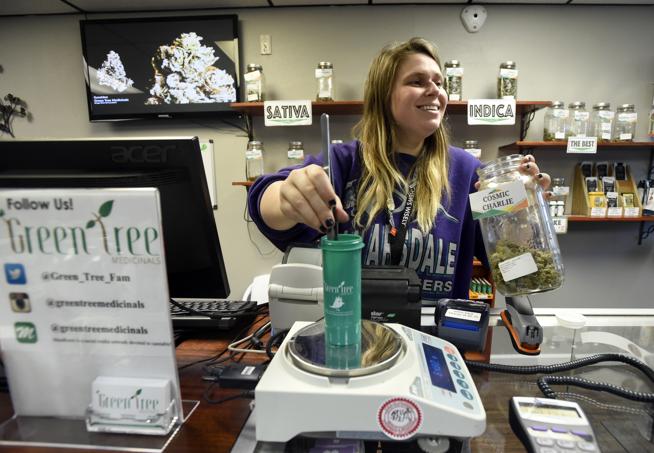 K
CO: Pot Shop Owners Say Changes In Guidelines Could Put Them Out Of Business