Your parents are right: Weed is stronger than it used to be.

A 2015 report from the Colorado Department of Public Health and Environment (CDPHE) titled "Marijuana Equivalency in Portion and Dosage" lists the average potency of flower in Colorado at 17.1 percent and concentrates at 62.1 percent. Compare that to national averages of less than 1 percent in the 1970s, according to findings by the National Institute on Drug Abuse (NIDA), and you can see why older folks say that today's weed ain't what they smoked at the Dead show back in the day.

The increase in potency may be attributed to better growing techniques, now that marijuana is legal in Colorado and there's serious investment in it. But smokers also claim to have a higher tolerance, driving the need for more-potent products.

Before the potency craze, choosing flower was a test of the senses. Patients sought frost and color appealing to the eye, terpenes that pleased the olfactory organs, checked the density of the bud, and were likely influenced by strain names that piqued their interest. Now, THC percentages are integral to the discussion of physical properties and psychological effects.

But Ingrid Henderson, manager at MiNDFUL dispensary and a certified herbalist, says, "THC testing isn't a universal key to how [cannabis] is going to affect your body; it's simply a parameter." There are a lot of variables in the growing process, she notes, and, despite scientists' and regulators' best intentions, in the testing process. That's because every bud has its own unique properties. And everybody has their own response to those properties. "My dispensary is fortunate enough to have most strains above 20 percent," Henderson says, "but I swear to God some of the lower percentages get me higher."

Sound unlikely? We checked in at a lab. An early pioneer for analytical testing, Bugi Perrone is a founder and lead chemist for Gobi Labs, one of the state's first three certified testing laboratories in the industry.

Perrone starts the tour of her lab with the high performance liquid chromatography mass spectrometry (HPLC-MS) machine, an archaic looking instrument of six tiers fit for a typical mad scientist. Perrone explains that a sample is prepared in the solvent and passes through silicon columns at high pressures. Depending on the chemical structure, samples travel at different speeds and each cannabinoid is recognized at a different time. The neighboring computer shows a line traveling across the graph, peaking at different intervals.

Perrone notes, "Curing and testing samples the day we receive them is important. Dry and lighter is better because the analysis is based on the ratio of trichomes [those little hairs on a bud] to the sample's weight."

Echoing Henderson, she says, "There are more factors to marijuana's medicinal/psychological properties than just THC percentages. Also, my liver is different than your liver so all the cannabinoids will naturally affect and heal us differently."

To comply with regulations, first-time strains in a grow facility must be sent four times over a six-month period before rotating in samples once every six months. With a two-day turnaround for test results, growers have to strike a balance between curing the flower to yield the highest cannabinoid percentages and putting it on the shelf at its highest quality. Not to mention, only about a gram is tested to determine the batch's labeling.

And that small sample means that the label might not be wholly accurate. Asked how much the labeled THC percentage on a strain might be off by, Perrone says, "About 10-15 percent."

So it's more than just industry folklore that there's a chance the flower you bought based on THC percentages is misleading. A celebrated 25 percent THC strain may actually contain less than 15 percent THC, while a flower labeled 12 percent THC may actually clock in at 20 percent.

The lesson: Smart cannabis consumers may want to rely as much on their eyes and nose as the hard numbers. 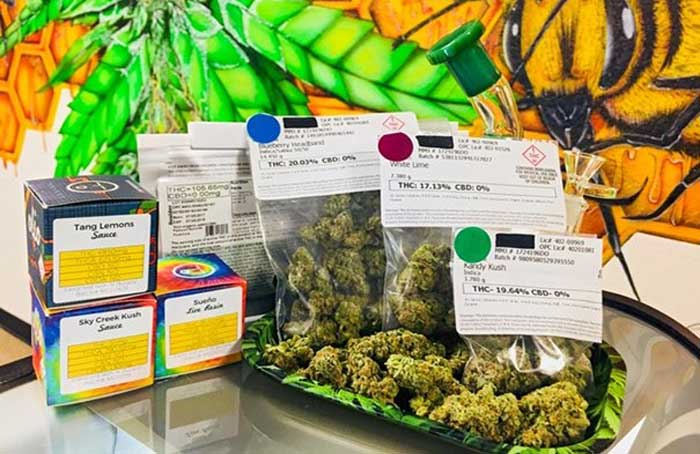