CO: Industrial Hemp Has Potential To Be A New Cash Crop

Agriculture has been a mainstay of Rio Blanco County's economy since the homesteaders settled here. While cattle, sheep and hay have remained fairly consistent, other commodities once raised for profit in the White River valley have long since disappeared. A new interest in industrialized hemp production could change that, if today's growers can find a way to overcome the misconceptions about hemp, conquer the learning curve and tap into an all-new market. There are four industrial hemp producers in Rio Blanco County registered with the state of Colorado.

The Herald Times spoke with two: Richard Brooks and Gerald and Twila Morris.

Neither Brooks or the Morrises describe themselves as farmers by trade. Their interest in industrial hemp springs from the promise of tapping into a lucrative new cash crop. Colorado produces half of the supply for the U.S. domestic hemp market. Industrial hemp must contain less than three-tenths of 1 percent (0.3) of tetrahydrocannabinols, or THC, which is the psychoactive ingredient in recreational marijuana. Instead, industrial hemp crops are processed for cannibidiol (CBD) oil used in food and health products, and for the plant fiber, which can be turned into everything from paper to fabric to plastic to building materials.

CBDs have shown great promise in the treatment of epilepsy and other seizure disorders, pain relief, inflammation, the side effects of chemotherapy and more. While the traditional pharmaceutical industry has been slow to acknowledge the benefits of CBDs in medicine, anecdotal evidence continues to build, from parents of epileptic children to chronic pain sufferers who are able to use CBDs instead of relying on prescription opioids.

This year was the Morrises first attempt at growing commercial hemp for CBDs, and the learning curve, and investment costs, were steep. They spent a portion of the summer learning everything they could learn about the hemp business on a commercial grow operation near Rifle.

"We were going to go commercial on 10 acres," Morris said. But the more they learned, the riskier the investment seemed. "If you've got the cash flow, it might be economically feasible. The potential is there."
Because hemp is still listed as a federally controlled substance, it's a cash-only business. Producers can't get bank loans, or even bank accounts, for their hemp operations. From a market perspective, there is no infrastructure–it's every man for himself–and the market fluctuates wildly.

"Nobody wants to tell the whole truth of it," Gerald said.

"If everything goes right, it could work," said Twila Morris. But that's a big "if," even more so than other agricultural endeavors.

The Morrises worked with cloned plants this year, which is supposed to reduce the likelihood of ending up with a crop of "hot" plants–plants with too much THC–in which case the crop has to be destroyed, even if only one plant tests above the 0.3 range.

While they've sold the expensive lighting system they bought for this year's crop, and are a little more skeptical about the potential for profit, the Morrises believe there's still a window of time for ag producers to get in on the hemp market and make money.

"I think there's a three to five year window before all the states legalize," Gerald said. If that happens, the supply of hemp will increase, and profit potential will decrease. It might also force the development of a commodity market that would guarantee producers a return on their investment.

For Brooks, part of his interest in hemp stems from the profit potential. The other part stems simply from the fact that it's legal to grow hemp in Colorado. This year was his second year to put his hand to the plow, so to speak.

Brooks set aside a 1-acre plot on his rural property. The first year he started a quarter of that from seed. The plants were fast growing, and required little water, but were extremely attractive to crickets, deer and pronghorn. He lost the first crop. This year's crop was the victim of a family emergency that took Brooks out of town. He's not giving up, though, despite the challenges. Confusion over the difference between hemp and marijuana, and the potential consequences, also concerns Brooks. He referred to a Palisade grower, recently arrested and jailed in Mesa County, despite the fact he was legally licensed for both hemp and marijuana production.

"The big difference is use," Brooks said "The planet produces poisons, and it also produces antidotes. Hemp may be one of those antidotes, and the federal government may be keeping it from us."

Brooks appreciates the steps the state of Colorado has taken to regulate hemp production. "I don't mind following the state rules," he said.

Those rules include a $500 fee to register as a producer, fees to cover the cost of crop inspection, and fees per acre of cultivated crop. That's not counting the expense of buying seeds, cloned plants, lights, irrigation systems, processing or scheduling and paying for crop inspections.

Hemp seeds were brought to the Americas in the 1600s for cultivation. British colonies were compelled by law to produce hemp for cloth, sacks, canvas, paper and more. Hemp fiber was essential to the maritime industry, as the rope and fabric created from it were decay resistant. George Washington and Thomas Jefferson were both hemp growers, and encouraged others to do the same. Benjamin Franklin owned one of the first paper mills in America, which processed hemp. The original drafts of the Declaration of Independence were written on hemp paper.

Up until the 1820s and the introduction of the cotton gin, 80 percent of all textiles were made from hemp. Henry Ford's first Model-T was built to run on hemp gasoline and the car itself was constructed with hemp panels. Hemp seed oil was used for paint and varnishes until 1937. Government studies in the early 1900s reported that one acre of hemp equaled 4.1 acres of trees, and predicted that by the 1940s, all paper would come from hemp.

So what happened? It depends on who you ask. Some believe prohibitionists carried their agenda against alcohol into the hemp and cannabis industries. Some insist racism played a role in the earliest days of the "drug wars."

The products produced from hemp are so varied any number of industries may have lobbied for the criminalization of hemp in the 1930s–plastics, paper, oils, livestock feed, textiles, pharmaceuticals and more.

Industrial hemp cultivation was legalized in 2014 in states like Colorado that were willing to regulate the crop. Based on the experiences of those who have jumped into this new market, it would appear legalization is just the tip of the iceberg, but the potential remains. 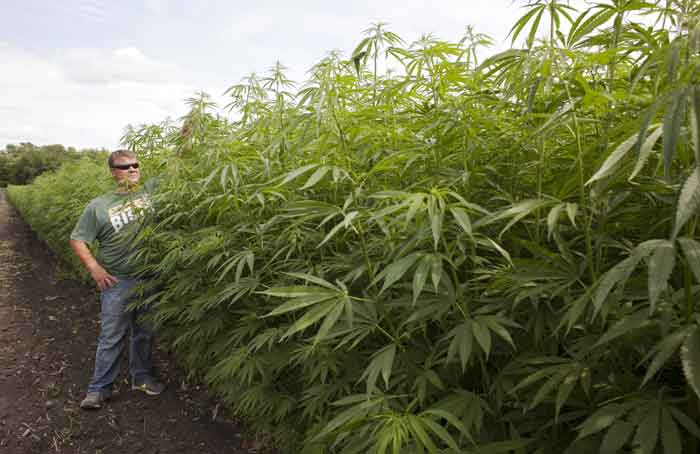