A year ago, City Council decided to do away with cannabis clubs. But instead of straight-up banning the clubs, many of which had been operating for years, local lawmakers created an out: Clubs could apply for a "marijuana consumption club" license that gives them eight years to stay open – if they fundamentally change their business model.

At the time, as CannaBiz reported, most club owners were skeptical of the new, temporary license. After all, it was a concession to the city with an expiration date attached. Ultimately, four clubs got licensed while the rest brought a lawsuit against the city, arguing the ban violates their state and federal constitutional rights, including the right to assemble and the right to partake in cannabis consumption.

That case was dismissed by a district court judge back in November 2016 due to plaintiffs' "failure to prosecute" – meaning the clubs and their attorney didn't properly pursue the case.

The city had already sent cease and desist letters to the unlicensed clubs for violations of the city's business licensing and zoning codes in September, opening a new civil case. In March, the clubs were found in contempt of court in that case, but most are still operating.

Case in point: The Speakeasy Vape Lounge will be closing its doors soon. The club, which is off Platte Avenue near the Lazy Lion's old location, belongs to Jaymen Johnson, perhaps the most vocal of the local club owners.

Johnson was an early supporter of regulation, but didn't like the terms the city's license set out. Nonetheless, he thought it better to get licensed, as a gesture of good faith, reasoning that demonstrating grown-up behavior would persuade the city to lighten up. And in many ways, it backfired.

Now that he must follow the city's rules, Johnson says he's having trouble bringing in enough money to pay the bills. For years, the Vape Lounge operated on a reimbursement model, meaning small amounts of cannabis were offered for on-site consumption to members who pay a fee. But under the license, the Vape Lounge can no longer supply any cannabis.

Operating now with a "bring your own" policy, Johnson doesn't feel comfortable charging a membership fee, so has to rely on snacks and bottled water sales. At $1 a pop, they're just not covering rent, utilities, employees' wages and all the other costs associated with running a club – let alone allowing him to turn a profit.

"We're no longer able to provide the base service that clubs are supposed to provide," Johnson says, adding that people who come to hang out and smoke at the Vape Lounge often get their cannabis from other clubs.

It's a dynamic unique to the Springs' cannabis club scene. Every liquor-licensed bar, Johnson points out, is permitted to do the same thing: sell alcohol. Drinkers choose a watering hole based on vibes and, maybe, what's on tap.

"But [cannabis clubs] don't have that uniformity in structure," he says, "[Getting cannabis at an unlicensed club to smoke at the Vape Lounge] is like if you were to go to the dive bar down the street, get a beer, then go to the Broadmoor to drink it."

Johnson had hoped all the clubs would apply for the city's license and, thus, all take up a BYO policy. Now, he's frustrated that those that didn't are getting away with it.

"What we have would be feasible if every other club operated this way, if it were industry standard," he says. "But the other clubs said, 'We want to get away with as much as possible,' and that doesn't progress the movement."

"We've been saying since the beginning that the license the city proposed is doomed to fail, since we can't make a profit under that business model," says Joe Trevino, former manager of the unlicensed My Club 420. "That's why we didn't go along with it and why we're trying to fight it."

My Club 420 recently closed its Rockrimmon location to join forces with the Dab Lounge, which is located at 1532 N. Circle Drive.

"We're up-and-running, business-as-usual until something changes" says Ben Verbeck, general manager at the Dab Lounge. Adding,"We don't really operate in fear because that [would] just kind of ruin the vibe we're trying to create here."

After being found in contempt of court in March, the unlicensed clubs were served citations ordering them to appear for a "show cause" hearing that's since been postponed twice. Their court date is now scheduled for September.

Meanwhile, the other licensed clubs are still open but under stress.

Studio A64, the city's first cannabis club, which has always striven for legitimacy and professionalism, is also struggling to get patrons through the doors now that there's no cannabis available inside. The fact that most clubs spurned the new rules has created an uneven playing field, but unlike Johnson, Ambur Racek, co-owner of Studio A64, has no beef with the unlicensed clubs.

"It's not going to get anyone anywhere," she says of the inter-club drama. "I really wish we could go back to the way things used to be."

The Family Joint, also licensed, is plagued by a whole different set of problems. Co-founders and owners, Travis Perkins and Stephanie Durr, who didn't return multiple requests for comment, will go on trial in January. They've been accused of fraud and theft.

The Pot Hole, the last of four licensed clubs in town, says they're doing OK under the BYO model. 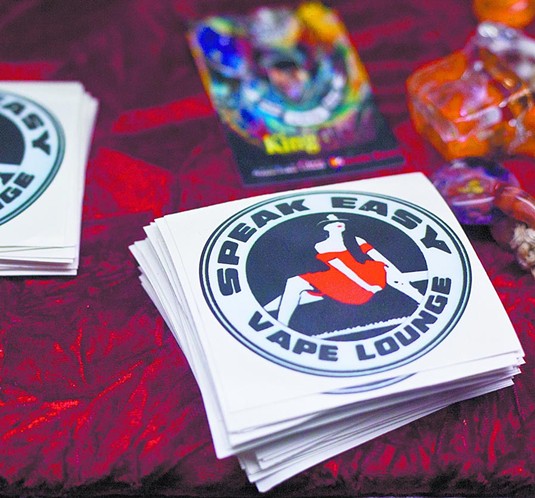