CO: Weed Sales Get A Boost In Northglenn With Extended Hours For Pot Shops

Cannabis consumers in the metro area are getting more and more hours to buy their weed, with Northglenn on Monday becoming the latest city to extend the closing time for pot shops.

The City Council voted 7-1 to allow Northglenn marijuana retailers to stay open as late as 10 p.m. – two hours past the current closing time of 8 p.m. – and to open an hour earlier, at 8 a.m.

Northglenn's decision was driven largely by competitive concerns that nearby jurisdictions are siphoning away late-night customers. Next-door neighbor Thornton, which legalized marijuana stores only last year, stipulates a closing time of 9 p.m. Commerce City allows stores to stay open until 10 p.m., while residents in Federal Heights lifted that city's ban on recreational pot sales in November.

"We want to remain competitive and allow our store owners to make a profit," said Jordan Sauers, a councilwoman in Northglenn.

City Manager James Hayes said the idea for extended hours was brought to the city's attention by marijuana business owners this year.

"The argument is other nearby municipalities with marijuana retailers are open until 10 p.m.," he said. "They believe that closing at 8 p.m. puts them at a competitive disadvantage, that it's difficult for their customers to get to the store before 8 p.m. and are therefore going to surrounding communities to make their purchases."

The issue of late-night pot purchases picked up steam this spring after Denver leaders added hours for the city's 215 marijuana stores, extending closing time from 7 p.m. to 10 p.m. Boulder made the very same move at the end of 2016. Concerns had been raised during discussions leading up to Denver's decision that the city was losing nightly cannabis business to nearby communities, including Glendale to the east and Edgewater to the west, where pot shop doors close at midnight.

Competitive pressure also was coming from Aurora, which has more than 20 recreational pot shops. The city permits its cannabis businesses to remain open until 10 p.m.

For Northglenn, which has five shops and for a couple of years was the only city in Denver's northern suburbs to allow pot sales, the shorter hours are apparent to those working the business. Salim Sacre, general manager for The Green Solution in Northglenn, told the council Monday that his employees end up "scrambling" to finish up transactions with customers before the 8 p.m. bell rings.

"People want our store to be open later and earlier so they can shop there," Sacre said.

Brad Speidell, chief dispensing officer for The Green Solution, said the chain's store in Aurora has seen "quite a bit of additional revenue" as a result of later hours of operation.

Store owners in Denver who chose to extend their hours to 10 p.m. have seen revenues climb 20 to 30 percent on average, said Kristi Kelly, executive director of the Marijuana Industry Group. She also said later hours enhance safety by starving the black market of late-night deals.

"Every legal sale that occurs is another one taken away from the illegal market," Kelly said.

And every sale that doesn't happen inside a Northglenn pot shop translates to zero tax revenue for the city. Kris Teegardin, mayor of Edgewater, addressed the council Monday and said tax revenues from his square-mile city's half dozen pot shops "have been good for us." Teegardin said Edgewater is using its pot tax revenues to pave its streets and build a brand new civic center.

A couple of people who spoke to the council advised against extending closing time, citing late-night safety concerns and people possibly mixing alcohol with pot as they close out a night of drinking at the bar. But Northglenn Mayor Joyce Downing said she had heard few complaints from her constituents on the matter.

"I don't think the community is concerned – that's what I'm hearing," she said. 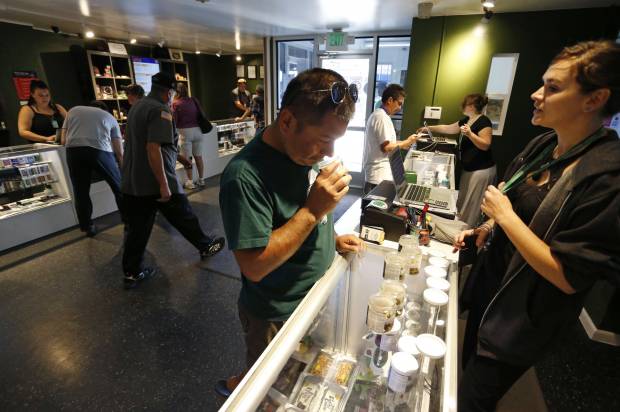 Oct 7, 2014
The General
T
T
Pot Shops In Denver's Suburbs Fewer And Farther Between Than In City