To some purveyors of that green, leafy and legal-in-Colorado substance – as well as its edible, drinkable and fellow byproducts – the term "pot shop" makes them cringe. You also can add "weed," "marijuana," "dope" and other monikers to a list of terms that makes them as uncomfortable as those opposed to the legalization of – let's get it right, now – cannabis.

"In a certain aspect, it's about being politically correct," said Jesse Miller, one of the owners of the Leaf Aspen recreational dispensary. "Calling our products 'dope' (as a noun) is politically incorrect."

As legalized recreational marijuana sales continue, many in the industry are trying to distance themselves from the stoner-esque vocabulary that they claim fuels an unfair stereotype.

The quest to reverse the slacker image associated with users begins when customers visit the store, said Brian Radtke, who works for Green Dragon, which has medical and recreational operations in Aspen's Hyman Avenue pedestrian mall.

"I think it starts with our employees, and people come in and see that we're not your typical stoner and part of the cannabis culture," Radtke said. "The culture is a sophisticated group of people; we have doctors, attorneys and upper-echelon clientele, and I don't think they think of themselves as stoners. By using the term 'cannabis,' we're trying to associate ourselves as upper-echelon."

Even the word "marijuana," according to Miller, sends the wrong message. Miller argues it's a pejorative term – its roots are Mexican Spanish – that became commonplace in the 1930s when the drug became regulated in every state. Leading the way were newspaper baron William Randolph Hearst and the Du Pont family, which fought to outlaw industrial hemp so they could replace it with nylon.

Leaf's Cally Shadowshot also gets a bit fired up about the word, so much so that she argues Colorado should change the name of its enforcement agency to better reflect the industry it monitors.

When Miller and his partners acquired Leaf, one of the first things they did was remove the pot-leaf image from their company logo.

Both Radtke and Miller said their stores don't mandate that their employees use certain words and avoid using others, but they ask their workers to use common sense with whom their dealing.

"'Pot,' 'weed,' 'stoner.' Using those words in the general public is OK," Radtke said. "But in the store, we try to refrain from those words. We want people to understand that we're a professional business. It all comes back to educating, and educating and educating."

Aspen's fifth recreational dispensary to open was Native Roots. Native Roots is a Colorado chain, with stores scattered throughout the state.

Its chief executive officer, Josh Ginsberg, said he doesn't get caught up in the lingo.

"My personal opinion is for people to call it whatever they want to," Ginsberg said. "It's a new industry, and if they want to call my place a pot shop, they can. Or they can call it a cannabis dispensary. That's my mindset. I never want to put people in a box."

But, Ginsberg said, his medical dispensaries adhere to a stricter vocabulary.

"We speak to everything as medicine," he said. "But in the rec shops, we tell our employees to make the customer feel comfortable."

For Miller, the industry's shifting vocabulary is steering public perception. Once, he said, a man entered his store, called him a "s– head" and lambasted him for being in the business. Miller said he saw no point in arguing with the man and let him have his say. Miller's job, he said, is to shed old stereotypes and rebrand the industry.

"If we approach this like 'Cheech and Chong,' everybody's going to be worried about us," Miller said. 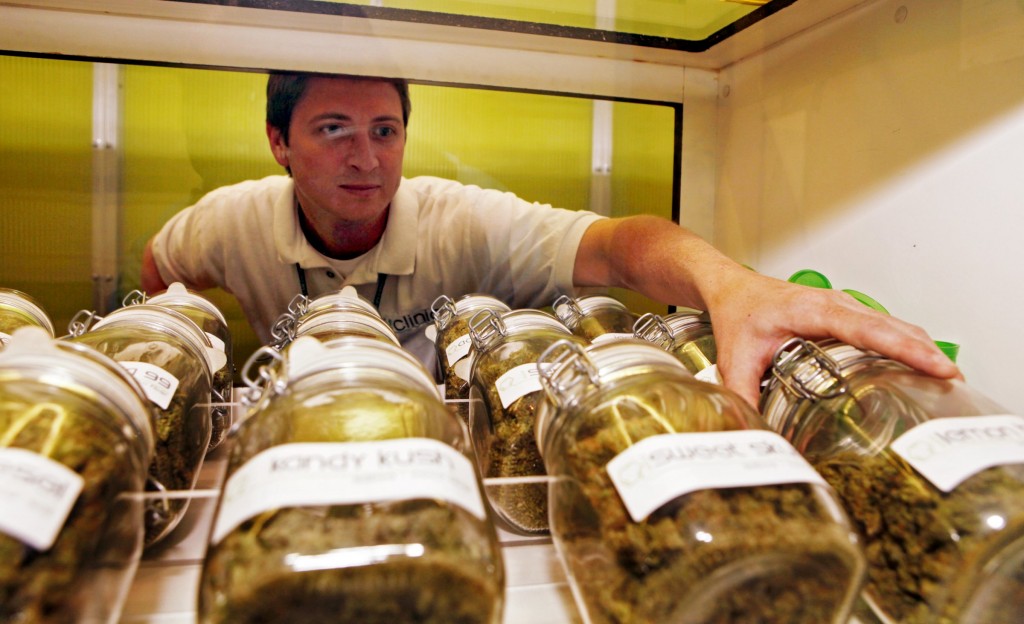 K
IL: Man Turned Away From Metro East Bank For Medical Marijuana Use

K
R.I. Leaders Say They Have Votes To Legalize Marijuana