Marijuana farmers and agricultural tax breaks are the next wrinkle facing the states that have legal weed as lawmakers debate how to tax the product while it's growing. Legislatures in both Colorado and Washington are taking a look at pot farmers this session. The states have already decided how to tax finished marijuana. But they are still mulling taxes as pot is produced, such as how the land on which marijuana is grown should be assessed for property taxes.

Some lawmakers in both states say marijuana growers shouldn't be eligible for any taxation perks afforded to farmers that grow conventional crops. Others say that marijuana while it's growing should be treated like the hops and barley that go on to become highly taxed alcohol. Colorado lawmakers delayed a vote last week on whether marijuana greenhouses should be considered agricultural or commercial property. The bill, meant to codify the already-common practice of assessing conventional nurseries and greenhouses, ran into confusion when its sponsor added a last-minute amendment to ban pot growers from getting the advantage.

Republican Sen. Kevin Grantham said he wanted pot growers to "not see any benefit from the ag designation." Grantham opposed marijuana legalization in 2012, but said his latest effort to block marijuana tax breaks isn't a knock on the growers. Instead, he says, he simply wanted to keep the focus of his bill on traditional crops and avoid a marijuana debate. "It's not the fight we're fighting right now," Grantham said before his bill was first heard. Later the same day, while explaining his bill to colleagues, Grantham joked that his effort backfired, and that the pot language was "quickly growing to be the fun part of this bill now, apparently."

Washington lawmakers, meanwhile, are considering a bill to prohibit marijuana growers from qualifying for agriculture tax breaks for 10 years–giving the state time to collect information and make a decision. The states flouting federal drug law and establishing commercial pot industries have settled how to tax marijuana once it's dried and ready to smoke. But how to tax growing marijuana and the land it's grown on is still under debate.

"We're too early in the process to make a determination how to do this right," said Meg Sanders, owner of Gaia Plant-Based Medicine in Denver. Sanders owns a three-store chain of medical marijuana dispensaries and a 35,000-square-foot warehouse in Denver where her marijuana is grown. Denver considers marijuana growing sites commercial property, while a warehouse growing commercial tomatoes or lettuce is considered "other agriculture." The difference for tax purposes is significant, though rates vary by county. "I believe that retail marijuana should be treated as any other agricultural crop in a state where it is legal. It is a plant, just like any other plant grown for consumption," Sanders said.

Colorado voters last year overwhelmingly approved steep taxes on finished marijuana, which is taxed at least 25 percent, in addition to local taxes. But Colorado law is still murky on how growing marijuana should be taxed. Grantham believes marijuana producers should enjoy none of the property tax perks afforded to conventional farmers. Others point out that alcohol is highly taxed, but the hops and barley raised to make it qualify for agriculture tax rates. "Why should this be any different?" asked Sen. Jessie Ulibarri, D-Westminster. Ulibarri's district includes many marijuana warehouses located along Interstate 70 just north of Denver.

Grantham's bill awaits a vote in the Senate Finance Committee. The agriculture assessment change wouldn't cost the state any money, and almost all local assessors already use the agricultural property tax category for conventional greenhouses and nurseries. Any differing tax collections would be felt at the county level, with no estimates available. Current Colorado law says that medical marijuana growers are eligible for no agricultural tax breaks, but the law is silent on how recreational pot land should be taxed.

In Washington, lawmakers have yet to vote on a bill prohibiting marijuana growers from qualifying for agriculture tax breaks. Washington officials estimate that the industry could currently qualify for three dozen different tax breaks, largely surrounding agricultural production. But a state House committee is exploring a bill that would block those tax breaks for 10 years. Democratic Rep. Reuven Carlyle, a sponsor of the bill, said he doesn't think the tax preferences were designed to help the marijuana industry, which is currently under development.

"I don't know that we have a problem in the marketplace that these exemptions would be designed to fix," said Carlyle, who represents portions of Seattle. Washington officials estimate that the new rules would increase state and local tax revenues by a combined $3.5 million over the span of one year. Washington lawmakers have not scheduled any votes on the bill. Both states voted in 2012 to legalize and regulate the recreational use of pot by adults over 21, with retail marijuana shops allowed. Sales began Jan. 1 in Colorado and are due to begin in Washington in the coming months. Marijuana in Washington will be taxed 25 percent at three possible transfer points from production to retail sale, plus sales taxes. Colorado voters approved a 25 percent sales and excise tax on finished marijuana, plus local taxes. 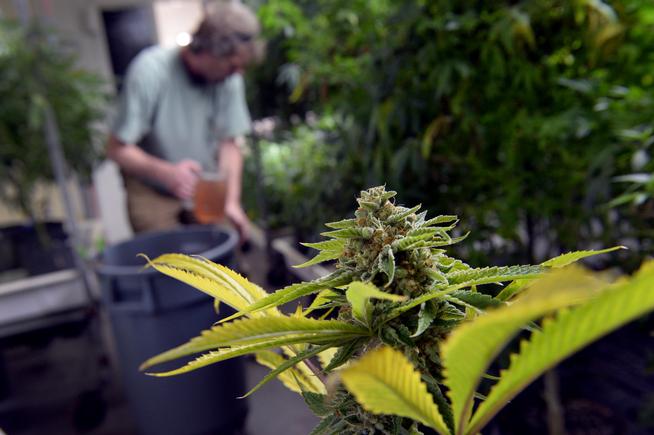 Tax MJ back to the underground...

I'm only in it for the Oil
D


Where I live is 90% Ag property the other 10% is Federal and state property. I think it will be really difficult for the state of Confusion aka Colorado to tax portions of Ag property owned by the same individual different for weed production vs. corn, onions or hay for cow feed. Seems like the land is still used for producing something for human consumption regardless of how it is consumed. So tax the end product like everything else and leave Ag property as it is.
D

If it's legal and the people of Colorado voted for it to be legal then why are legislators like Grantham being so vindictive about growing it? It's nonsensical.

T
Washington Voters To Weigh In On State Pot Taxes

Oct 11, 2014
The General
T
T
Marijuana Taxes On The Ballot This November