The first recreational pot market in the U.S. was set Thursday to notch another marijuana first when Colorado approves using marijuana taxes to fund police efforts to crack down on illegal growing operations.

A measure scheduled to be signed into law by Gov. John Hickenlooper sets aside nearly $6 million a year in Colorado marijuana tax revenue to reimburse police for investigating black-market marijuana activity that authorities say has increased since the state legalized recreational marijuana in 2012.

The fund was backed by police groups who complain that marijuana legalization has attracted illicit marijuana growers along with legal ones.

The bill was also backed by Colorado's nascent marijuana industry amid complaints that illegal growing operations undercut prices of pot grown legally and give legalization a bad name.

Oregon sets aside 20 percent of its pot taxes for "local law enforcement" in cities and counties, plus another 15 percent for state police. But Oregon does not direct police to use that money to investigate black-market pot operations.

Colorado's fund is the first in any state designated to specifically combat the black market. Colorado gave law enforcement about $1.7 million last year for other marijuana-related enforcement activities, such as training officers to spot stoned drivers.

The black-market grants are aimed at rural communities, where there may be no pot dispensaries and no local tax benefit from legalization.

Rural communities have also attracted some high-profile illicit drug operators accused of trying to exploit Colorado's pot law to produce marijuana for sale out of state. The small towns where this has happened have limited police resources and their officials have said they cannot thorough investigate some sprawling marijuana growing operations.

"An investigation like this can be very time-consuming and expensive," said Michael Phibbs, head of the Colorado Association of Chiefs of Police.

The U.S. government allowed Colorado's marijuana legalization experiment on the condition that state officials act to prevent marijuana from migrating to other states where it is still outlawed and ensure that criminal cartels are kept out of the growing business.

The pot industry acknowledges the criminal activity and insists it is doing all it can to prohibit legally grown weed from crossing state lines. Among other safeguards, Colorado law requires growers to get licenses and use a "seed-to-sale" tracking system that monitors marijuana plants from when they are grown to when the finished product is sold in retail outlets.

A dozen raids across southeast Colorado in 2016 led federal authorities to seize more than 22,000 pounds (10,000 kilograms) of marijuana they said were intended for out-of-state sale.

There have been debates in some states over racial disparities in drug arrests after legalization. But the Colorado bill's sponsor said the extra funding for police is not meant to jail more people. Instead, it is aimed at helping rural areas ill equipped to investigate possible multinational drug operations, she said.

In Colorado, "to my knowledge there is no evidence that illegal growing disproportionately affects minority communities," said Sen. Irene Aguilar, a Denver Democrat who sponsored the bill.

Hickenlooper was also scheduled to sign a bill Thursday that limits the amount of marijuana that can be grown in most homes to 12 marijuana plants no matter how many people might be living there. Current state law allows adults over 21 to possess six plants each and more if doctors recommend a higher plant count.

The 12-plant residential limit is already required by local zoning laws in most of Colorado's larger communities, including Denver. That makes it unclear how many people would be affected by the statewide limit. The statewide limit takes effect in 2018. 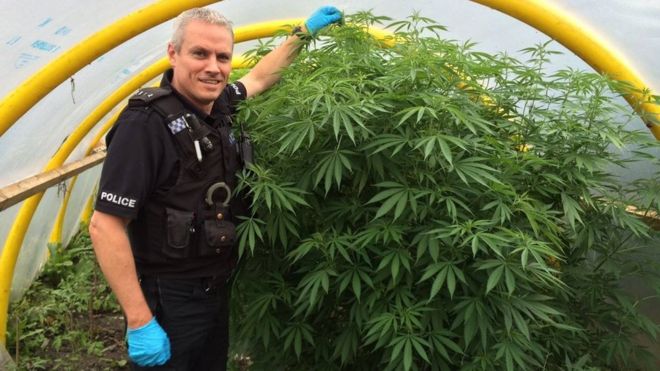