Dozens of families who moved to Colorado to treat their severely disabled children with a special kind of marijuana could lose access to the treatment under new rules proposed by the state health department. The proposed rules would stop medical marijuana caregivers from serving more than 10 patients at a time. Current rules allow for caregivers to serve more if they obtain a waiver. Only four of Colorado's 2,896 caregivers currently serve more than 10 patients, according to state figures. The caregiver who said he serves the most patients, a Boulder County man named Jason Cranford, has nearly 90.

Most of Cranford's patients, though, are children with severe seizure disorders, he said. Cranford provides them with a non-psychoactive marijuana oil extract that is rich in a compound called CBD. He makes the extract from a plant he named Haleigh's Hope, after one of his patients whose mom credits the treatment with saving her daughter's life. If the rules pass, Cranford said he'd be forced to jettison dozens of patients. "I pray that she'd be in that 10," said Haleigh's mother, Janea Cox. "But I just don't know. How can you choose between kids? These are kids' lives."

The Board of Health will hold a public hearing on the proposed rules Sept. 16, and Cox said she expects numerous families to protest the rules at that meeting. The state health department says the new rules are needed to curb abuses in the caregiver system, which law enforcement officials often cite as a source of illegal diversion into the black market. A critical state audit previously found oversight of caregivers lacking and said some caregivers may be "actually small-scale businesses but are not being regulated as such."

Dr. Larry Wolk, the executive director of the Colorado Department of Public Health and Environment, said the large marijuana grows associated with plus-sized caregivers could pose health and safety risks, especially if they are in residential areas. "We want to try to create a reasonable ceiling for what can be considered a caregiver operation," Wolk said. "Because, at some point, it does need to be called a commercial operation." The issue reaches deep into the details of Colorado's tangled medical marijuana rules.

A caregiver is defined in Colorado's medical marijuana constitutional amendment as someone who "has significant responsibility for managing the well-being of a patient." A caregiver is allowed to grow marijuana on behalf of that patient, but a subsequent appeals court decision clarified that caregivers must do more than just provide marijuana. When lawmakers legalized medical marijuana dispensaries – which must abide by much stricter regulations than caregivers and pay hefty licensing fees – they also limited caregivers to serving five patients apiece, with a waiver allowing them to serve more. The proposed new rules keep the waiver in place but put a hard cap of 10 patients on any single caregiver.

Twenty caregivers – 0.7 percent of the total – currently serve more than five patients. More than 75 percent of caregivers serve only one patient, according to state figures. Caregivers serve about 3.8 percent of the state's total medical marijuana patient population. Cranford's patient numbers have shot up as the result of increasing interest in using CBD oil to treat kids with serious forms of epilepsy that aren't controlled by traditional drugs.

While some CBD providers – most notably the Realm of Caring, which was featured in two CNN specials on the subject – sell the oil through a dispensary, Cranford chose to provide the oil as a caregiver. He said doing so means he can keep costs low for his patients. "In my situation, it's obviously for the patients," Cranford said. "What I'm growing can't even get you high. I'm getting caught in the crossfire." Wolk said patients who lose their caregiver as a result of the proposed rules could switch to other providers.

"They may be able to obtain these products from another caregiver or a dispensary," he said. "These are not products that are unique to a single caregiver." But Cox, who helps with Cranford's Flowering Hope Foundation to provide CBD oil and support to families, said there aren't enough CBD providers in Colorado to meet the demand. The Realm of Caring, for instance, has a wait list of thousands of families.

Cox estimated that about 60 percent of families connected to the Flowering Hope Foundation moved to Colorado for CBD because they felt the treatment options in their home state had run out. Cox moved from Georgia in March, and she said Haleigh has gone from hundreds of seizures a day to about four or five while on CBD oil. "I just don't know what I'd do without Jason," Cox said. "It just gives you this horrible feeling in your stomach that you're fixing to be abandoned by another state." 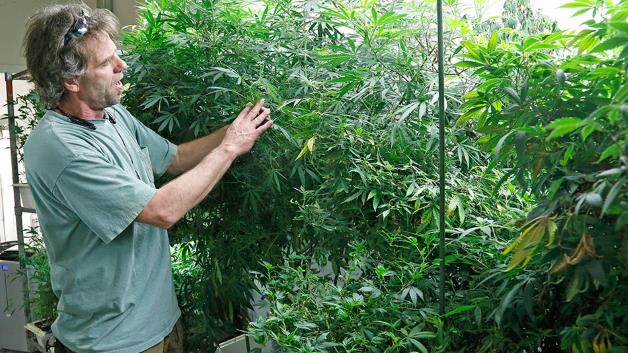 Jason Cranford gets a chance to apply for a waiver to be an oversized caregiver.
If he fails the patients go through regular dispensary channels.

This sounds to me like a crisis affecting only one guy, who is or is not already bending his way around the caregiver laws.
Radogast