Eisa Khoury, part owner of three medical marijuana dispensaries in Colorado, waited patiently Thursday for confirmation that the state had accepted his applications for nonmedical retail sales of pot.

Khoury is among a handful of pioneers poised to launch the marijuana revolution Jan. 1, when retail stores will open in the state.

If all goes as planned, on New Year's Day anyone 21 or older can walk into a store and walk out with their choice of up to an ounce of Bubba Kush, White Rhino or other preferred strains of cannabis. Non-Colorado residents will have to settle for a quarter ounce under state law.

"It's a huge movement, and I think all eyes are on Colorado, so hopefully the industry will collectively lead the way in the U.S. and show everybody that legalization is worth it," Khoury said. "This is unprecedented. We're definitely making history."

Colorado voters legalized possession, sale and production of marijuana in November, but retail sales have been prohibited until the state issues business licenses starting Jan. 1.

Tuesday was the first day applicants could file for retail business licenses, and the state processed 14 marijuana market applications.

The enforcement division also handled 14 applications for marijuana grow and cultivation facilities and one application for developing infused products like pot brownies.

Applicants brought in boxes of paperwork for their scheduled two-hour meetings with background investigators who pick through the paperwork before sending the applicant along to the next stage of the process.

Julie Postlethwait, spokeswoman for the Medical Marijuana Enforcement Division, said her recreational use officers are feeling the pressure of being the first in the nation to begin regulating recreational marijuana sales. Voters in Washington legalized marijuana as well, but that state won't start accepting applications for retail sales until December.

"We have really tried to be smart and efficient," Postlethwait said.

The appointments are going well and she said the state is poised to issue licenses to businesses by the first of the year. What happens at the local level - in cities and counties that have their own regulation of these businesses - is outside her hands.

So far, the Marijuana Enforcement Division has 99 appointments for businesses seeking at least one recreational license. State law passed during the 2013 legislative session limits recreational retail licenses only to those companies already operating medical marijuana businesses under a constitutional amendment approved by voters in 2000.

Khoury submitted five applications Wednesday. Although his company, MMJ America, owns three medical marijuana stores, one of the stores is in Boulder where the city has yet to adopt a local stance on pot shops.

Of the 99 appointments, all but four of them are for the city of Denver.

Colorado Springs and El Paso County have banned recreational marijuana sales along with more than 60 other local entities. That leaves the city's 86 medical pot places and the county's three unable to open recreational sales to citizens who don't have a prescription.

Postlethwait said 23 municipalities and 10 counties are allowing retail marijuana sales and that under state law businesses can apply for their retail sales license anywhere. So medical stores in Colorado Springs could expand to a recreational store in a city that allows the stores.

Denver, however, has limited retail stores to only those medical marijuana stores already operating in the city.

Khoury applied for two recreational marijuana licenses at each of his Denver locations, two grow-and-cultivation licenses for those stores and one license for infused products.

Between state fees and city of Denver fees, Khoury expects to pay $48,000.

"I think right now none of us have an idea of what recreational will do Jan. 1," Khoury said. "We all in the industry hope for a good day."

But Khoury said business has been good under the medical marijuana model where his company has worked since 2008 to provide the best product possible to those with a medical need for the herb.

If the city and state get Khoury his licenses by Jan. 1, he said his Denver stores will be ready and open for business.

"The ball is in their court," he said. 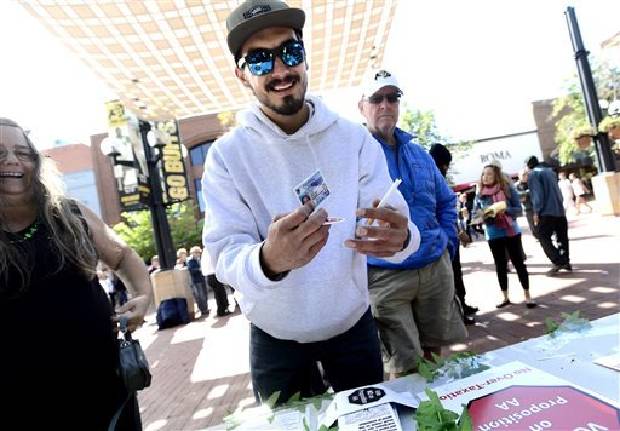 Dec 23, 2013
The General
T
T
More Than 100 Recreational Pot Shops Could Be Open In Colorado