June was the best-selling month yet for recreational pot in Colorado, with $24.7 million in total sales, according to state tax collections reported Friday. Recreational pot sales were up more than 19 percent from June sales, an increase likely attributable to more stores opening. Since January, Colorado has reaped $29.8 million in taxes from marijuana, according to June collections reported by the state Department of Revenue. That figure includes taxes, licenses and fees from both medical and recreational pot.

Recreational pot is inching toward medical pot in total sales. In January, Colorado's statewide sales tax on medical pot produced nearly twice the taxes produced by recreational pot. By June, the statewide 2.9 percent sales tax from medical pot brought in less than 20 percent more than the same tax on recreational weed. Estimates for how much tax revenue legal weed would produce varied widely, with no preceding legal pot taxes on which to guess sales.

An estimate sent to Colorado voters last year projected the annual tax collections from sales and excise taxes on recreational pot at $70 million a year. And in February, Colorado Gov. John Hickenlooper sent lawmakers a budget request that projected some $98 million in pot taxes this fiscal year, which began in July. In Washington state, where recreational pot sales started last month, pot sales numbers were also released Friday. That state reported 18 stores selling about $3.8 million worth of marijuana in July – a higher number than Colorado's first month of recreational sales. 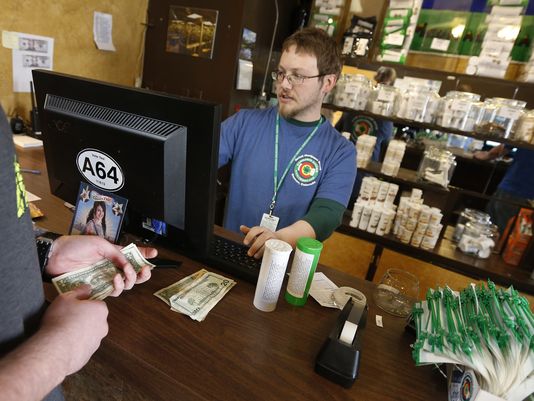