The new fees were proposed as a way to provide processing and maintenance fees that the city covers for the facilities. There were other proposed charges that will be under deliberation by the Council in 60 days, including two extra charges of $1800 each.

Audrey Hatfield, President of Coloradans for Cannabis Patient Rights (C4CPR), was not pleased with the new fees.

"I think this new fee is ludicrous," she said. Hatfield said that she believes the city is unfairly picking on dispensaries, which could have negative effects for the local economy.

"These businesses are barely breaking even as it is, and I've already heard from several businesses that will be closing as a result," Hatfield said.

Council-member Brandy Williams acknowledged the concerns, but said that the fees are necessary to pay for the amount of work that has to be done by the city clerk, especially for a business mired with so many regulations on a city, state and federal level.

"This is certainly a precarious situation, especially since it's still an issue undecided on many levels. Perhaps as things change, many of these fees may go away," said Williams, "Right now we're in an adjustment period." Williams also said that the fact that marijuana is still illegal on a federal level, further complicates the situation.
Williams said that currently the position of medical marijuana businesses is in a position of "limbo" as both the state and the city make slow movements on how best to regulate the growing industry.

Hatfield took a more cynical approach and said that she believes the new Colorado Springs regulations were driven out of "greed".

"The city and the state seem to spend a lot of time talking about how it is illegal, but they don't seem to mind the revenue they make off of it," Hatfield said. She also said that she was concerned by Mayor Steve Bach's stance on the business end of the discussion.

"He talks a lot about protecting small business, but that apparently doesn't include Medical Marijuana small businesses," Hatfield said.

Until the fees have been in place awhile, it will be difficult to see the long-term effects of the new fees on the over 100 dispensaries in the city. Williams sees the new fees as merely a part of doing business in the city.

Hatfield said she believes the new changes will have negative effects for cannabis patients as costs go up, and for the city as a whole if they lose revenue from the businesses.

"All I know is that in the past year and a half with the industry in our city, my streetlight finally turned back on." Hatfield said. 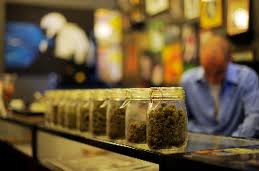