A state-produced study has concluded that high taxes and fewer stores are keeping Colorado medical-marijuana consumers from switching to the recreational cannabis market, a trend that, if it continues, will have a major impact on the state's predicted marijuana tax windfall. The study, released Wednesday, found that out-of-state visitors make up nearly half of recreational marijuana sales in the Denver area – and 90 percent of recreational sales in mountain resort communities. Tourists, though, account for only about 7 percent of the annual demand for marijuana in the state, which the study estimates at 130.3 metric tons.

"This study finds total marijuana demand to be much larger than previously estimated," the study's authors write in their report. The reason, the authors conclude, is that previous studies have underestimated the level of demand from heavy users. The new study finds that the top 22 percent of marijuana users in Colorado account for nearly 67 percent of the total demand. The bottom 54 percent of users account for only about 4 percent of demand. "The prevalence of heavy users in Colorado is higher than the national average," the authors write.

Overall, the study estimates that 487,000 people over 21 years old in Colorado, or about 9 percent of the state's population, use marijuana at least once per month. "The department feels it is important to understand marijuana usage and the demand in the state to effectively manage production within the regulated industry," Colorado Department of Revenue executive Director Barbara Brohl said in a statement.

The Marijuana Enforcement Division said it used survey results, demographic data, research literature and "Colorado-specific primary source data" to compile the study. Among the most significant conclusions listed in the report: Few people are switching from shopping at medical-marijuana dispensaries to shopping at recreational marijuana stores. The study concludes that could be because higher taxes for recreational marijuana and fewer available outlets discourage switching. "The retail demand is derived primarily from out-of-state visitors and from consumers who previously purchased from the Colorado black and gray markets," the study's authors write. The trend, though, has major implications for the state's marijuana tax revenue.

Predictions for revenue from recreational marijuana taxes once reached as high as $35 million for the first six months of 2014. Instead, including numbers released Wednesday for May tax collections, the state has brought in only about $14.7 million so far. Medical-marijuana sales, meanwhile, continue to outpace recreational sales. Through May, medical-marijuana dispensaries had done nearly $165 million of sales – compared with the $90 million from recreational stores. Tax revenue from medical-marijuana sales, though, has amounted to slightly less than $5 million. "Creating a system where people who are using cannabis medically can access their medicine without paying higher taxes is not a bad thing," said Taylor West, a spokeswoman for the National Cannabis Industry Association. 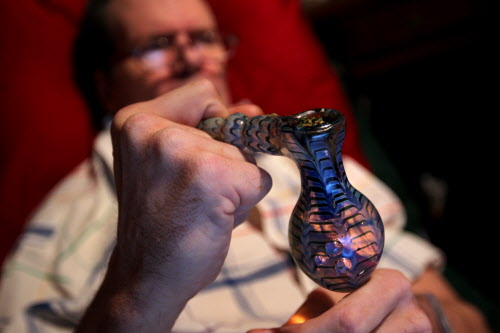