Billed as being the “World’s Largest Legal Cannabis Celebration,” the annual World Cannabis Week will be returning to Denver this coming April. The event, which will be the third one so far, will run from April 16 through April 20 in Denver, Colorado, and tickets and packages are now on sale.

World Cannabis Week is quickly becoming one of the foremost cannabis trade shows and conventions in the industry. It is a much-anticipated convention by both purveyors of marijuana and cannabis-related products and by people who enjoy partaking in the recreational use of pot, or who are prescribed the drug for medical reasons.

World Cannabis Week has gotten to be so famous that it is being called “the SXSW of marijuana.” Last year’s combined convention and celebration saw many innovative cannabis-related products introduced, and fans of marijuana flocked to Denver to partake in the excitement and fun that lasted an entire week.

One of the many marijuana-related products that was prevalent at last year’s World Cannabis Week convention was vape pens. The vape pens allowed people to use them with marinol, to enjoy the effects of THC smokelessly and discretely.

This year’s World Cannabis Week promises to be the best one yet, with hands-on workshops, industry experts, as well as three days of business conference presentations. Also, there will be VIP access to 420 entertainment ranging from nightly parties, great concerts at Red Rocks, access to the BIG Industry Trade Show, and the 420 Rally.

Besides all of the activities and events that will be going on the entire week in the Denver, Colorado, area, in celebration of World Cannabis Week, the organizers of the convention have arranged various package deals with cannabis-friendly hotels and transportation services. The organizers wanted to ensure that attendees will have a worry-free and paranoia-free experience while at the convention.

My 420 Tours is one of the big companies behind organizing the World Cannabis Convention. They have arranged a couple of different package options, the Immersion 420 or the 420 Entertainment ones, though attendees can still purchase tickets to the various events and activities without buying the packages that My 420 Tours offers.

For people planning on attending the World Cannabis Week convention who might be interested in the two packages, the Immersion 420 one costs $749 per person. That price is a bargain, as it is a $1,500 value. People who purchase this package can enjoy the three days’ worth of speakers at the convention, at Denver’s McNichols Building, which is next door to where the largest cannabis festival, The 420 Rally, will be. Also, people who buy this package will have access to the BIG Industry Trade Show, and the BIG Industry Trade Show Closing Party, both of which are not open to the general public.

Other activities that people who purchase this package will have available to them include attending a
dispensary and grow tour, VIP access to The 420 Rally, and a one-day ticket to the Cannabis Cup (any day April 18 – 20). As if that was not enough, also covered will be a 420 Concert on the Street featuring Cypress Hill, RedMan and Method Man, entry to six private World Cannabis Week parties, and even a 420 Gift Bag with sponsored products, though not including cannabis.

For more budget-conscious attendees of the upcoming World Cannabis Week convention, My 420 Tours offers their Entertainment 420 package, at a cost of $399 per person. That package does not include attending the three days of speakers at the BIG Industry Trade Show, though it does include admittance to the BIG Industry Trade Show Closing Party. Also, the dispensary and grow tour is included, and VIP Access to The 420 Rally, along with getting to attend the six private World Cannabis Week parties and the 420 Concert on the Street featuring Cypress Hill, RedMan and Method Man. The 420 Gift Bag with sponsored products is not included, however.

Anyone else interested in attending the World Cannabis Week convention can book rooms at 420-Friendly Hotels in Denver for rates starting at $179 per night. Included in the price is a vaporizer rental for in-room use, and daily 4:20 smoke lounge parties. A 420 Shuttle Pass good for four days, from April 17-20, will cost $99. The 420 CannaBus shuttles are another place attendees can legally smoke cannabis in a public place and will take participants to more than 15 stops like top dispensaries and other points of interest. The shuttles will be participating in giveaways and are being billed as being “an experience all their own.”

The upcoming World Cannabis Week convention in Denver, Colorado, will be an event that everybody who enjoys partaking of cannabis on a recreational basis or because of medical reasons will want to attend. It is also an annual convention where businesses that are related to manufacturing and selling cannabis-related products will want to add to their calendars.

The latest devices and marijuana paraphernalia will be on display at the World Cannabis Week convention, and the Red Rocks Amphitheatre will have a special concert on April 18 with tickets for $150 featuring performances by NAS, SOJA and JBoog. These are just some of the exciting and fun-filled activities that attendees at the convention will be able to experience. 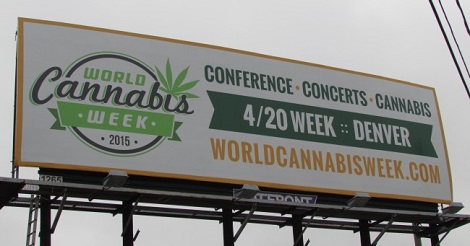 ME: Third Annual Cannabis Convention Rolls Out This Weekend

Fear And Toking: Pot Convention To Tap Into Growing Industry