Boosters of industrial hemp often fondly refer to the plant as a wonder crop, usable in everything from building materials to batteries to breakfast cereal. Since Colorado voters legalized both hemp and marijuana with the passage of Amendment 64 in 2012, hemp advocates have been buzzing about the state’s promise as a manufacturing hub for this dizzying array of products. Yet even as Colorado farmers make history this fall with the first legal commercial hemp harvest on U.S. soil in 57 years, it’s unlikely that much of their bounty will go toward the plant’s diverse list of potential uses.

Instead, hobbled by a longstanding federal ban on shipping hemp seed across state lines, most Colorado hemp farmers are squirreling away their seed supply, using this year’s harvest as a source of next year’s supply in an attempt to vastly increase planted acreage in 2015 with Colorado-grown seed stock.

“In an ideal world we’d grow between 1,500 and 2,000 acres of hemp next year, said J.R. Knaub, a 37-year-old farmer in the northeastern Colorado town of Sterling who has been growing corn, sugar beets and alfalfa for the last 20 years and this year planted around 2 acres of hemp. “But getting seed will be the biggest task we have to conquer.”

The federally-induced seed shortage has already stunted the growth of Colorado’s hemp industry: Last spring, farmers registered with the Colorado Department of Agriculture to plant nearly 1,600 acres of hemp. Yet seed shortages, poor germination rates and inexperience with the crop will limit their harvest this fall to about 200 acres, according to Zev Paiss of the Rocky Mountain Hemp Association. “This year, because it was so hard to get seed, people were buying whatever they could get a hold of, and it wasn’t always the best seed,” said Paiss. “Because of that, I’ve heard that the amount of germination farmers achieved varied widely.”

In light of the shortage, Colorado hemp farmers appear to be prioritizing seed saving this fall over other potential uses for their hemp crops. The state Department of Agriculture requires hemp farmers to submit a form at least 30 days before harvest detailing what they plan to do with their plants, and as of late September, 27 farmers had written that they plan to use their crop primarily for seed saving purposes. Just 14 farmers had plans to experiment with making construction materials, textiles, medicines and other hemp-based products, and only one farmer planned to sell seed to other growers this fall. (As this story was published, “harvest notification” forms continued to roll in from farmers around the state).

“We are at the very beginning of rebuilding a complicated industry,” said Paiss. “All the farmers are going to be holding on to their seed this year and building seed stock. There will be almost no seed available for sale to new businesses [next] year.”

The federal ban on hemp has its roots in the Controlled Substances Act of 1970. The act made it illegal to transport the plant or its seeds across state lines without a permit from the Drug Enforcement Administration, which can be hard to get. Since Colorado voters legalized industrial hemp in 2012, farmers have found ways to import seed from other countries, but many are reluctant to discuss the details of those legally nebulous arrangements. Plus, there’s no guarantee that seeds they import from hemp producing nations like Canada and China will successfully clear U.S. Customs.

There are cracks forming in the faÃ§ade of federal hemp prohibition: The 2014 farm bill contained a provision allowing colleges and universities to cultivate industrial hemp for research purposes without fear of federal interference, and 19 states have laws on the books permitting such pilot projects, according to the National Conference of State Legislatures. Eight of those states, including Colorado, California, Maine, Montana, North Dakota, Oregon, Vermont and West Virginia have passed laws removing barriers to more widespread hemp production.

If Colorado farmers can save hemp seed successfully this fall, the acreage planted there next spring should grow substantially from this year’s levels. Paiss says that the seed saved from two acres of industrial hemp should be enough to plant at least 20 acres next year, which he says is a conservative estimate. Bill Billings, the president of an eastern Colorado company called the Colorado Hemp Project, says depending on the hemp variety and production methods, two acres worth of seed could be enough for a whopping 400 acres next year. Even if the ban on seed transport persists, farmers will likely continue smuggling seed from abroad next year to supplement what they can grow themselves.

And despite the seed shortage, there are some plans afoot to use part of this year’s hemp harvest for research and development — it is possible, after all, to save some seed while putting the rest of the plant to immediate use. Over the next few years, Colorado entrepreneurs are hoping to build processing plants to make hemp-based pharmaceuticals, textiles, energy drinks and myriad other products.

Billings says he’s working with a Boulder, Colorado-based company to develop hemp-based carbon electrodes for batteries and other applications that could make expensive materials like graphene unnecessary. Ryan Laughlin, the farmer who harvested a much-publicized hemp crop on his Springfield, Colorado farm in 2013 before state hemp regulations were finalized, is selling this year’s harvest to Cannabis Therapy Corp. of Boulder, which makes hemp and cannabis-based pharmaceuticals. And a firm called American Hemp Ventures recently won approval to build an experimental hemp processing plant in Logan County in the eastern part of the state. Over time, the hope is to replace many imported hemp products with domestically produced alternatives. “Right now we import $580 million per year in hemp products into the U.S.,” said Paiss. “We are talking about tapping into a half-billion dollar industry over the next few years. 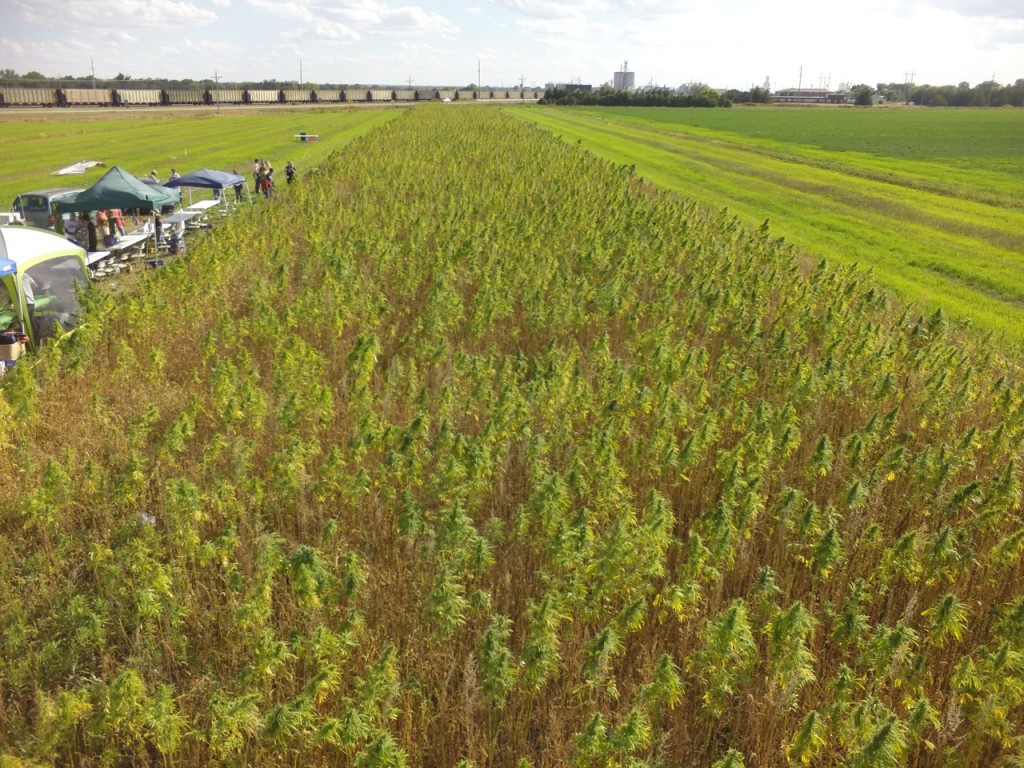 What a beautiful sight!

The illegality of Cannabis is outrageous, an impediment to full utilization of a drug which helps produce the serenity and insight, sensitivity and fellowship so desperately needed in this increasingly mad and dangerous world.