Marijuana sellers and growers in Colorado joke that it's rare for an industry to seek a tax on its own product – in their case, a 25 percent tax rate that goes before voters next month. Republicans, Democrats and large dispensary owners agree the taxes will boost state revenues and pay for the nation's first intense state oversight of the recreational pot business.

But not everyone is happy about the proposed sales and excise taxes, which, if approved, would go into effect when sales begin on Jan. 1.

A few dozen marijuana activists have banded together to oppose the tax rates, saying they're too high and will keep people in the black market. They've organized three joint giveaways, events that don't violate state law as long as the joints are free and recipients are over 21.

Their protests have been spirited. At a Denver joint giveaway this week, activists jeered dispensary owners who support the tax and even Democratic Gov. John Hickenlooper, who attended a $1,000-a-person fundraiser to support the tax campaign.

"If we overtax it, just watch. The whole thing's going to collapse and the black market isn't going anywhere," said Larisa Bolivar, a former dispensary owner in Denver and executive director of the campaign against the tax measure.

The Nov. 5 ballot measure includes a 15 percent excise tax and an initial 10 percent sales tax. State enforcement has been estimated to cost about $7 million.

Still, all sides agree that there's no way to know what the marijuana tax rate should be. Economists can only guess what pot users are paying now and how much they'd pay to shop in a regulated store, not grow their own or shop on the black market.

Economists at Colorado State University have warned the taxes may not raise enough money to pay for the state's proposed enforcement scheme.

In an April report, Colorado State's Colorado Futures Center predicted the rates won't make a big difference in the state budget. The forecasters used a higher rate than the one proposed to voters – a 30 percent combined sales and excise tax – and put the post-legalization price at $185 an ounce, including taxes.

They said that marijuana demand may not spike just because it's legal, depressing a possible tax windfall.

"Revenue from marijuana taxes will contribute little or nothing to the state's general fund," the report concluded. "There are likely to be offsetting effects of those attracted to marijuana or inclined to consume larger quantities because it is now legal and those who lose interest in marijuana now that the 'forbidden fruit' aspect of marijuana use is eliminated."

Washington state, the only other place in the U.S. that has legalized recreational pot, will tax retail pot at 75 percent. That rate was included in the ballot measure voters there approved last year.

Colorado's rate requires separate voter approval because of state tax law. Up to $40 million in excise tax is designated for school construction, with the rest designated for marijuana enforcement.

The architects of Colorado's marijuana amendment insist the taxes are fair. They pointed to a recent U.S. Department of Justice memo that makes clear states need vigorous pot enforcement to avoid federal intervention.

"The country is looking at us, and we have an obligation to create the greatest regulatory scheme we can," said Rick Ridder, a political consultant who attended this week's fundraiser.

They also point out that most folks don't use marijuana, so voters need an incentive to approve the drug that doesn't relate to their personal use.

"It's one of the primary reasons people support marijuana, to get the tax revenue to take this product out of the hands of cartels," said Brian Vicente, a lawyer who helped write the legalization measure.

Some lawmakers this spring feared that Coloradans would reject a tax measure, leaving the state with a hefty tab for enforcing pot sales but little cash to pay for it.

Despite the debate, the campaigns for and against taxes won't be too visible to most. Campaign finance reports filed with the state show the pro-tax side with just about $10,000 raised by the end of September. Those numbers don't include the recent fundraiser but likely won't allow television advertising, campaign managers said.

Pot tax opponents had less than $2,000 by the end of last month. That figure doesn't include an important "in-kind" donation – hundreds of free joints protesters say have been donated by an anonymous supporter. Protesters plan to keep handing out the joints until the vote Nov. 5. 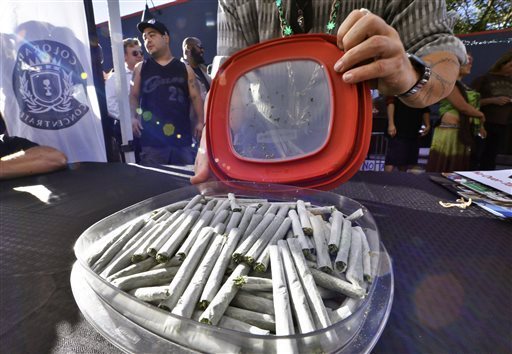