Kentucky Agriculture Commissioner James Comer says an increasing number of state legislators are lining up in support of legalizing the growing of hemp as a cash crop for Kentucky farmers.

Bills have been filed in both the Kentucky House and Senate to allow the growing of industrial hemp after licensing through the agriculture department.

Speaking before the Kentucky Commodities Conference in Bowling Green Friday, Comer told WKU Public Radio hemp is a crop with potential uses for industry, clothing, paper and more. The biggest problem, he said, is overcoming the opposition of law enforcement agencies that fear growing hemp could lead to an increase in marijuana growing. The two plants are almost identical and police say hemp would serve as a cover for marijuana plots.

Kentucky Senator Rand Paul, who also attended the Conference, has supported a federal bill in Washington to legalize the growing of industrial hemp. He told WKU Public Radio he plans to wait to see what the state legislature does first before pushing the bill on Capitol Hill. If it's approved in Kentucky, Paul said he would apply for a waiver from President Obama to remove federal restrictions.

Sen. Paul said hemp would be an especially good crop for farmers in eastern Kentucky to grow on reclamation lands from coal mining operations. 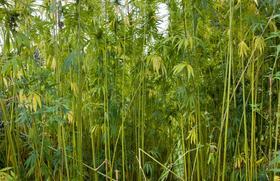