It's bed time for 13-year-old Viridiana. And as her parents, Roberto and Maria, read to her, they know their daughter's own story is different than a normal child's.

"She depends on us for almost, just about everything," says Roberto Ortego, Viridiana's dad.

And it's a story Viridiana can't share because seizures robbed her of the ability to talk.

She suffers from Dravet syndrome. It's a severe form of epilepsy that causes up to 15 seizures a day.

Scarier still is that Dravet syndrome can be deadly.

The Ortegas have tried every medication to stop the seizures, with no luck.

"When I leave this house, I say, Lord, in our hands I put my family and my life," says Roberto.

And now a possible answer to their prayers.

Dr. Scott Perry, a pediatric neurologist, enrolled Viridiana in the clinical trial for cannabidiol, a compound derived from marijuana plants. Unlike THC, another derivative of cannabis, cannabidiol doesn't produce a high.

It's been studied before as a treatment for epilepsy with promising results.

"We don't know how it works, to be honest with you. We do know that there are cannabinoid receptors in the brain, but this drug doesn't seem to interact with the receptors that we know of," says Dr. Perry.

The results: the first hard proof that it can help children with Darvet syndrome, which has no treatment.

During the trial, it stopped seizures in almost half the children like Viridiana.

"I think it's very exciting; cannabidiol has been a very hot topic throughout the use. This is real, the first hard evidence that shows that it can be effective," says Dr. Perry.

Viridiana has suffered fewer than three seizures in the last six months, and for the first time in years, she is trying to speak.

"Which is amazing for us, you know, see some progress like this," says her father, Roberto.

The Ortegas call it their miracle drug.

The study showed the presence of some fairly significant side effects while taking the cannabidiol, causing some patients to drop out of the study.

But overall, results have led doctors to believe the drug should be evaluated for use in treating other types of epilepsy. 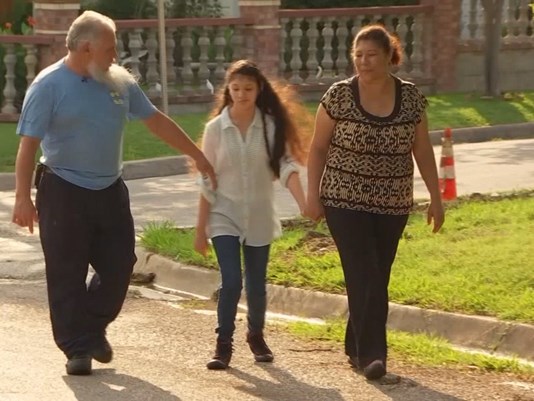