Growing industrial hemp in Kentucky is still illegal and farmers who do might subject themselves to potential criminal liability.

That, at least, is the opinion of the state's chief law enforcement officer, Attorney General Jack Conway, who says cultivation of hemp remains illegal under federal law, the Controlled Substances Act.

But Agriculture Commissioner James Comer doesn't see it that way.

"Hemp is legal in Kentucky, and the federal government has made it clear that it is not going to prosecute farmers for growing hemp. It makes no sense that Attorney General Conway would throw up an unnecessary government obstacle to an industry that has the potential to create jobs and revenue for Kentucky."

The controversy involves more than a legal issue, it's also political. Comer, a Republican, and Conway, a Democrat, are eyeing the possibility of running for governor in 2015.

Comer has championed the cause of industrial hemp, pushing legislation passed this spring by the General Assembly to allow the regulation and licensing of hemp.

After a recent "prosecutorial guidance" by the federal Justice Department telling federal prosecutors not to pursue criminal charges against small possessions of marijuana in states which have legalized the drug, Comer and an attorney for the state Agriculture Department, Luke Morgan, contend that means the federal government also won't prosecute cultivation of hemp.

Comer and Morgan also cite a 2003 federal Drug Enforcement Agency memorandum that says hemp is not marijuana and not covered by the Controlled Substances Act.

Conway disputes their interpretation, however.

"The 2003 memorandum and regulation by DEA deals with hemp products," Conway said. "But it makes it very, very clear that the cultivation of hemp remains illegal."

Conway issued his opinion in response to a request from Kentucky State Police and Gov. Steve Beshear. The governor issued the following statement after Conway's announcement:

"The Attorney General's interpretation of the federal law is consistent with our understanding. It's clear that a formal change in the federal law is needed before our farm families can reasonably consider growing this crop. Our new state law means Kentucky farmers are positioned to respond immediately when and if that change occurs, putting them ahead of other states without similar legislation."

But Holly von Luerhte, spokeswoman for Comer, said Conway's opinion "makes no sense. We disagree on the interpretation of the 2003 memorandum.

"At a time when the state police can't afford to put gas in their cars, are they really going to arrest farmers for growing hemp?" she asked.

But Conway said his job as attorney general "is to state what the law is, not what I would want it to be. Federal law preempts state law, and federal law makes it illegal to grow hemp."

He said he supports the cultivation of hemp if Kentucky can secure a waiver from the federal government as Hawaii did several years ago and so long as it is licensed and regulated in such a way that police will know where it is legally grown.

But, he said that still requires a change to the federal Controlled Substances Act or a federal waiver.

"Any individual or entity that invests in anticipation of growing industrial hemp in the near future, and any individual or entity that intentionally grows hemp within the commonwealth, will expose themselves to potential criminal liability and the possible seizure of property by federal or state law enforcement agencies," Conway wrote in his opinion.

As part of the legislation passed in the 2013 General Assembly, the resurrected Hemp Commission is ready to write licensing and regulatory guidelines for hemp cultivation. After the recent opinion from Morgan, the KDA attorney, the commission said it plans to ask for some "tweaks" to the 2013 law and expects hemp cultivation to begin next spring.

Most polls show widespread support for cultivating hemp in Kentucky and Comer and other backers say it could offer an economic boon to Kentucky farmers. But a recent University of Kentucky study found it's unlikely to create many jobs. The study said there is potential for farmers to make a profit from hemp seeds but not from growing hemp for its fiber. 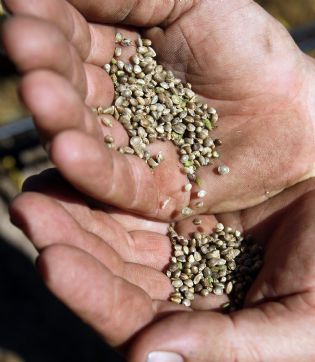