Could A Legal Quirk Bring Cannabis Tourism To Switzerland

Visitors to Switzerland are usually attracted by the promise of picturesque chalets and mountain hikes. But now they could have another, more unlikely, reason to pay a visit: cannabis.

A Swiss supermarket has become the first major chain in the world to start selling cannabis cigarettes. Coop Cooperative shoppers can now grab a pack of the cigarettes along with their artisan chocolate and GruyÃ¨re cheese.

Cannabis with less than 1 per cent THC is legal in the country — that's higher than the 0.2 per cent legal limit in most other European countries. The cigarettes also contain a high level of the other component found in hemp and marijuana, cannabidiol (CBD).

These CBD-rich cigarettes have a mellow effect and are thought to be useful in treating pain and panic attacks.

Coop introduced the cannabis cigarettes in a handful of its stores earlier this month, and have already sold out. It is now extending the sales to its 700 stores across Switzerland.

"We were surprised by the large demand," said a representative of The Coop. "We already offer several hemp products like hemp ice tea and beer. There is a demand for hemp products because of its unique smell and taste. That's why we also decided to offer CBD-cigarettes to our customers."

The "Heimat" cigarettes are made by Swiss company Koch & Gsell, which claims they're the first cigarette containing cannabis to be sold in a normal supermarket.

"We are still overwhelmed by the interest in our cigarettes," said marketing director BjÃ¶rn Koch. "People from around the globe contacted us about our new cannabis cigarette. The empty shelves at Coop show that people here in Switzerland seem to like the product."

Sarah Roloff from Switzerland Tourism doesn't expect the cigarettes to have a serious effect on tourism to the country. "The primary travel motivation of tourists who come to Switzerland is the beauty of nature and its landscapes and this will remain so in the future," she said.

But Koch is more hopeful. "We are pretty sure that many people living at the Swiss border in Germany, Austria, France and Italy will make a short trip to taste the cigarette. We are not sure if people living further away from Switzerland will take a long journey only because of the cannabis cigarette. But it is surely is an additional argument to spend some time here: smoking a cannabis cigarette while eating some cheese and enjoying the impressive view in the mountains." 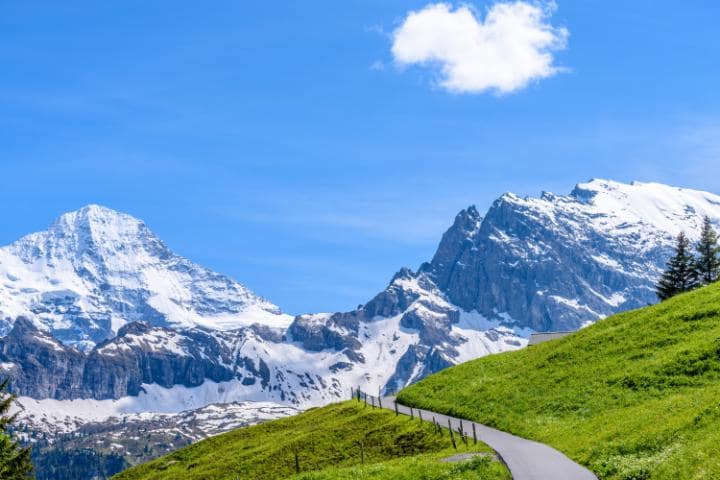 Switzerland: Cannabis Cigarettes Are Being Sold Legally At This Supermarket Chain

M
Cannabis Should Be Sold In Shops Alongside Beer And Cigarettes, Doctors' Journal Say

UK/Switzerland: Death was not caused by cannabis