Tennessee Titans linebacker Derrick Morgan has earned his living with brutal hits on the football field. But the husband and father of two would like to prevent those hits from haunting him in the future.

"I love the game. Don't get me wrong. But we didn't know at the time what the inherent risks were," Morgan said.

Doctors have linked the chronic, degenerative brain disease known as CTE to repeated head trauma. Morgan has been following reports that cannabidiol, or CBD, may be able to help.

CBD is a compound that comes from the marijuana plant. It contains so little THC, the psychoactive component of pot, its manufacturers claim it technically doesn't even qualify as marijuana under federal law, reports CBS News' Dana Jacobson.

It's helped control seizures among some children with epilepsy, but we don't know if it can help protect athletes' brains from traumatic injuries.

"What about what you were learning said to you, 'This may be a viable option?'" Jacobson asked.

"For me, it was the neuroprotectant qualities of it," Morgan said. "It's not about getting stoned. It's not about, you know, guys getting high and abusing it. It's about the medicine behind it."

Despite a growing number of states legalizing marijuana for both medical and recreational purposes, it is still a banned substance in the NFL.

Morgan is the only active player publicly calling on the NFL to look into the benefits of CBD. He joins a number of retired players like former Broncos quarterback Jake Plummer, who started taking CBD oil last year to deal with nagging headaches.

"I was open for anything at that point to try. And once I tried it and was consistent on CBD, that's when I realized, 'Wow, this stuff works,'" Plummer said.

Plummer claims it helps him avoid using traditional painkillers and insists the NFL should look into this if it cares about the safety of its players.

"It's really a no-brainer. It's an awful way to say this, but it is: It's a no brainer for the brain. Save the brain, you save the game," Plummer said.

"No. It's too much of a risk as far as with our substance abuse policy that we don't know how it's going to show up on a test," Morgan said.

In a statement, the NFL said its "top priority is the health and safety of our players" but that "medical experts have not recommended making a change or revisiting our collectively-bargained policy and approach related to marijuana."

Any change to the league's drug policy would require a revision to the collective bargaining agreement with the NFL Players Association. NFLPA assistant executive director George Atallah says it's important to take a methodical approach to the issue.

"I think that we can't get ahead of the medical and scientific community on this," Atallah said.

"Where are you in the process of research right now?" Jacobson asked him.

He's collecting surveys from current players to see how the athletes deal with pain. Vandrey said we still have a lot to learn about the long-term impact of medical cannabis.

"It may be beneficial for a number of these health conditions, but it may also be harmful," Vandrey said. "We don't have a good enough of an understanding. There isn't enough data for us to be able to predict for any one person, is it going to be more helpful than harmful?"

How you study the impact of a drug on NFL players when they aren't allowed to use it is the quandary for supporters like Morgan.

The NFLPA has formed a committee to study alternative forms of pain management. Morgan is planning to serve on that committee. But for now, there is no clear timeline on if or when CBD might become an acceptable treatment option for NFL players. 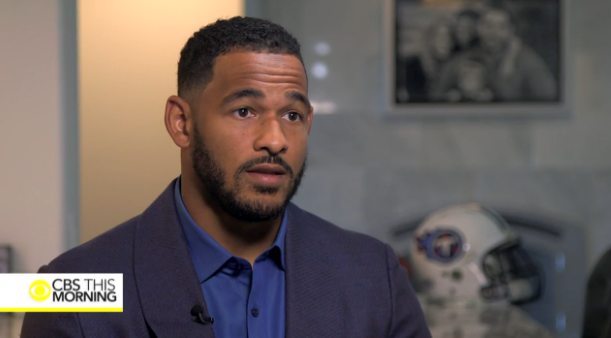 R
NFL Players Could Turn To Hemp, Rather Than Marijuana, To Help With Brain Injuries