Could Va. Reap $500 Million Per Year By Legalizing Pot?

When the media first learned of the bill by state Del. David Englin (D-Alexandria) to explore the tax revenue possibilities of marijuana, many leapt to the erroneous conclusion that Englin wanted to legalize it. Lawmaker wants pot sold in Virginia liquor stores, one local daily wrongly barked.

But as many states, and the District, move toward legalized marijuana, at least for medical purposes, Englin merely wants Virginia to study how much tax revenue our state could pull in when it's cutting budgets everywhere and our roads are in a shambles.

There have been a number of academic studies investigating two main aspects of the fiscal benefits of legal pot: the tax revenues gained, and the money saved from police, courts and corrections not having to deal with marijuana violators anymore. I've waded through many of these analyses.

And combining the data from the most definitive of these studies, here is my fiscal starting point: Virginia could reap more than $250 million a year in "sin tax" revenues on regulated marijuana sales, and save another $245 million in enforcement costs. That's roughly $500 million a year. Granted, Virginia's statewide budget is about $42 billion a year. But $500 million would build and fix a lot of roads and buy a lot of classroom computers.

Englin's bill calls for the formation of a joint subcommittee to study the feasibility of selling marijuana through state ABC stores, the same way Virginia has monopolized liquor sales, and the "potential revenue impact upon the Commonwealth." The subcommittee could spend no more than $15,040.

"I'm just trying to find out how much revenue," Englin told me, "so we can have an intelligent conversation moving forward." He said that over the years, numerous constituents in his district, which includes parts of Alexandria city, Arlington and Fairfax counties, have raised the question of legalization as a way of raising money for the strapped state.

"I'm operating in a world with a conservative Republican majority who refuse to raise any taxes," Englin said, "and so we see cuts to human services and education. And those cuts fall disproportionately on Northern Virginia. We clearly need revenue. How much revenue are we talking about?"

Englin also raised the point often raised by legalization proponents, that "essentially we're operating under marijuana prohibition. And what we know from history is that prohibition benefits the criminals. We know we have respectable citizens who are smoking pot. They're getting it by giving money to criminals. Seems to me we should at least have an informed conversation."

Some of this conversation has been going on in other parts of the country, often led by Harvard economics professor Jeffrey A. Miron, who also writes for the libertarian Cato Institute. Miron has long argued against marijuana prohibition, and his 2005 paper, "The Budgetary Implications of Marijuana Prohibition" has been a touchstone of debate in the media and elsewhere.

Miron, both in that paper and in an expanded version in 2010 looking at the financial implications of all drug prohibition, uses data from a variety of sources to estimate tax revenues and financial savings both nationally and state-by-state. But he has stayed with a figure of $6.4 billion in tax revenue nationwide which many feel is absurdly low.

Jon Gettman has a Ph.D. in public policy and economic development from George Mason and is a former head of the National Organization for the Reform of Marijuana Laws. His 2007 paper "Lost Taxes and Other Costs of Marijuana Laws" used a deeper variety of law enforcement and drug survey numbers to show that Miron vastly underestimated the amount of pot consumed by Americans.

Gettman did not do a detailed analysis on the law enforcement costs of marijuana, as Miron did. In Virginia, Miron estimated that we spend $761 million per year fighting the drug war, and that $245.6 million was spent strictly on marijuana enforcement, prosecution and incarceration.

In 2010, Miron's state-by-state breakdown of lost tax revenue estimated that Virginia was forfeiting $54.75 million annually. But if Gettman's analysis is correct – that Miron's numbers are only 20 percent of the actual lost revenue – then Virginia is really missing out on more than $250 million in tax revenues.

Gettman points out that there are social costs to marijuana use, particularly for teens and the mentally ill, but both Gettman and Miron say studies show that legalization does not increase usage. Gettman notes that legalization would restore the capital flow from illicit markets to legal, taxable channels; would likely deflate teen commerce in marijuana and contribute to a reduction in availability for adolescents; and shift the costs now associated with marijuana use from all taxpayers to the marijuana users themselves.

Lory Kohn, who runs the Web site Cannabis Commerce.com, has written extensively about these issues and also has attacked Miron for being too conservative in his estimates. He has a library of academic studies here.

But as we know, the Virginia General Assembly is controlled by Republicans, and they do not seem inclined even to do the financial study. "It's a tough sell," Englin admitted. And House Speaker Bill Howell (R-Stafford) told the Associated Press Monday that prostitution and gambling could raise revenue too. But "I think those are all detrimental to society," Howell said, "and probably not the kind of thing that the state ought to be involved with and I think the same thing with legalizing marijuana." 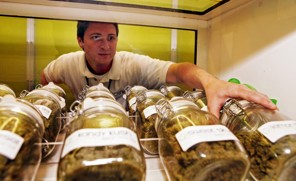 Marijuana Could Be A Gusher Of Cash If We Treated It Like A Crop, Not A Crime

T
If You Support Legal Marijuana, Memorize These 13 Stats