San Bernardino County became the latest jurisdiction to ban medical marijuana dispensaries following a unanimous vote by the Board of Supervisors on Tuesday.

The board approved the ordinance after about two hours of testimony, mostly from opponents who said it would leave medical marijuana patients without any safe way to get cannabis legally. They suggested that the county instead create regulations to allow dispensaries to operate.

"Your preference is to set up a law you know people will break," Ron Deziel, a Yucaipa resident and medical marijuana patient told the board.

But Lori Green, a Yucca Valley resident and member of the Inland Valley Drug Free Coalition, urged the county not to give in to "marijuana pushers" and thanked the board for approving the ordinance.

"More harm than good will be brought to a community that allows marijuana to be legitimized," she said.

Supervisors voted without making comments or engaging in debate.

California law allows patients with a doctor's recommendation to use marijuana to treat a variety of ailments. But most Inland cities and Riverside County have approved bans or moratoriums on dispensaries.

State law permits collectives, which are nonprofit cooperatives of patients and growers, but allows governments to regulate for-profit dispensaries through local zoning laws.

But opponents have said that the county's proposal is one of the most restrictive because it defines collectives as dispensaries.

The county's ordinance defines dispensaries as any group of three or more people involved in cultivating or distributing marijuana. It also bans outdoor cultivation, a provision that opponents said conflicts with state law that allows patients to grow up to six plants for personal use.

Critics said growing indoors would be too expensive due to the cost of equipment and electricity use.

"I live on $800 a month," said Wanda Smith, of Phelan, who uses marijuana for medical ailments. "I don't have money to put up a greenhouse."

The county ordinance does include an exception on its ban for state-licensed health facilities, such as nursing homes or hospices.

But medical marijuana advocates said that exception is meaningless because such facilities usually receive federal funds and therefore are prohibited from providing marijuana.

"You say it's not a ban but you're wrong," said Cheri Sicard, a former Big Bear Lake resident who recently moved to Long Beach. "You're doing everything possible to restrict access."

Federal law bans marijuana use for any reason, one of the issues cited by jurisdictions such as San Bernardino County in proposing a ban.

With similar ordinances in most Southern California cities and counties, allowing for dispensaries in San Bernardino County could result in the area becoming "a dumping ground" for marijuana sales, said Jim Squire, the county's deputy director of land use services.

"Failure to maintain similar standards (as surrounding areas) will be an open invitation to individuals who want to exploit our laws for personal gain," said Fontana Police Chief Rod Jones, president of the San Bernardino County Police Chiefs and Sheriffs Association.

The county has had a moratorium for two years but several dispensaries have opened. The county has shut down four so far, Squire said.

Opponents, who held a rally in front of the County Government Center before the meeting, have long been critical of San Bernardino County's policies on medical marijuana.

The county was one of the last in California to implement a state program providing identification cards to medical marijuana patients. It agreed to do so in June 2009 after losing a three-year legal battle when the U.S. Supreme Court declined to hear the county's challenge. 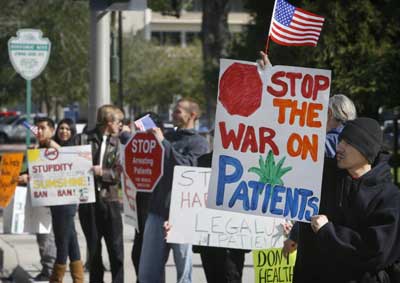 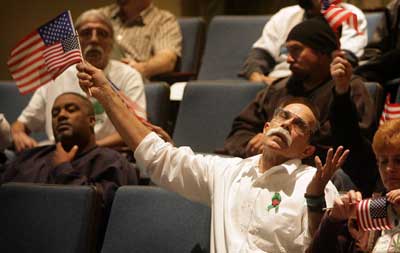 Abel Chapa, president of the San Bernardino Patients Association in Chino, throws his arms up in frustration during Tuesday’s Board of Supervisors meeting. 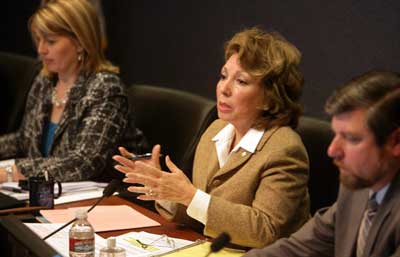