Then I will post pictures of all the buds after harvest, and I will take pictures of the hash made out of all of it and everything. The videos will be made more regularly than the pictures though. 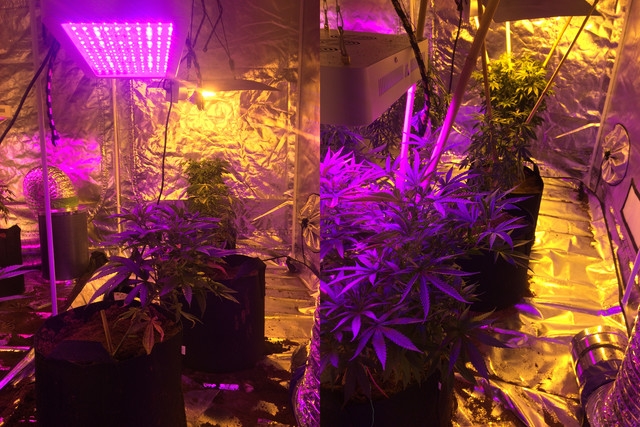 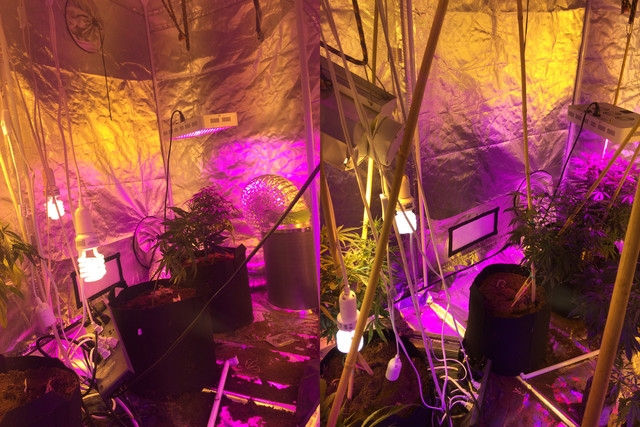 I just got some Insect Frass, it is used for other plants, but apparently it's not at the Home Depots and Walmart Garden Centers near me in Denver, and the other Garden Places said they didn't have it either, but Ultimate Hydroponics and Organics has it, and it seems like they just started stocking it because they have samples and gave me an extra sample pack. So if anyone needs Insect Frass around Denver, it may be used for other plants, but you probably won't find it unless you go there.

Here is more information about what Insect Frass does, and I will make a video later and then do updates so everyone can see what the effects are: 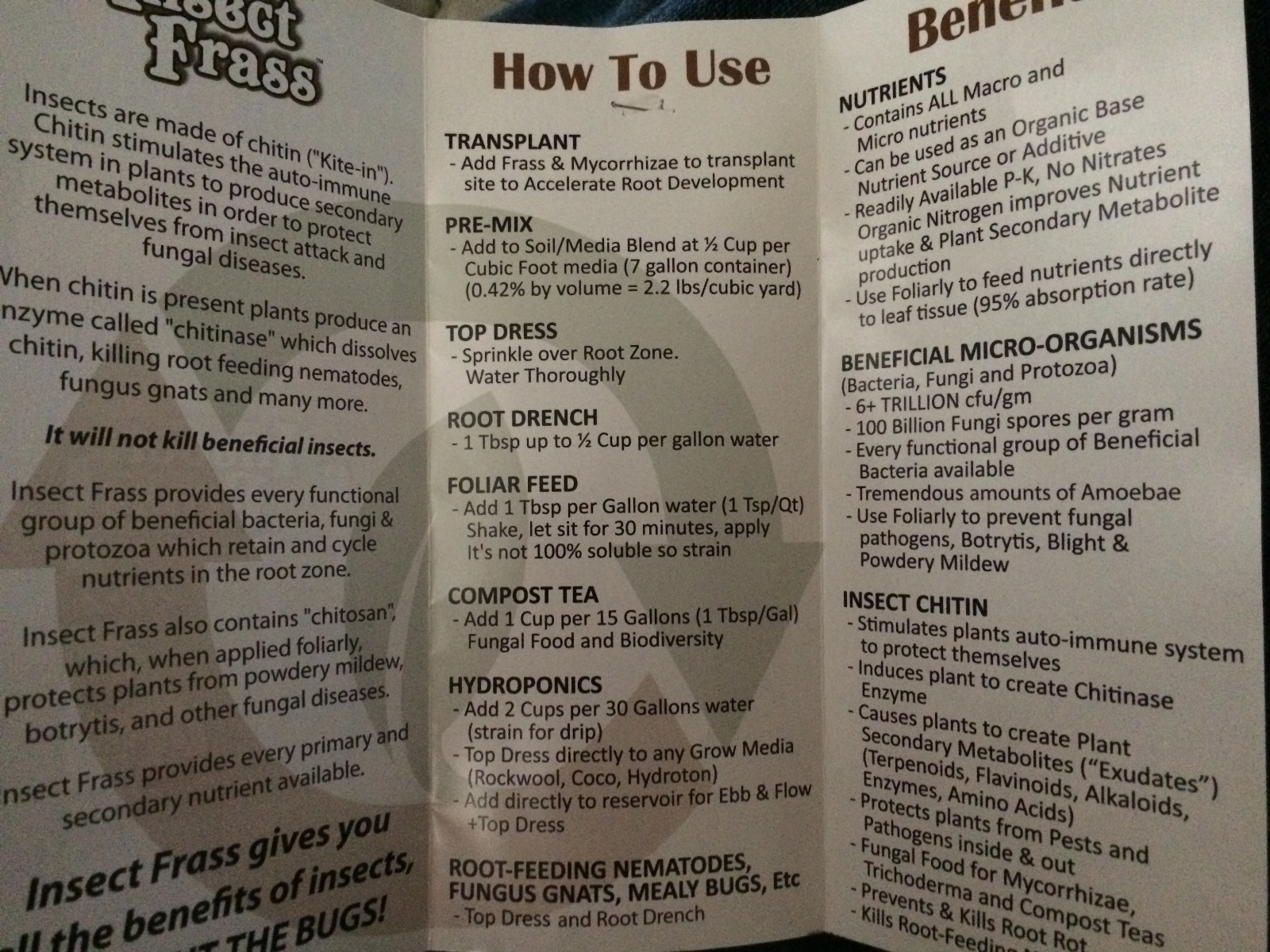 I just went and resprayed specifically at all the bud sites. Just so that the bud sites for sure get the Bloom Stimulant effect.
DEA Religious Exemption Process

Another update coming soon, but I just wanted to mention that once the plants Start growing hairs and getting Trichs, I will start taking more pictures. And I will take Pictures today or tonight in order to show the "Frass Day 1", so that I can do before and after pictures in a few weeks.

But once the buds start forming (hairs and trichs) I will start taking pictures whenever I make a video.
DEA Religious Exemption Process


Tetrahydrocannabivarin (THCV, THV) is a homologue of tetrahydrocannabinol (THC) having a propyl (3-carbon) side chain instead of a pentyl (5-carbon) group on the molecule, which makes it produce very different effects from THC.[1] This terpeno-phenolic compound is found naturally in Cannabis, sometimes in significant amounts. The psychoactive effects of THCV in Cannabis preparations are not well characterized.

Unlike THC, cannabidiol (CBD), and cannabichromene (CBC), THCV doesn't begin as cannabigerolic acid (CBGA). Instead of combining with olivetolic acid to create CBGA, geranyl pyrophosphate joins with divarinolic acid, which has two fewer carbon atoms. The result is cannabigerovarin acid (CBGVA). Once CBGVA is created, the process continues exactly the same as it would for THC. CBGVA is broken down to tetrahydrocannabivarin carboxylic acid (THCVA) by the enzyme THCV synthase. At that point, THCVA can be decarboxylated with heat or UV light to create THCV.

GW Pharmaceuticals is studying plant-derived tetrahydrocannabivarin (as GWP42004) for type 2 diabetes in addition to metformin.

And THCv makes the Perfect National and International Religious Marijuana Breeding Target, because...

It is not scheduled by Convention on Psychotropic Substances

And I am Breeding it Religiously, so according to USC Title 42 Chapter 21C, it is Religious Exercise.

And since I am the only one in America, maybe the World, Breeding to raise THCv content, if they make a THCv law, they will be Covertly or Overtly Banning Religion. So they can't Ban THCv just because I am doing this, according to the law.
DEA Religious Exemption Process

I mentioned this before, but in the next Flower Cycle I will be buying some seeds of a Strain that I will start Vegging. I am not going to say what it is until I start making videos about it, but once everyone realizes what I am mixing these African Strain Crosses with, this is really going to get crazy; and people are going to realize that they want THCv strains.

Also,
Look up "Skinny Girl Marijuana". I have been planning this since way before this, and have blog posts and everything about it being used for weightloss and I was comparing it to Hoodia Gordona, which is that Cactus everyone was using for weightloss. But Bethenny Frankle said that she was going to make a Weightloss Marijuana, which is actually what I am doing. This is going to be "Skinny Girl Marijuana" and it is going to be Strawberry Flavored.

If anyone here knows how to Navigate Unix and Compile Code, let me know, and we can start a Temple Currency
How to Create Your Own Currency

If no one can, I am going to just rent some Server Space soon and Create a Cryptonote.
DEA Religious Exemption Process

And just in case anyone doesn't understand what "THCv is Unscheduled" means, it means it is Unregulated. You could sell it to a Cop.
DEA Religious Exemption Process

Right now I am using these lights

But I am going to get a Ceramic Metal Halide soon, and probably replace the 100W HPS with it.

Here is where to buy a CMH for a good price, it is probably not the best, but it is a good price


315W CMH is supposed to be Equivalent to 1000W HPS, because Ceramic takes the Heat better, and so less energy is put into heat. They also do not get as hot as a 1000W HPS.

Here is a post from this site that shows the Spectrum Differences
Ceramic Metal Halide vs HPS
Last edited by a moderator: Jan 18, 2020
DEA Religious Exemption Process

I was just looking into Fertilizers and was looking for Bud Stimulants and stuff, and I found something called Bud Hardener on a Website called Kelp4Less but it says its not a secure site. So I looked for Kelp Fertilizer other places, and apparently Kelp is a good Fertilizer. 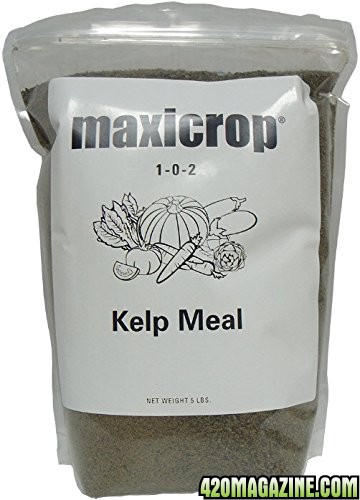 Doing more research and there is a Chemical called Cytokinin, and apparently it is in a Canadian variety of Kelp called Ascophyllum Nodosum, which contains higher amounts if harvested at the right time.

But apparently you can also get it from labs in China in pure form, and from what I am reading it seems like it is saying that it causes plants to Bloom even inside Petri Dishes, like you could cut a bud from a plant, put it in a Petri dish with Agar, put some Cytokinin on it, and it would Bloom.

But it is in Kelp and you can order it in Pure form from over seas.
DEA Religious Exemption Process

Tryptophol and Indole-3-Carbinol could also possibly be used. I am also going to try to get a list of Amino Acids like what they would put in those Amino Acid Nutrient Blends.

Btw, if anyone wants to do something basic that will increase your Nutrients, you can get Chelated forms of pretty much any Metal, and that is the form plants need in order to absorb the Metal. And most Nutrients only have like 3 kinds of Metals at most, but you could add more.
DEA Religious Exemption Process

Ok, so Auxins and Cytokinins are the 2 Types of Plant Regulators we are looking for for Marijuana Growing, this is not for Organic Growers, but there could be Organic Sources for all of this stuff, as they are Plant Hormones and should be easily found in Plants.

I will try to do this for this grow, but I might wait until after this grow, because I don't want to spray things on the buds when they have Trichombs forming and everything. So this may wait until next grow Cycle (at the end of this grow).

But I found an Auxin and a Cytokinin that can be bought online, not from a lab overseas on Alibaba or something, but just through a shopping cart online. I am not saying these are the best Auxins and Cytokinins, I am just saying that they are available. Once more people start using these maybe we can find out which ones actually work best with Marijuana.