Hartford, CT — A first-of-its kind research study that will test the effectiveness of using medical marijuana in place of oxycodone in patients suffering from pain from multiple rib fractures will be done at St. Francis Hospital and Medical Center.

The Connecticut Department of Consumer Protection (DCP) announced recently approval of the research program, which will treat patients with post traumatic acute, subacute and chronic pain from rib injuries.

The Saint Francis medical marijuana project was announced a few days before The Connecticut Hospice, Inc. in Branford announced that a medical marijuana program there had been approved by the federal government to conduct research with the goals of improving pain management and reducing opioid usage in palliative care.

The project proposed by Saint Francis Hospital and Medical Center is the first to be approved by the DCP under the new law.

"The opioid epidemic is devastating families and towns across the country," Dr. John F. Rodis, president of Saint Francis, said.

"We need to find alternate methods to effectively and safely treat illnesses and diseases that can save lives and not ruin them. I am very proud that St. Francis Hospital is at the forefront of this research, which is an integral part of our mission to be a transforming healing presence in the communities we serve," said Rodis.

Described as an "ongoing scourge on Connecticut families," Dr. James Feeney, director of Trauma Services at Saint Francis Hospital and Medical Center, said they believe they can help.

"There is decent evidence to suggest that cannabis would work for pain control in the acute setting, mostly from Europe but some really weak yet tantalizing stuff from Canada," Feeney said. "However, none of it is the formal, high grade medical research that we would look for to accept a treatment as safe and effective within the medical community."

Feeney said the way the study will work is "patients will get to choose their arm of the trial (marijuana or standard treatment with opiates), and we will compare total opiate use and overall effectiveness between the two groups (marijuana vs. opiates)."

"For the pilot program we will treat 30 patients in the intervention arm and 30 in the control arm (30 get medical cannabis, 30 get standard opiate therapy)," said Feeney.

In ordered to accept marijuana as a pain control medication that could replace opiates, there would have to be a series of "randomized controlled double blind" trials - which Feeney described as the "gold standard for medical research."

That means, neither the patients nor the doctors would know which medication the patients are taking ("double blind").

"The patients would be assigned randomly ("randomized"), to exclude bias, and we would have both a standard treatment and an intervention arm and the standard arm takes a placebo made to look just like the intervention drug (marijuana) (this means the study is "controlled" or in this case more specifically "placebo controlled")," continued Feeney.

"Before we can even do that, we have to establish some efficacy to marijuana with a pilot program. Right now we are at the stage of this pilot phase. That is what is approved by the state," said Feeney.

He said they expect more programs like the one developed by Saint Francis in the coming months.

Treating opioid addiction, and mental illness, has been a big newsmaker recently — both in Connecticut and nationally.

On Dec. 13, President Barack Obama signed the mental health reform bill into law, which includes $1 billion to combat the opioid addiction crisis in the country.

The bill won broad, bipartisan support in both the Senate and House of Representatives. 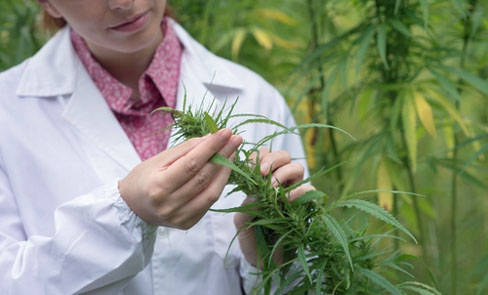