Possession of less than one ounce of marijuana was formally decriminalized in Washington, D.C. on Friday. Getting busted with a few grams of weed will now run D.C. residents $25, less than the cost of a litter citation. The decriminalization law, introduced by D.C. City Council member Tommy Wells and passed by the Council in March, significantly reduces the penalty for small-scale possession, which previously included fines of up to $1,000 and potential jail time.

Police in D.C. can still confiscate marijuana if it's "visible," and smoking on a street, park, sidewalk, or in a vehicle still carries the risk of arrest. (Maximum penalties for smoking marijuana in public include a $500 fine and 60 days in jail.) Officers can't frisk, request a warrant or arrest someone solely based on the smell of marijuana anymore, either; the new law says such measures are necessary only if someone is believed to be driving under the influence. Decriminalization is the latest in a string of measures aimed at reducing penalties for marijuana use in the district, and puts D.C. in line with 16 other states that have decriminalized pot. In September, D.C. At-Large Councilmember David Grosso introduced a bill that would allow the city to tax and regulate legalized marijuana–which has not yet been passed–and medical marijuana has been legal in D.C. since 2010.

While pot enthusiasts eye the latest bill as a step towards future legalization–an idea that has polled well in D.C. and could appear on the ballot in November–the new law's primary directive is to quell the racial bias currently present in the district's arrest rate. "The essence of this decriminalization law is the staggering racial disparity regarding arrests," Matt Cohen, editor of local blog DCist, told Newsweek, "That's why the council is pushing for it–for police reform."

The numbers make a compelling case. A report from the American Civil Liberties Union last year showed that D.C. led the nation in marijuana arrests in 2010. It also revealed that black males are eight times as likely to be arrested for marijuana possession as whites in D.C, although actual marijuana use is split more evenly between races–12 percent of whites and 14 percent of blacks reported using the substance. But there are complications on the horizon. Marijuana possession is still a federal crime, which may prove tricky in D.C., a city with deep federal roots and plenty of federal land, including the National Mall and the Lincoln Memorial. At a House of Representatives hearing in May 2013, Robert MacLean, acting chief of the United States Park Police, stated that people carrying marijuana on federal land could face up to six months in jail and a fine of $5,000.

"People are completely unaware of those lines and those consequences," said D.C. resident Damon McCollough. DCist's Cohen believes that many residents are ill-informed; he says some think the decriminalization law means pot is now plainly legal. The real road to full legalization remains thorny. Maryland Rep. Andy Harris recently amended a House budget bill to stop the district from utilizing taxpayer funds to enforce the decriminalization law, though it is unlikely to pass the Senate and has been publicly denounced by President Barack Obama, who cautioned Congress to not interfere with the city's laws.

Meanwhile, Washington City Paper is offering to cover smokers' $25 possession fine, citing curiosity as to how the law will be enforced. To cash in, busted smokers must send a photo of the citation as well as details on where and why they were stopped, how the police found marijuana on them, whether it was confiscated and if the police were aware of the new law. The offer is also first-come, first-serve for five people; since the Paper first pitched it on Thursday, Editor Michael Madden says no one has come forward. 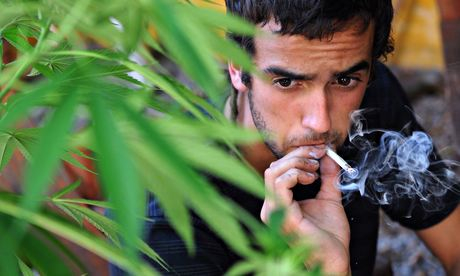