Shekina PeÃ±a once was a registered nurse at Sparrow Hospital.

Ken Van Every had been a vice president of a marketing firm and advertising agency.

And selling marijuana used to be illegal in Michigan.

That changed in November 2008, when Michigan voters approved a ballot proposal to legalize the medical use of marijuana. Along with giving people a legal way to use the drug to ease the aches and pains of cancer, AIDS and other diseases, the new law ushered in a wave of entrepreneurs legally doing business in what had been an illegal industry.

PeÃ±a and Van Every joined a group of budding entrepreneurs, opening medical marijuana dispensaries, clinics and supply houses and selling equipment to people licensed to grow and use marijuana.

"It was an opportunity to get in on the ground floor," said Van Every, who opened the Compassionate Apothecary of Lansing, 2201 E. Michigan Ave., in August 2010. "It should be considered just like any other type of business."

But like many new things, the introduction of medical marijuana has not come without controversy. It swirls like smoke around Lansing's East Michigan Avenue, a stretch of road that has seen at least a dozen medical marijuana businesses crop up in the past year or so.

Dispensary owners claim their shops, often located in buildings that had been abandoned for months or years, draw visitors to Lansing from such places as Mackinaw City, Traverse City and Alpena, along with other states. And some owners of non-marijuana businesses say they're seeing some of those people also spend time in their shops.

But not everyone is a fan of the new marketplace. A group of eastside neighborhood organizations and businesses, including animal and food testing company Neogen Corp., is trying to snuff out the marijuana mile on Michigan Avenue.

It's a debate that has played out for months at City Hall, with neither side a clear winner. City Council members recently approved an ordinance that limits dispensaries to industrial and commercial zones and requires them to stay 1,000 feet from schools, churches and other marijuana businesses.

The 48 already recognized as operating in Lansing will have a year to relocate if they don't meet those rules.

"I'm sure the community, when they voted this in, didn't expect to see Amsterdam," said Van Every, referring to the Dutch city known for its tolerance of marijuana shops. "We're on board and working with City Council."

Ultimately, Michigan Avenue will look different when the council finalizes a cap on the number of dispensaries allowed within city limits.

Council members are set to discuss a proposed cap of 48 medical marijuana businesses within city limits on Monday. That number would prevent the 48 already in operation from having to close. Some likely still will have to move by next year.

Suggestions from residents include dividing the businesses evenly among the city's four wards. That sentiment results in part from the number on East Michigan Avenue.

Most people asked couldn't point to a particular reason for the cluster of marijuana shops that have sprung up there.

One explanation, they said, could be the corridor in recent years had seen a lot of vacant buildings and office space as companies either folded or moved elsewhere.

"That's where you're going to go," said Van Every, whose site is near the corner of Michigan and Magnolia avenues. "When you're first starting off, overhead is something you really have to consider, so if you can get a decent lease on a piece of property, then that's better for the business."

He invested about $5,000 to get started after he was inspired by a friend in Mount Pleasant. Under his business plan, patients and caregivers lease locker and display space. The dispensary profits from rental fees and a 20 percent service charge.

Marijuana is not grown, consumed or purchased there, Van Every said, and he installed multiple security systems.

"We're trimming the bushes. We don't have neon lights all over the place," he said. "Somebody is taking care of the property."

She initially wasn't supportive of medical marijuana. Her views changed, she said, after prescription medication she took to treat her multiple sclerosis left her feeling too sick to care for her young children.

Now she uses products that don't require smoking. She sells both forms.

Her dispensary is also a clinic. A primary care physician from Canton, whom PeÃ±a didn't name, is on site twice a week to evaluate potential medical marijuana patients.

"We have turned away people. It's a liability on his behalf," she said.

Rumors of license mills, however true, are a stain on those who practice compliance, she said: "It's just been an insult, almost like a mockery. We lose credibility."

While community supporters want to see more activity in local storefronts, some think the pot shops are hurting - not helping - the neighborhood.

"We have had an increase in larcenies and burglaries and that type of thing," she said.

"I get (a) steady stream of emails from small businesses on the avenue and from people living in the moderate-density neighborhoods half a block away who are concerned about what they're seeing," she said, adding that she has heard reports of marijuana being grown in the open and people loitering around medical marijuana businesses.

According to statistics compiled by Lansing police, the picture is not that clear.

From July 1, 2010 to June 30, 1,357 total incidents were tallied within 500 and 1,000 feet of 12 establishments on Michigan Avenue. That is up 2 percent from the 1,333 logged from July 1, 2009 to June 30, 2010. But the numbers likely are skewed because some incidents are counted more than once, since businesses located near one another overlap buffering zones.
The data also show:


Lansing police Capt. Ray Hall said dispensaries are analogous to liquor or party stores from a law enforcement perspective, and that "it's a reasonable assumption" that crime would increase when more people are attracted to an area.

But, he added, it's inaccurate to assume that dispensaries cause increased crime.

"Just because they're in near proximity doesn't mean that the establishment had anything to do with these crimes," Hall said, adding that numbers alone don't account for motive. "You have to look at each case on its own merits."

Medical marijuana users must be licensed by the state. As of June 28, 82,148 people were licensed to use marijuana in Michigan, according to the state Department of Licensing and Regulatory Affairs.

Of them, 7,190 are in Ingham, Eaton and Clinton counties, data show as of Tuesday. The largest share is in Ingham County, home to 4,916 patients. The department said figures are broken down by county or zip code, not by municipality.

It is unknown how many more potential cardholders are in the pipeline. A department spokeswoman said workers are more than two months behind in processing applications, and some applicants send multiple copies or documents.

Other community activists aren't convinced that marijuana is the root of an increase in crime in the area.

"We had a rash of burglaries, but I think that was unrelated to the medical marijuana thing," said Brian Baer, president of the Foster Neighborhood Association.

But, he admitted, many people are wary of the new marijuana businesses: "They're nervous and kind of concerned about it."

Many dispensary operators are skittish to talk on the record, but those who do say they carefully follow laws in order to stay out of trouble and keep their businesses clean.

"I obey every law. We do everything the right way," said Frank Lain, a business partner in The Popcorn Bag, 1824 E. Michigan Ave.

Opponents of the medical marijuana businesses assert that the cluster of pot shops also harms the east side's image and economic vitality.

The corridor has long been struggling to overcome an excess of empty storefronts.

While dispensaries have brought life to some of the shuttered storefronts, the concentration of them is off-putting to detractors.

"It's never a good thing for a nascent renaissance district to be identified for a single purpose," Nelson said. "What we're interested in is a lively and diverse area. We're looking for a few more restaurants, galleries, businesses that serve the people of the east side."

There have been signs of progress. Several eateries, such as the Soup Spoon Cafe and Lamai's Thai Kitchen, have drawn in visitors. Specialty shops such as Rae's Yarn Boutique and Lansing Art Glass also call the avenue home.

Scott Harris, owner of the Everybody Reads bookstore, said that he's noticed a bump in business since the pot shops moved in. He welcomes them openly and his store now carries a selection of books about marijuana cultivation.

The effect of the dispensaries on his business "is palpable," Harris said.

No evidence is yet available on the businesses' impact on either the state or local economy. Some state departments, including licensing and treasury, said they don't know of any such studies.

Informally, some dispensaries and non-marijuana businesses are finding ways to work together.

The Popcorn Bag, for example, promotes Everybody Reads to its customers, along with other businesses such as Gone Wired CafÃ© and the Soup Spoon.

"We're trying to create a synergy," Lain said. "If you want Lansing to be sustainable, shop on Michigan Avenue. Shop your neighborhood."

PeÃ±a said she nets enough to cover expenses. The shop takes in marijuana products at $8.90 per gram and distributes it at $12 per gram, she said. Profit estimates vary based on the month.

She's waiting to learn what will happen to her business.

"The clustering shouldn't have happened," PeÃ±a said, adding that City Council waited too long to enact a moratorium. "It's something that will gradually evolve."

Down the street, the Compassionate Apothecary occupies a house that had last been used as an insurance agency, but has been empty for an unknown amount of time.

Van Every said businesses like his are as important as any other in terms of economic impact. An average month can yield about $65,000, of which the dispensary keeps a share.

Including himself, Van Every employs four full-time and two part-time workers. The going rate is $10 per hour. His business pays taxes.

Van Every said he understands the need for an ordinance. But he doesn't want to move away from Michigan Avenue.

He knows it's probable, given the fact that a church is within 1,000 feet.

As soon as details on how to apply for a license are available, he said, "we will be out looking for property."

Medical marijuana patients apply for cards through the Michigan Department of Licensing and Regulatory Affairs. They have to submit names, addresses and other identifying information for themselves, their caregivers and the physicians who authorized their applications. The fee to apply for or renew cards is $100.

The law, approved by voters in 2008, does not address dispensaries. As such, the state can't advise patients on how to become growers or obtain the drug, said Rae Ramsdell, acting director of the department's Bureau of Health Professions.

Ramsdell said she has heard of businesses requiring patients to possess a medical marijuana card or documentation showing they have been approved.

"Technically, I don't know what the requirements are" for individual dispensaries, she said, adding that the state's main role is issuing patient cards. "That's all we can do."

Â» Patients must be diagnosed with a "debilitating" illness, such as cancer, glaucoma, HIV or AIDS, or have an illness that leads to such symptoms as severe or chronic pain and nausea, among others.

Â» Caregivers have to be licensed and at least 21 years old. Patients can be younger than 18, but a parent or guardian must be their caregiver.

Â» Because the federal government considers marijuana an illegal substance, it can't be obtained through a traditional pharmacy.

Â» Caregivers are allowed to grow up to 12 plants for each of five patients. 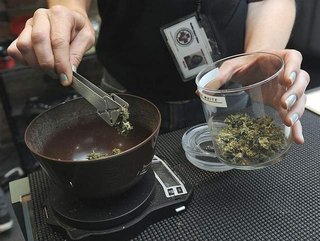