That said, 13l pots is a good choice for 9 plants in your tent.
Click to expand...

Cheers for the confirmation thought I'd check with you, you definitely have that knowledge bubs buddy was talking about, learnt so much already, cheers heaps

RoyC said:
Cool I can't get nematodes here I don't think and most overseas companies don't seem to ship here but I'll keep trying, might find a drench or something.
So do I wait to see the top of the coco dry just abit before I feed next because 4 were had just a little dry on top and the rest still heavy as, do i top the 4 slightly dry top ones up and water next night or just water them all anyway
Click to expand...

One thing I found to be fairly effective for fungus gnats is diatomaceous earth. I mix it with a little soil and perlite and make a thin layer over my soil. It scratches the insect's waxy coating and causes dehydration, both those laying eggs and those they are just changed to adults from pupae. It takes a few weeks to break their reproduction cycle, but it's something I really wish I'd known about back when I grew mushrooms (edible, not the fun kind).
I have friends who are bi-poly-pagans, and others that don't know what that means.
R

Hi all was wondering if it's good to run light 24 7 in veg instead of 18 6, the person that taught me said they get enough sleep in flower lol

Keeping your plants in 24/7 light increases you DLI (Daily light integral), which is a way of effectively increasing your PPFD (Photosynthetic Photon Flux Density - aka effective light intensity) by allowing them to get more light per day. I tend to give two hours of darkness in veg, keeping my lights on 22 hours. I can't run at the same PPFD as would be experienced by daylight, so this helps make up for it. This is mentioned as acceptable by Read Spear, long time professional grower and respected author on the subject.

Needless to say, dropping back to 12/12 in flowering is critical to maintaining flowering in non-autoflower plants. I haven't the slightest on what AF do in 24/7.
I have friends who are bi-poly-pagans, and others that don't know what that means.
R

Hi all trying the quad linings method didn't quite turn out like his but first go, just in 2nd week flower and done the last lollipop was wondering if I went overboard with the trimming still experimenting with it, I just tryed to get the tops light from leaves and got rid of anything that was low and probably wouldn't get light, I went a little extra on a couple just to see, didn't take a b4 photo tho thought about it afterwards lol but they were bushy as, filled up about half a 20ltr bucket with what I cut off and had been constantly trimming through veg to keep what I wanted in the light, any advice good or bad be great thanks, also what week is end of stretch on a 8 week for example? 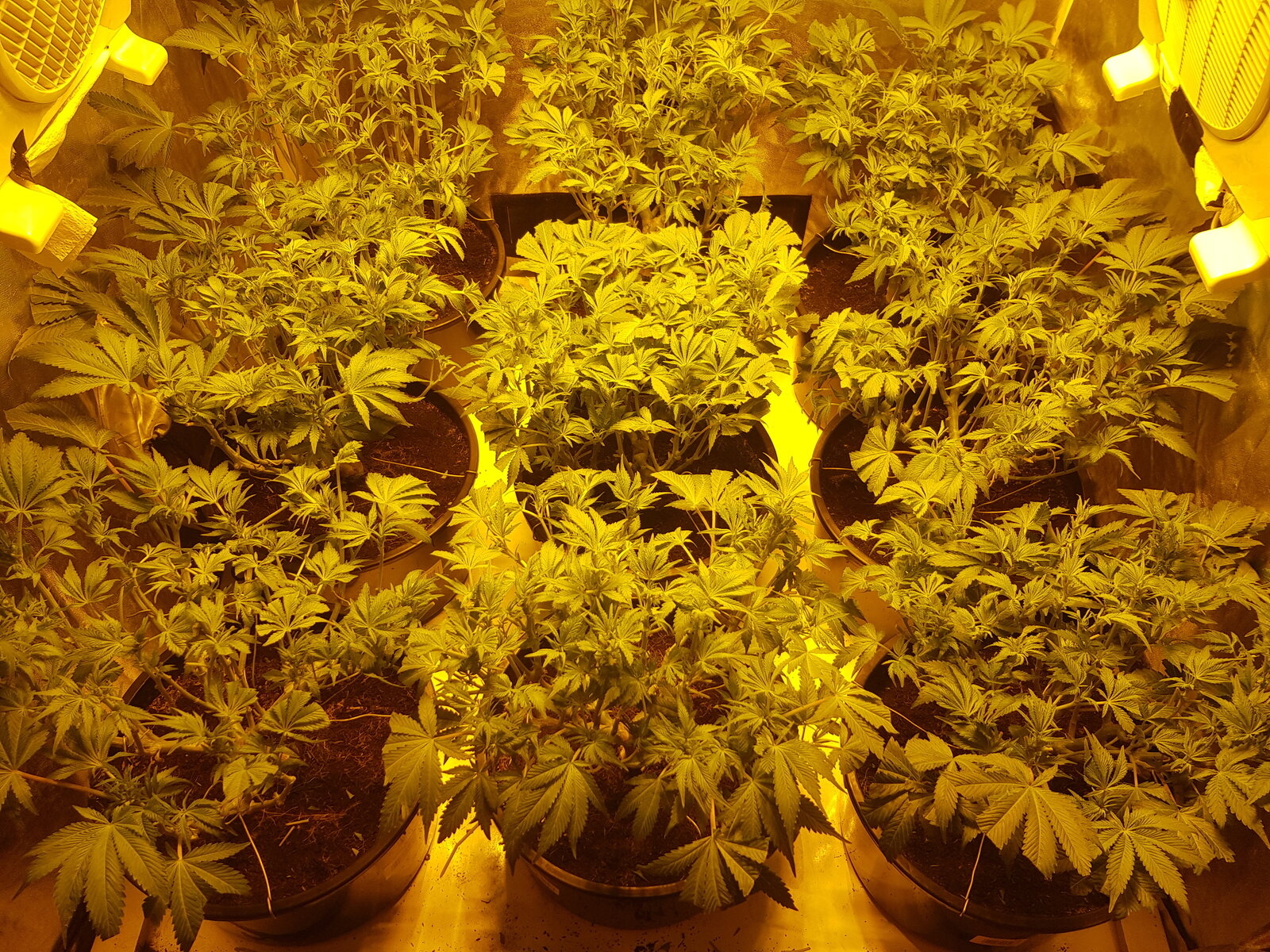 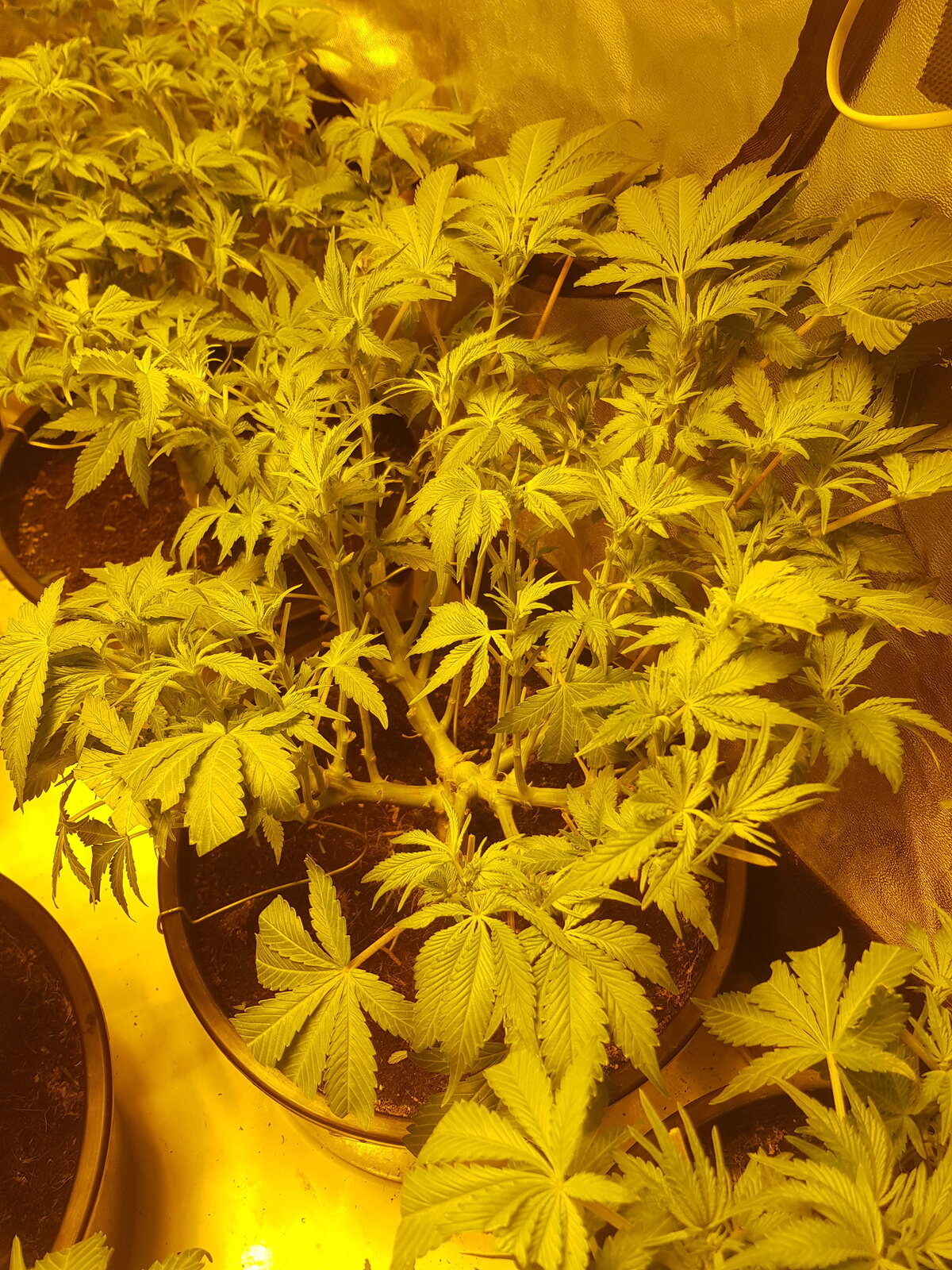 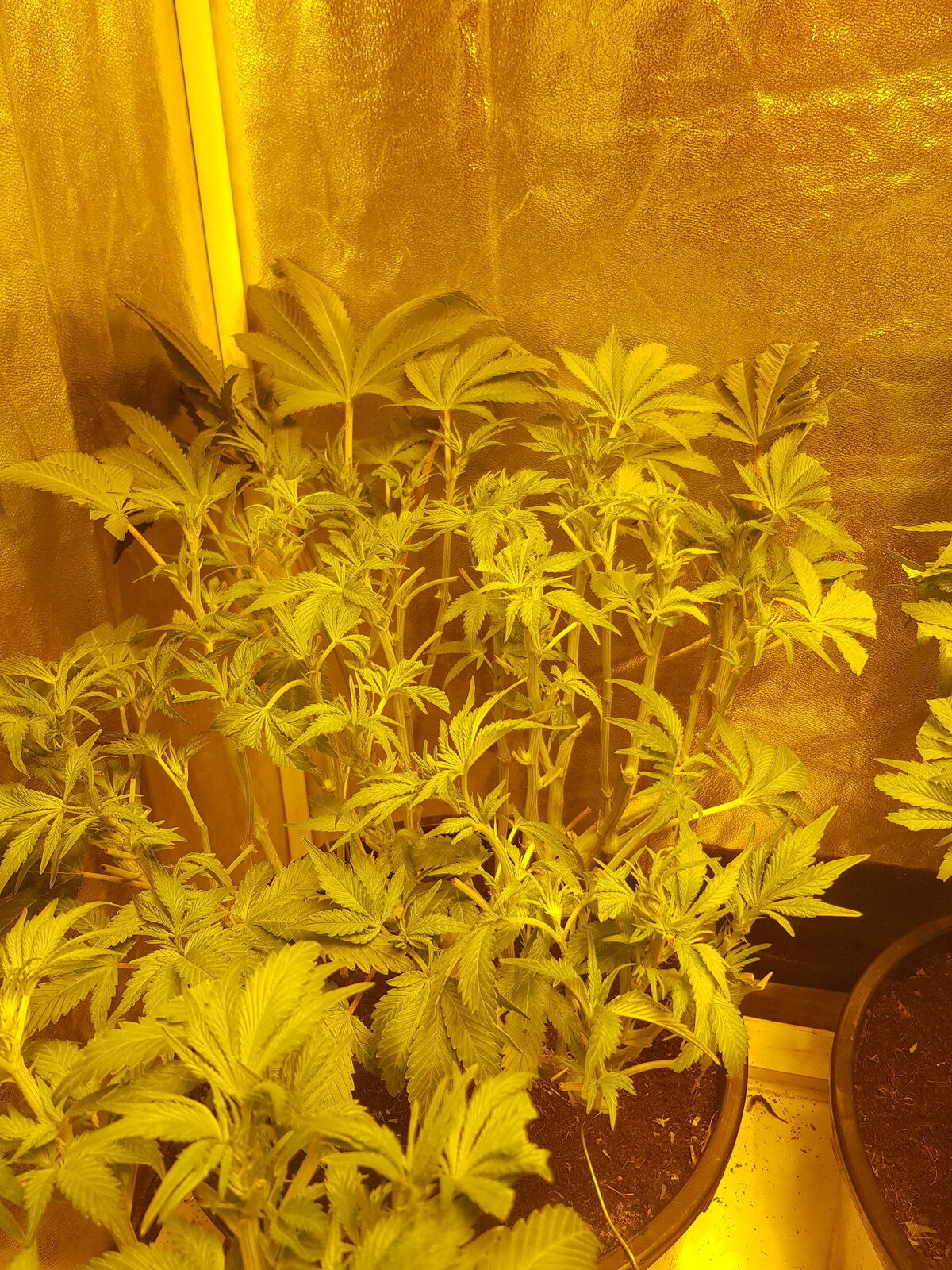 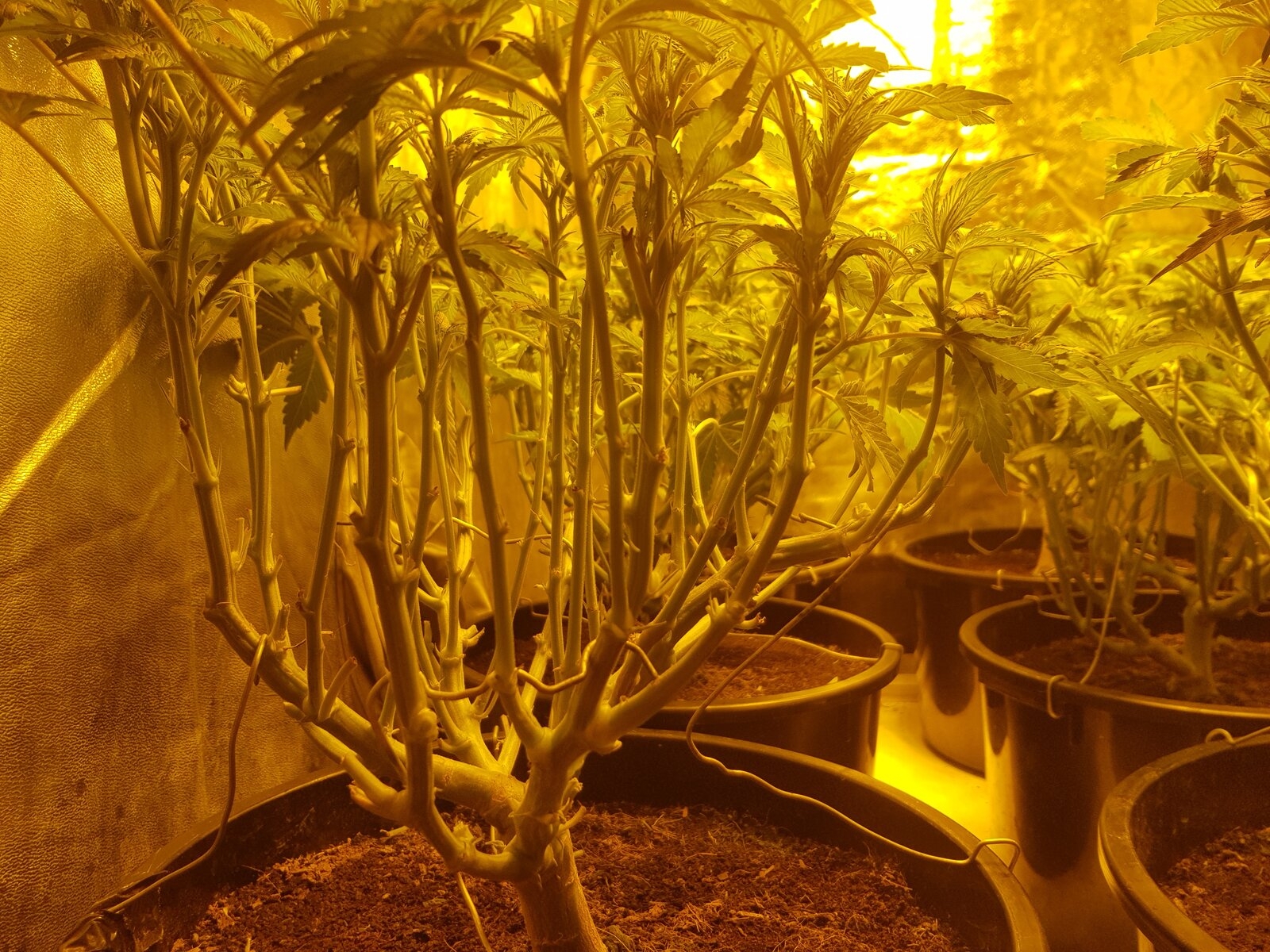 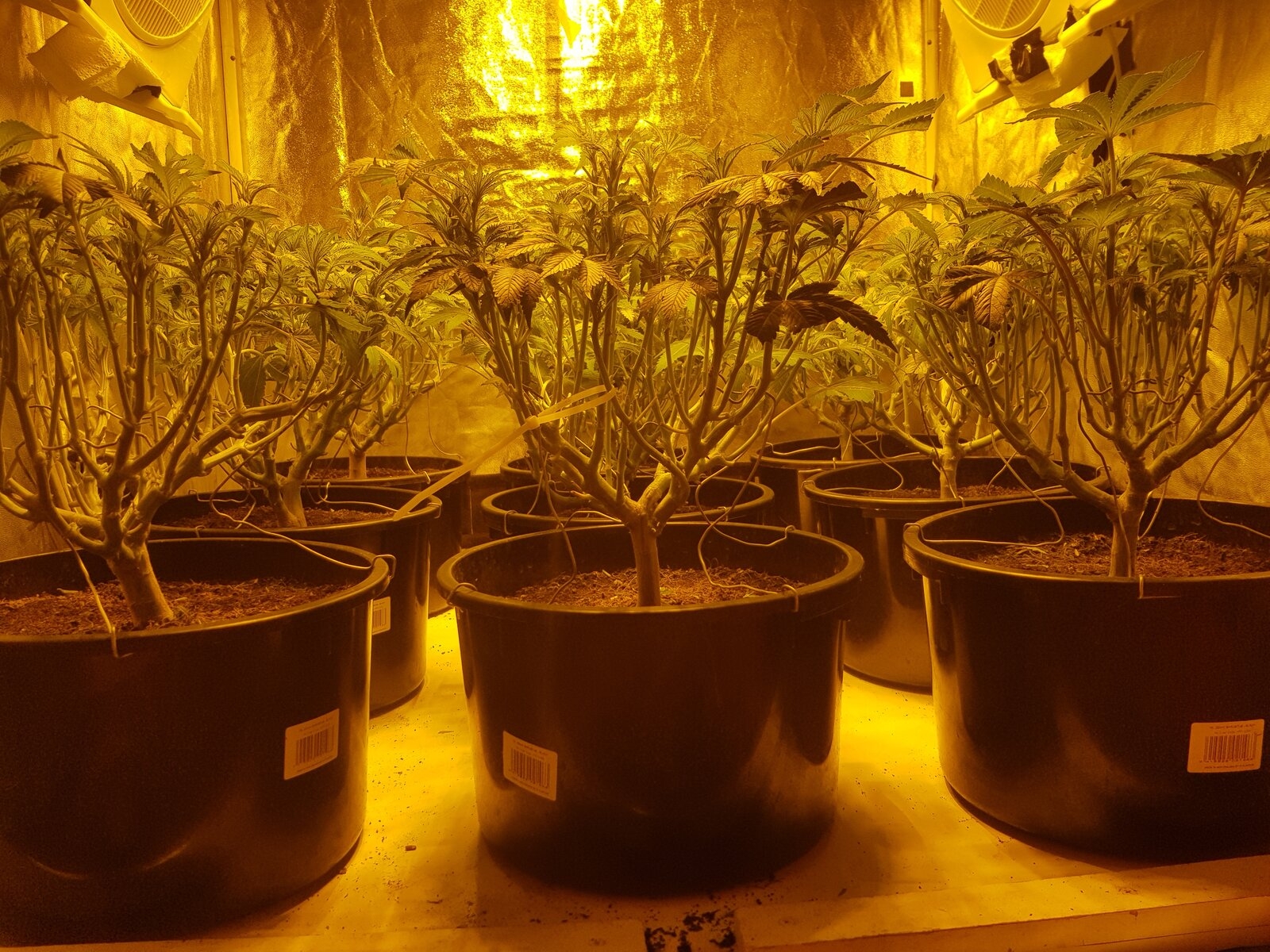 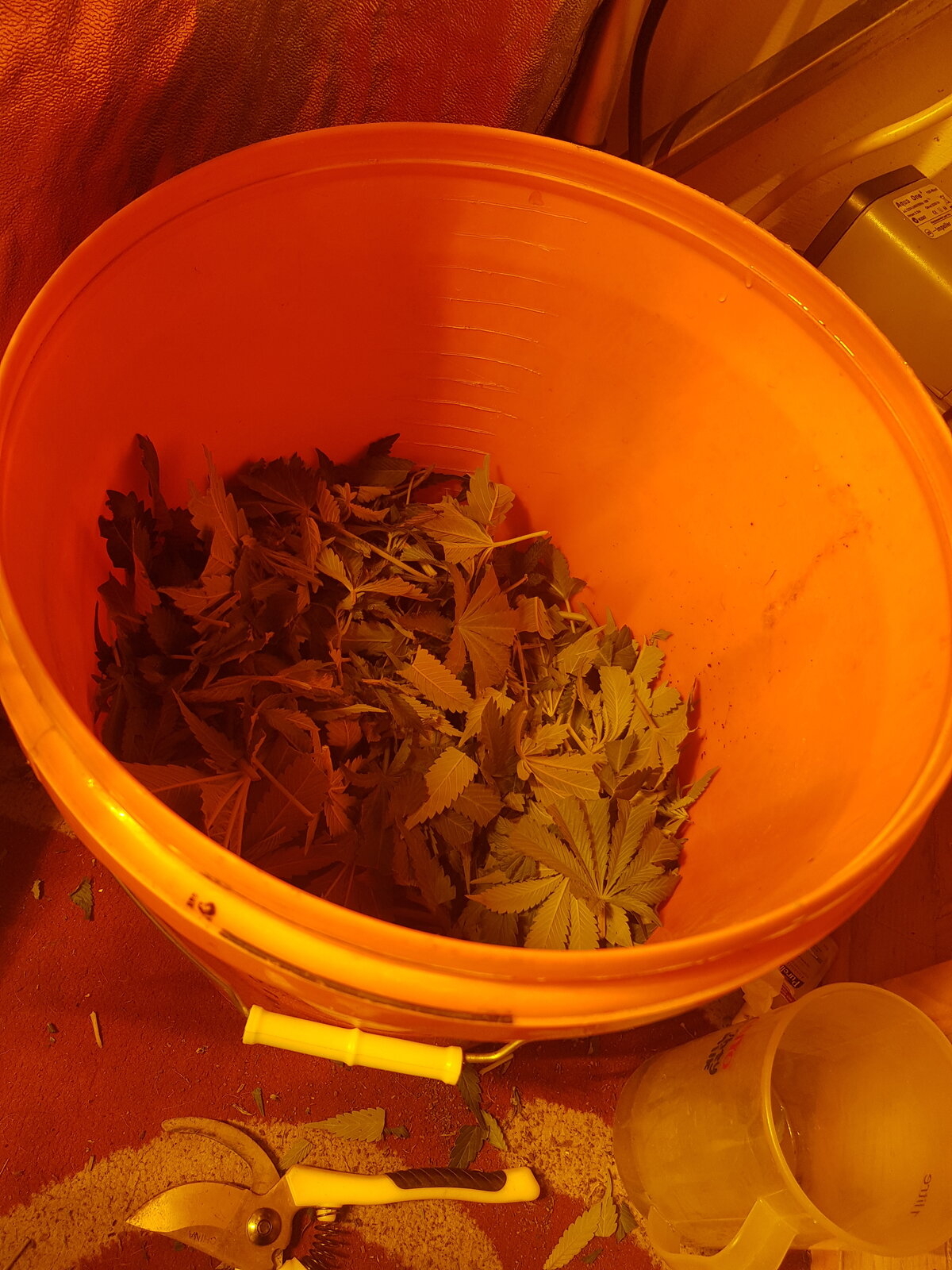 Nice crop, Roy. Where do you get your pots?

Btw, might want to turn off your lights when taking pics and use the flash - get a more natural color in the pics that way.
I have friends who are bi-poly-pagans, and others that don't know what that means.
R

Hi everyone, I've been trying to research about cutting leaf in flower stage but still not sure how much I can if any, they are abit over crowded, my fault, I've been taking leaf of that has been covering other potential mains through out whole grow till 2 week into flower but I'm jst a bit cautious in flower, I've heard it can make the plant grow more leaf and makes leafy buds? I'm in week 5 now, I think these one have long flower phase, would like to get abit light to the slightly lower mains and get abit of air in the middle, any thoughts or links would be very much appreciated, cheers
Thet got little bit more crowded since these pics, sorry forgot to turn light off and use flash 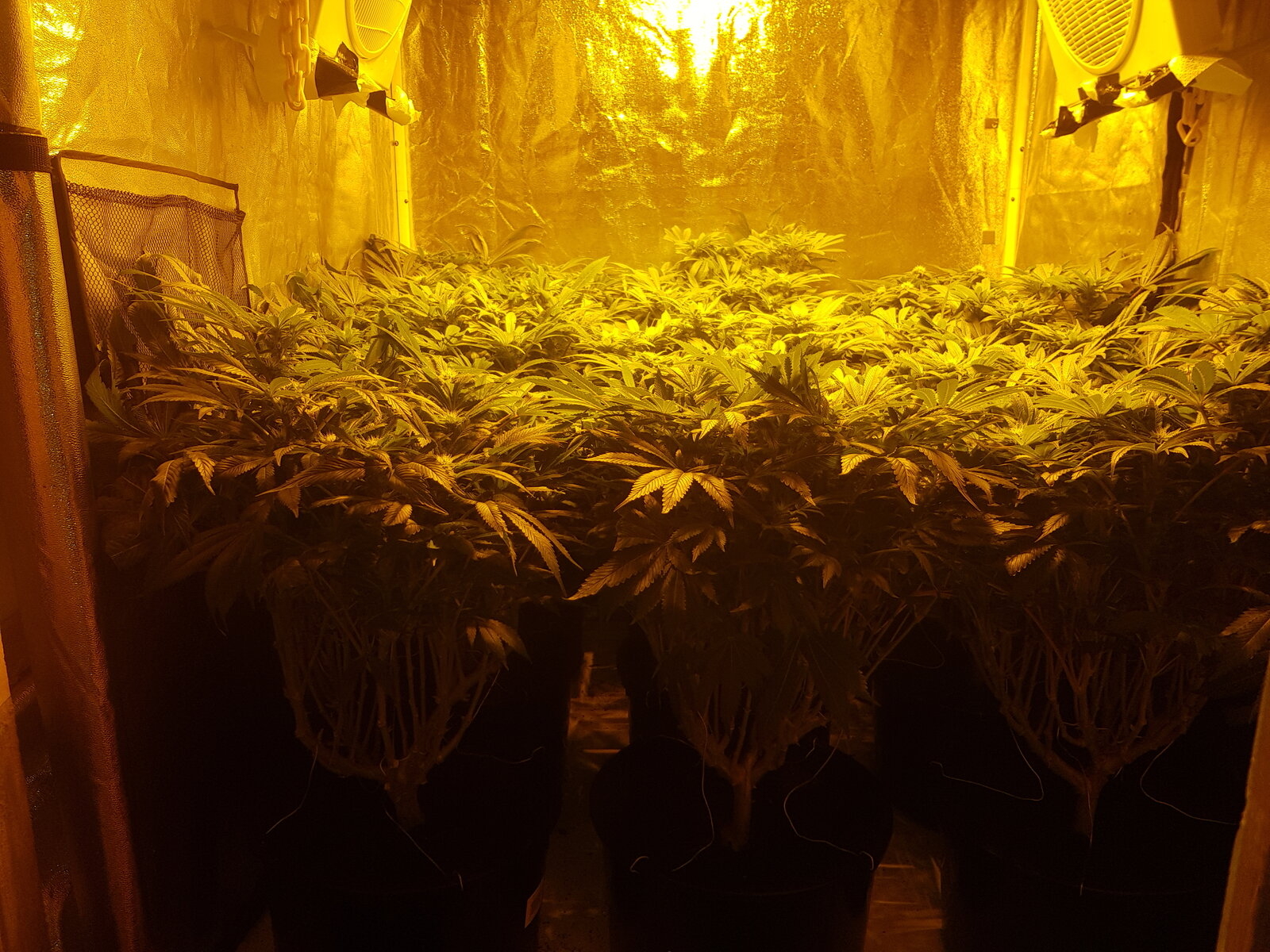 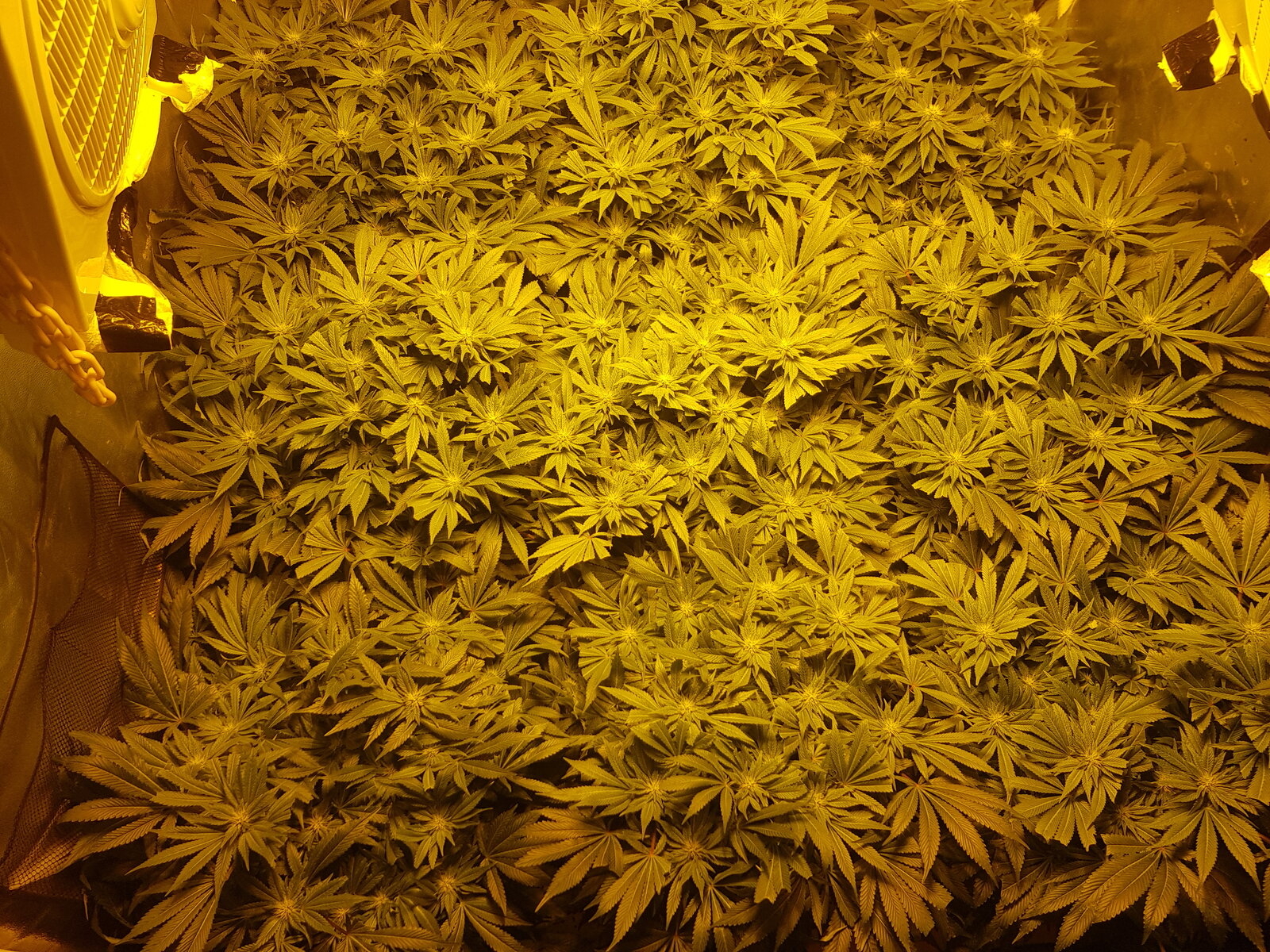 You may have all ready rectified however on the rust issue,have you got franjipanis on your property or neighbours because I have a franjipanis nursery and I have just had a dose of rust , franjipanis are rebound for rust as desease,I reckon it could very easily transfered to your room Just throwing my 2 Bob in

RoyC said:
I posted this in introduce myself but thort I'd post here to, im not sure on strain hybrid of some sort, have 12 in coco, 1.2x1.2x2m tent, 1000w air cooled hood, 24 °C at the mo, use house and garden to there chart, 1 week into flower, runoff ph normal, the problem happened last grow when i had thrip infestation witch took me awhile to sort out, got rid off them but the left abit of damage and had a few scale bugs to, after that the leaves started turning yellow then brown then dying, thort it was just because they were quite damaged but it seemed to spread, then I noticed the next babies in now started yellowing and dying especially if the leaf damage or had a little rip in it now it's just speading rapidly, yellowing from tip of leaf in to stem and others from stem of leaf to tip, curling leaves and weird growth, there are no visible pests, I tryed peroxide 3% spray over foliage i think left the yellow patches red like rust, have now used fungus and bacteria spray and have been constantly removing any yellowing leaf, still early days for fungus spray but I think it still speading, I've noticed outside around our house there seems to be similar damage on certain plants and weeds and the local plant nursery said he had rust, I can't seem to figure this one out, it's just weird its carried on to the next lot and haven't changed medium or nutrient, clones are from the same 3 or 4 different mothers which make me think its disease from thrips, is it a type of rust, bacteria, fungus, tiny bug I can't see or deficiency, thanks for any help ya have, here's some photos but because I keep removing lots of leaf can't really see the different yellowing characteristics which is confusing deficiency diagnosis 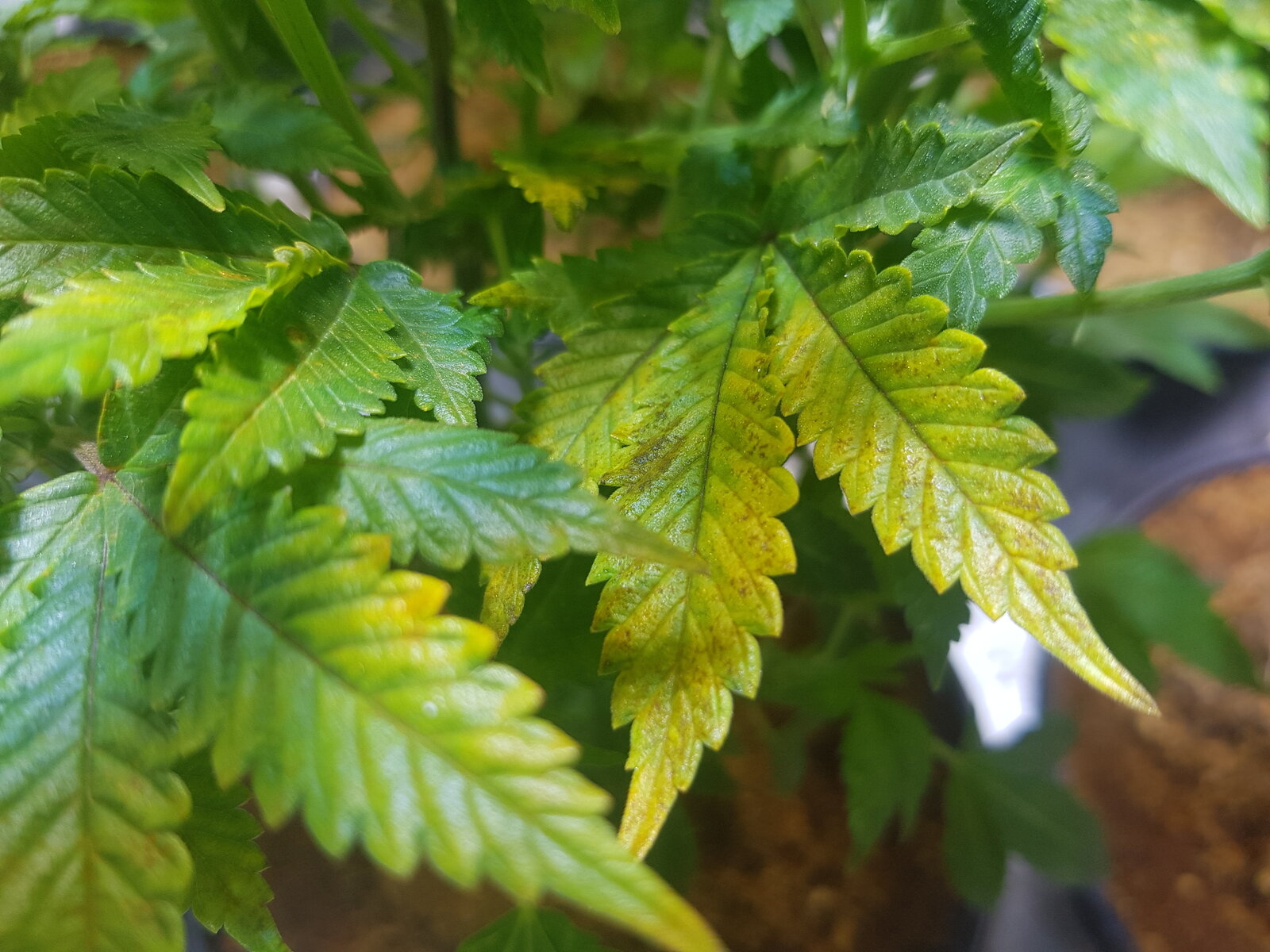 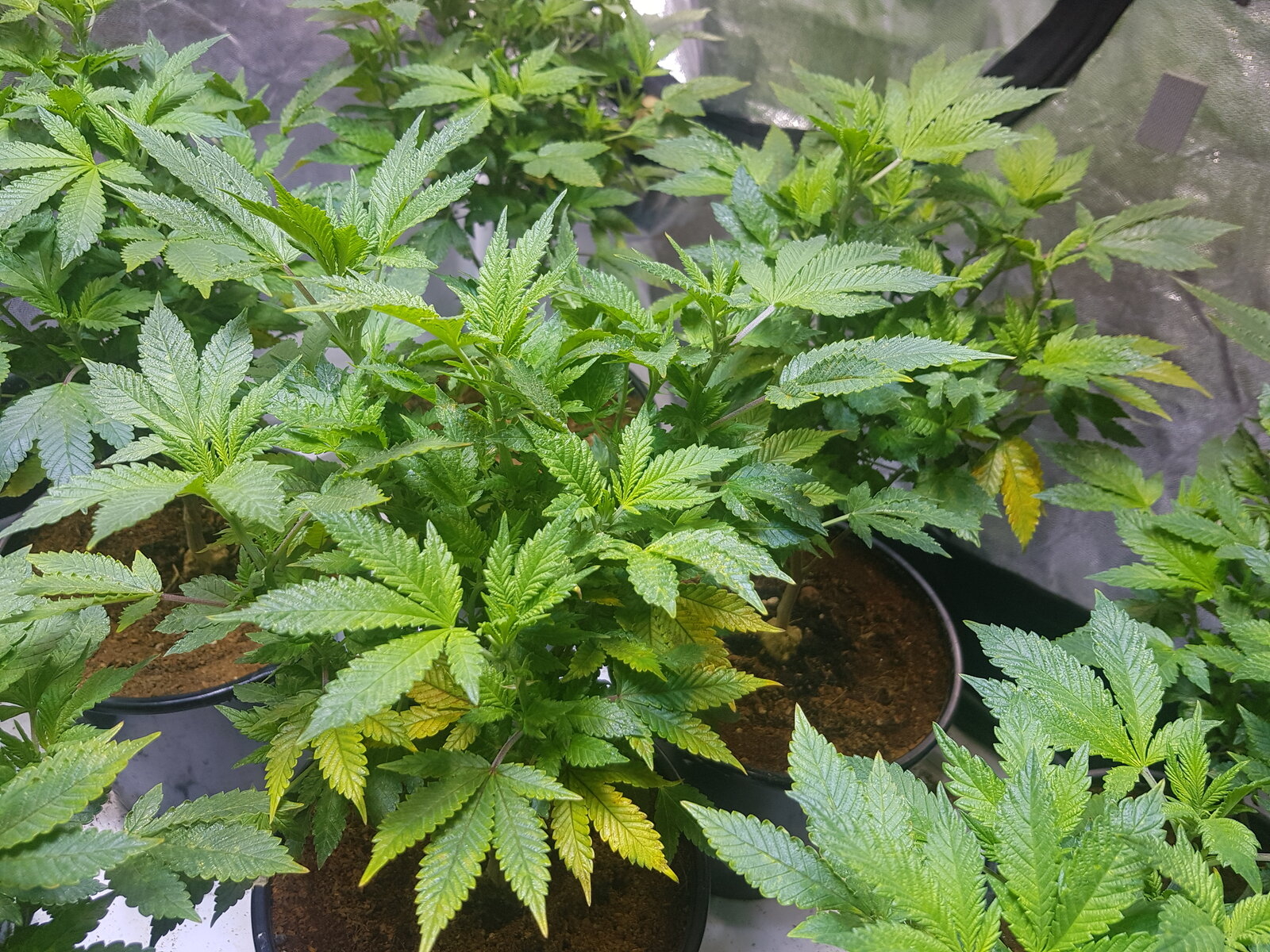 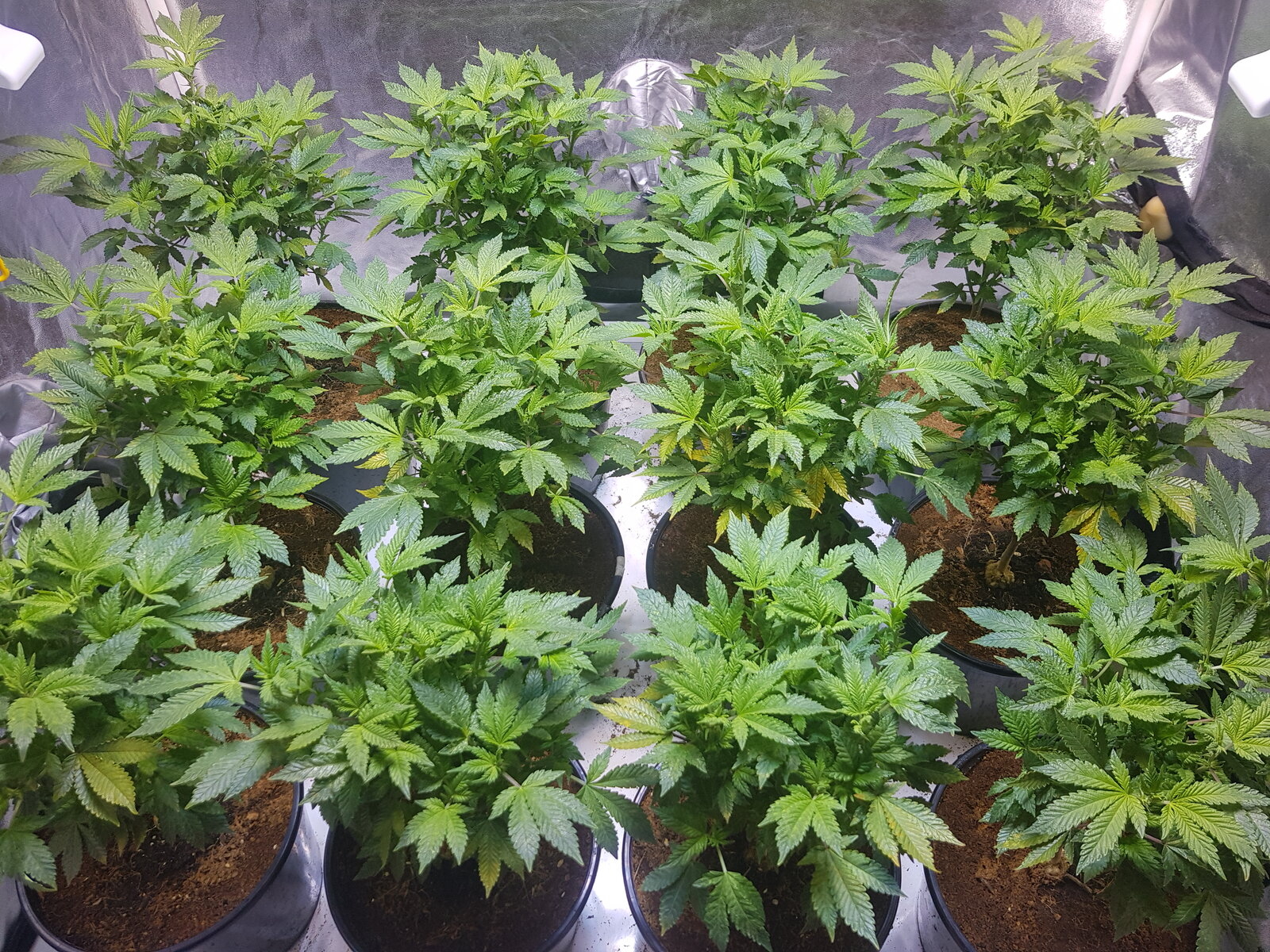 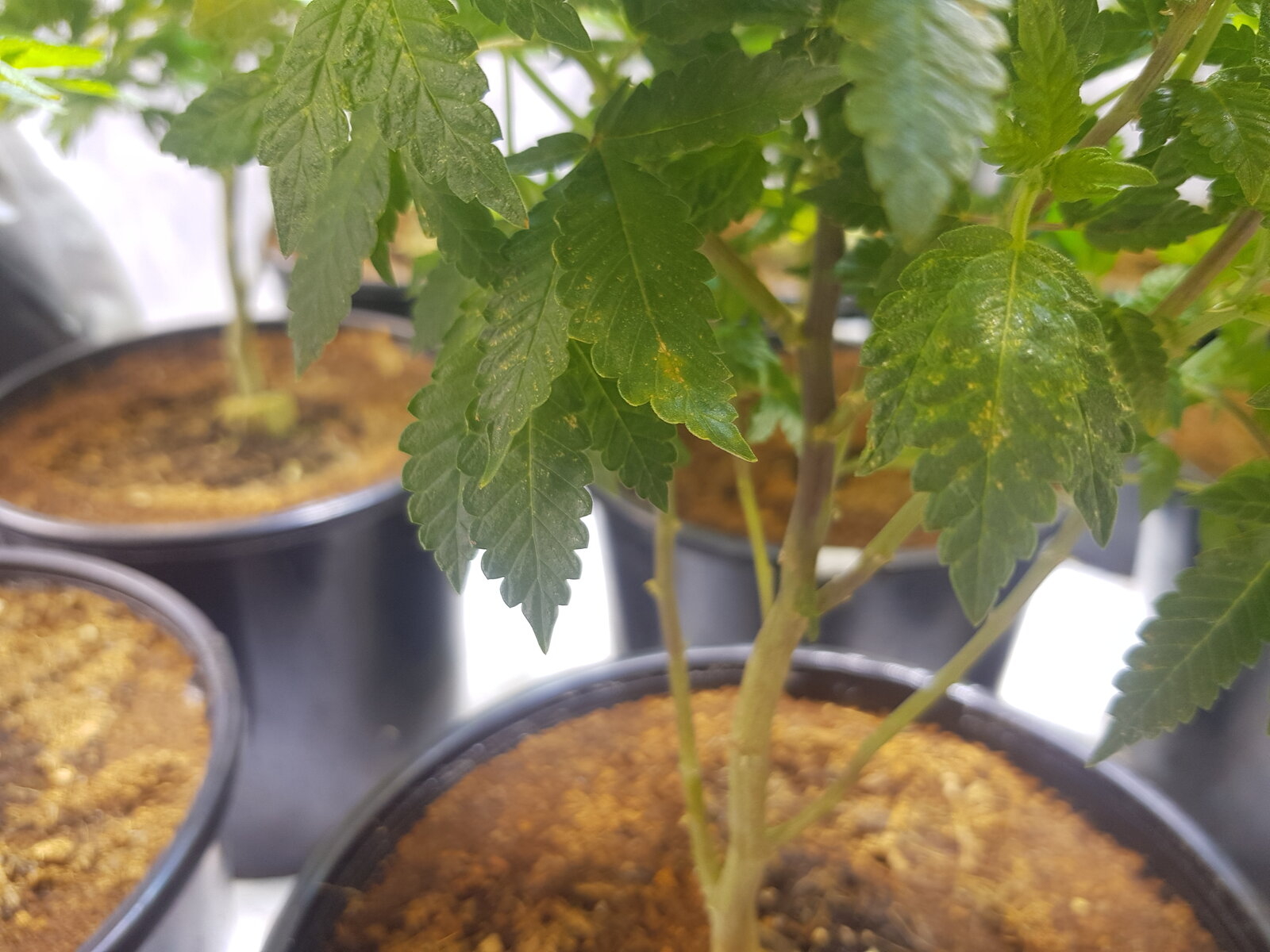 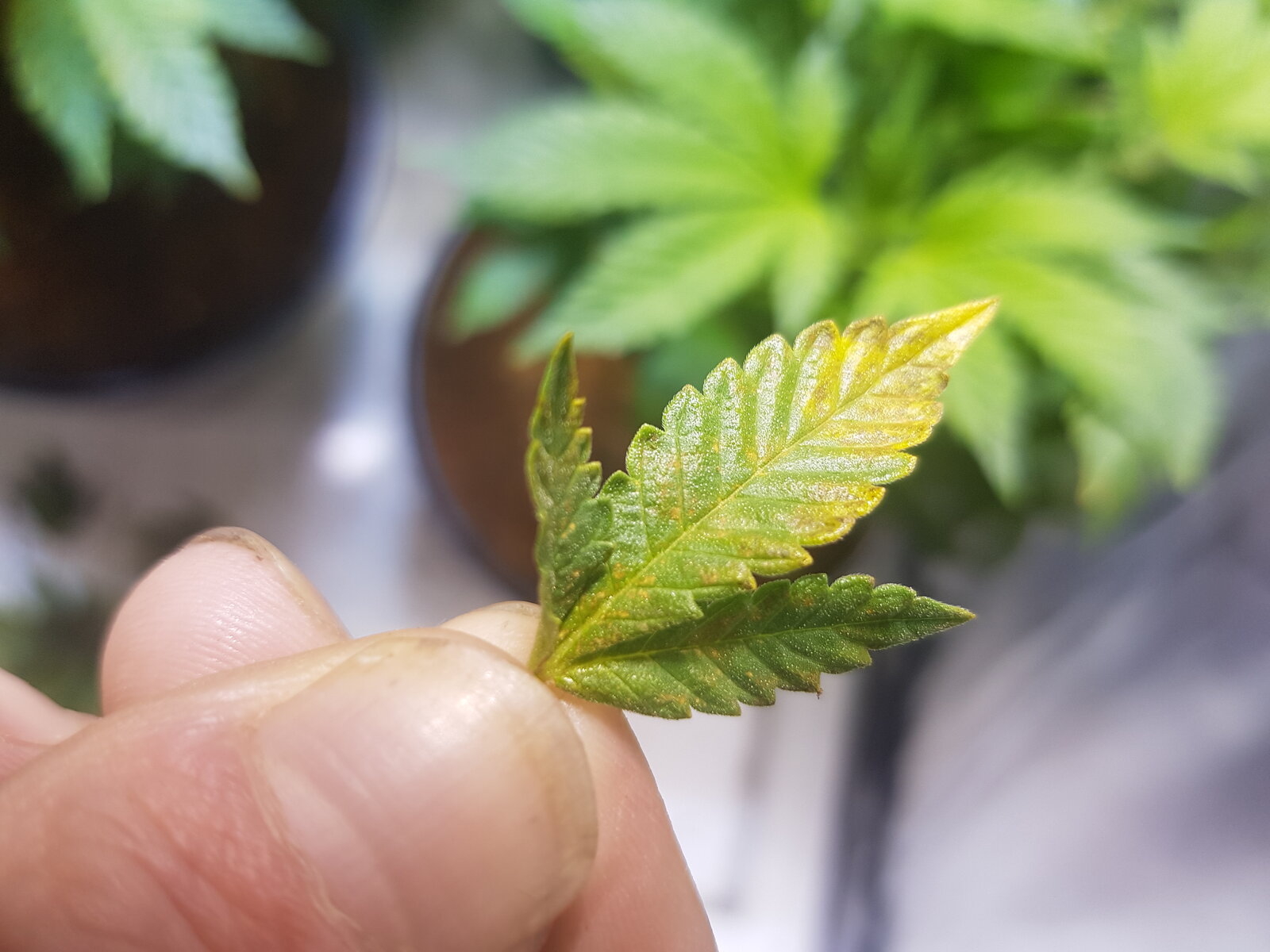 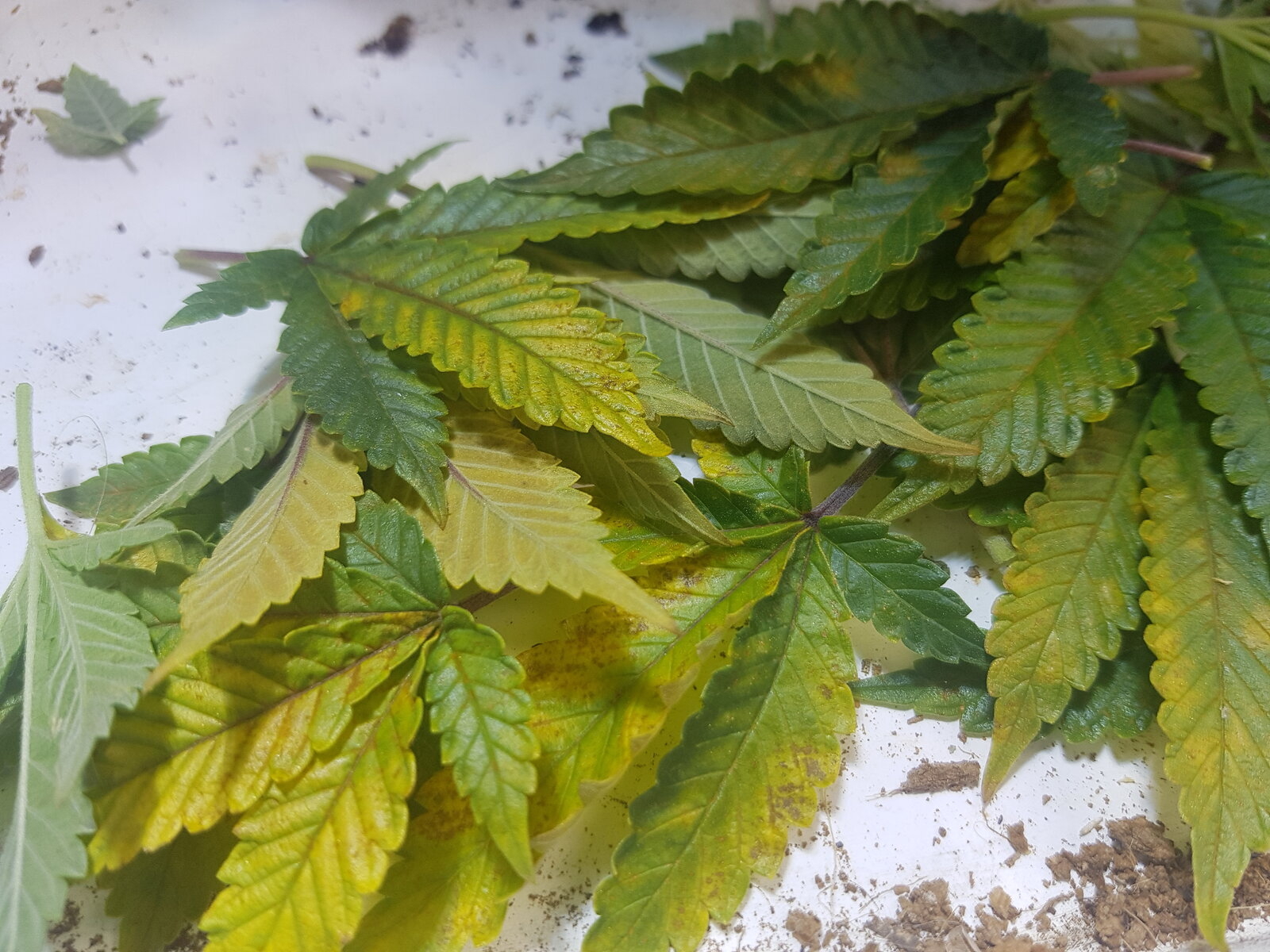 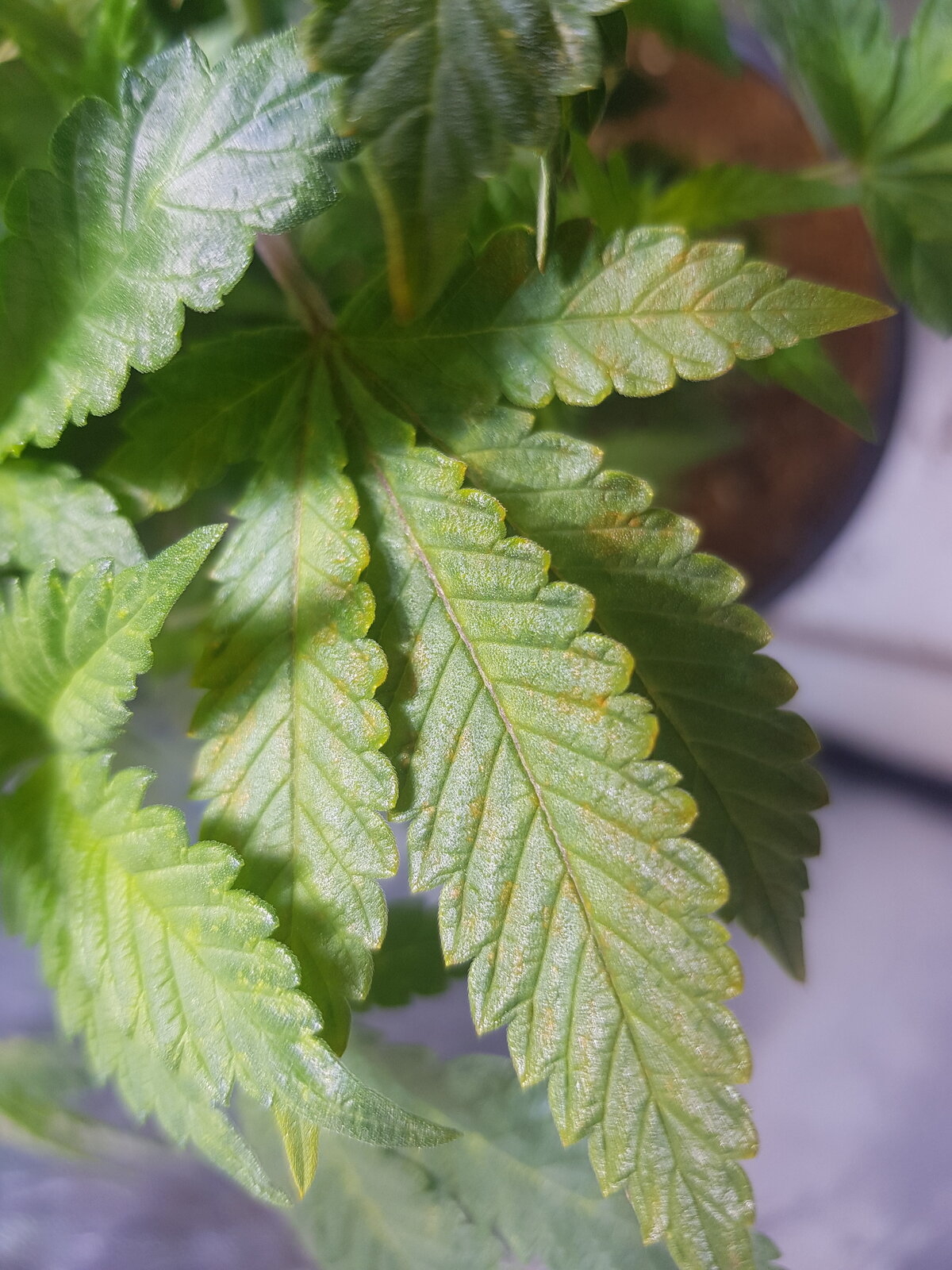 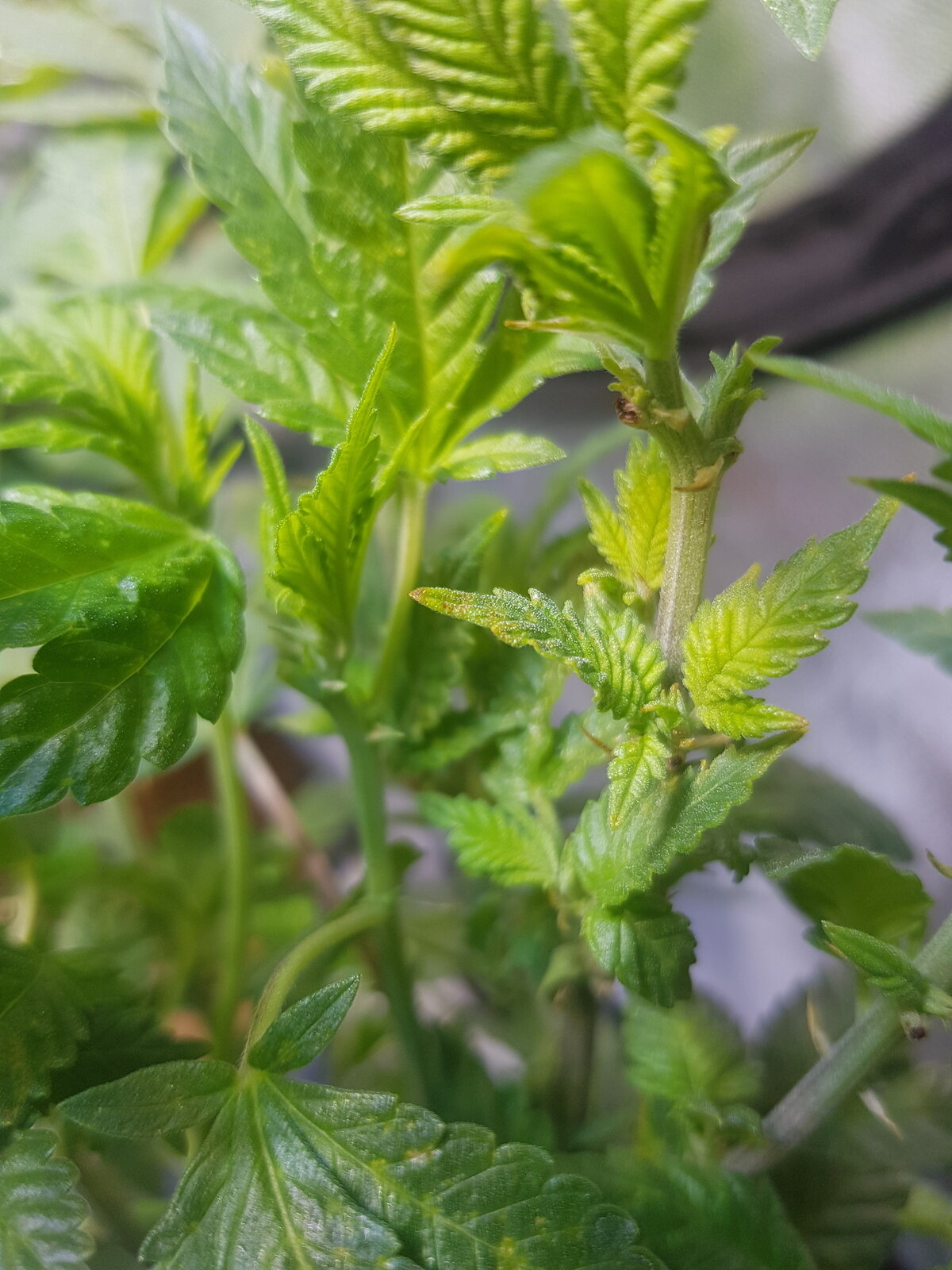 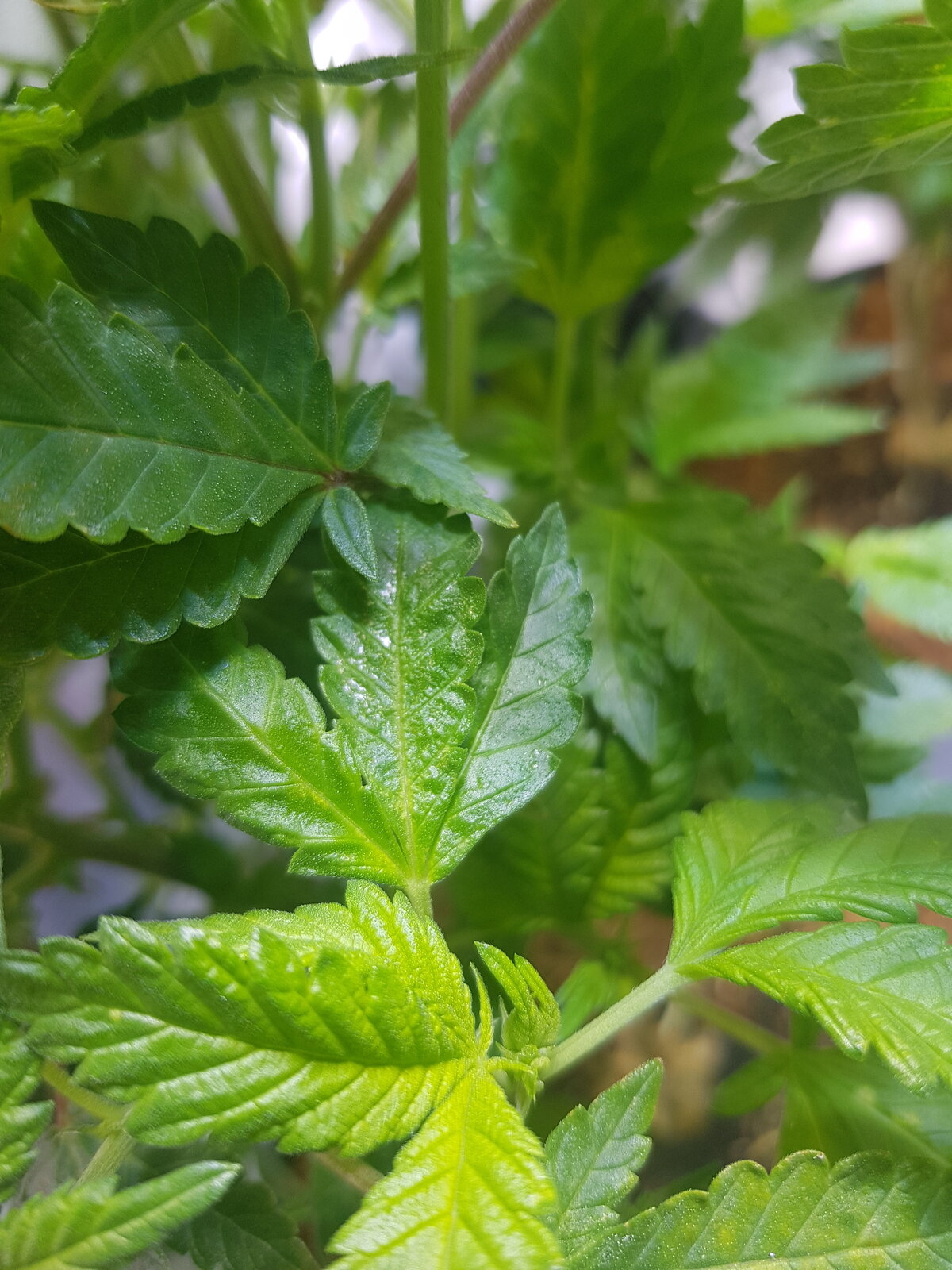 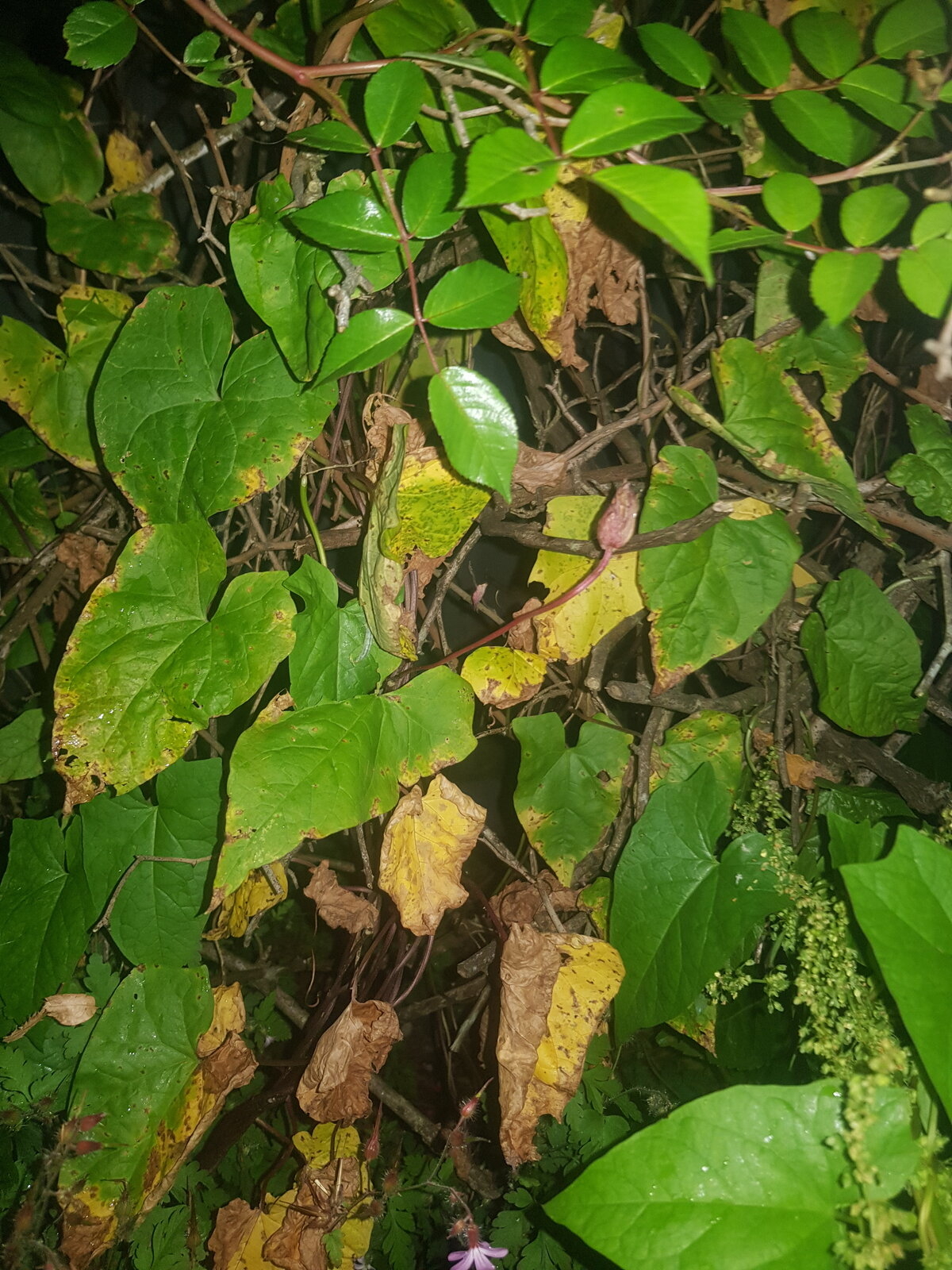 "Peace Out"
DOWN UNDER

Ossi Ossi said:
You may have all ready rectified however on the rust issue,have you got franjipanis on your property or neighbours because I have a franjipanis nursery and I have just had a dose of rust , franjipanis are rebound for rust as desease,I reckon it could very easily transfered to your room Just throwing my 2 Bob in
Click to expand...

Hi thanks, don't think we have those around here but not 100% sure, i still see it at times on the plant but it doesn't seem to stay for long, maybe the plants healthy enough to fight it, things got alot better at the mo, do you know much about cutting leaf in flower to allow light in and air movement?
R

Hi all does anyone know why this is happening? 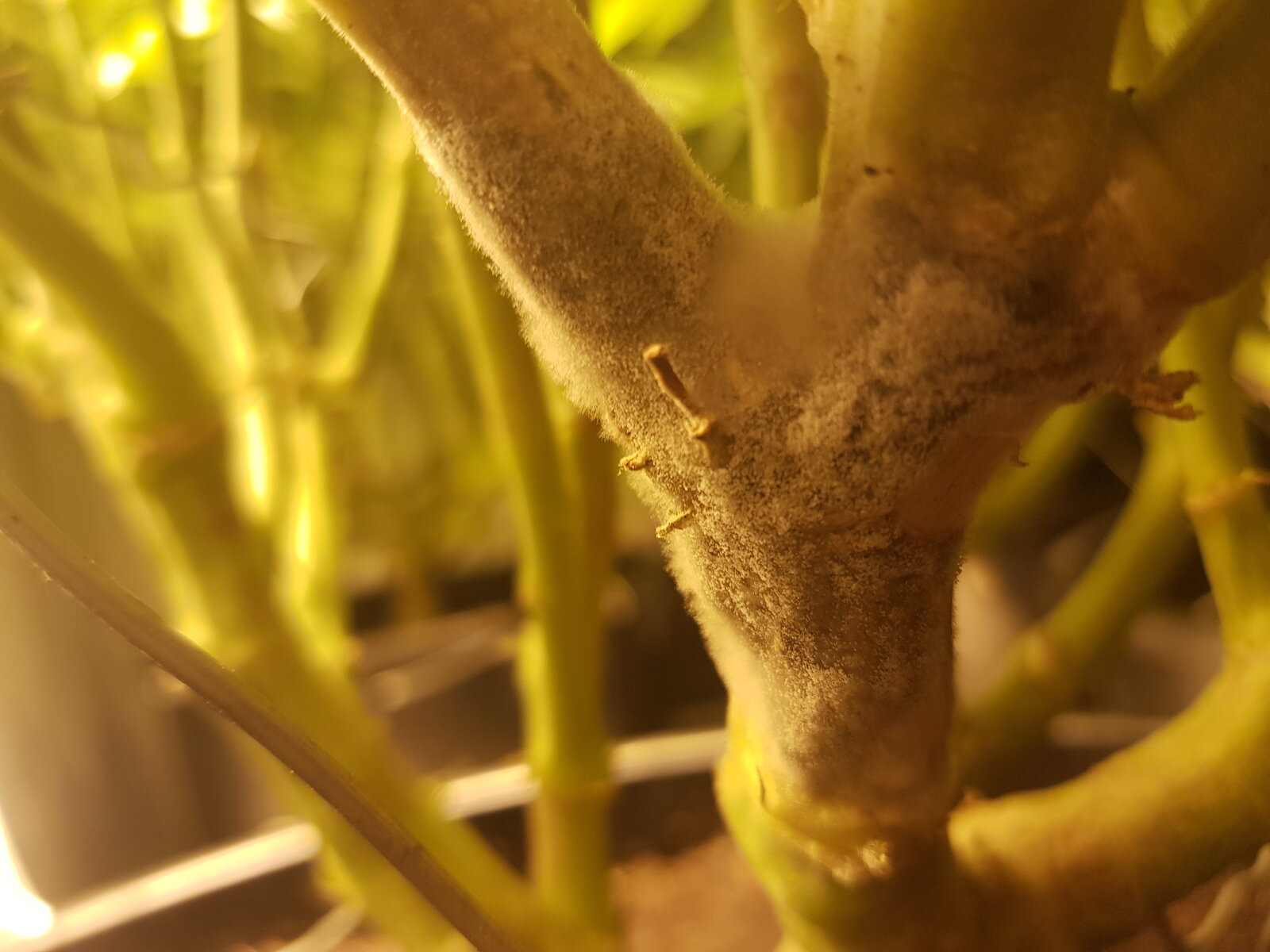 Old Salt said:
Have you added anything to the coco, other than an inert substance like perlite, or vermiculite? If not, you are running a drain-to-waste hydroponic system. You need to water about once per day during early veg, and that will increase to three or more times per day by the middle of flowering. The coco should never dry out with this system. In late flower my plants in 11l (3.8 gallon) grow bags are drinking about 1 liter or quart, three time per day. This gives me about 10% run off.

Hi again I was thinking about adding f worm casting to my next grow, if I do can I still use my coco nutrient A&B?
Should I still run off 10%?
What mix ratio should i use?
R

RoyC said:
Hi again I was thinking about adding f worm casting to my next grow, if I do can I still use my coco nutrient A&B?
Should I still run off 10%?
What mix ratio should i use?
Click to expand...

Potassium deficiency? Or heat stress? Or soil pH too high?
2 3 4