When attorney Gavin Kogan first got into the medical cannabis business, he thought it was pseudoscience, deployed by recreational users as a phony emotional appeal. He converted after talking to dozens of medical users, many of whom apply topical creams — never even consuming marijuana, much less smoking it. "When you talk about medical use, [opponents] have no problem," Kogan says. "Their concern is tattooed, dreadlocked teenagers gathering around medical marijuana dispensaries. They don't have a good handle on the facts."

He plans to start poking holes in that perception Sept. 23, when Del Rey Oaks City Council holds a workshop on medical pot. Kogan represents a client who wants to open a dispensary and tiny DRO might be the most inviting city around. Kogan's was just one of three inquiries DRO City Manager Daniel Dawson received recently. "People are interested in this," Dawson says. "We need to decide what we're going to do about it."

Kogan and attorney Richard Rosen will both attend the workshop on behalf of clients aiming to open dispensaries in the Monterey Bay area. Rosen represents Robert Blodgett, owner of the Monarch Cove Inn in Capitola. Kogan's client, Valentia Piccinini, is a Pebble Beach resident who uses medical cannabis to alleviate symptoms of multiple sclerosis.

"We want to work with the city to make this happen," Rosen says. "They're approaching this with an open mind, as opposed to the police approach from most of the other cities." Blodgett may propose a dispensary in a squat brown building off Canyon Del Rey. DRO officials are also considering opening a police substation in the building, located across the street from Safeway — the biggest source of police calls in town. Mayor Jerry Edelen says he's open to medical marijuana dispensaries, so long as they're tightly regulated. "We have an ordinance that does not allow a person to drink alcohol in public. I'd like to see the same with medical marijuana," he says.

Edelen hopes pot revenue could help stabilize a teetering city budget. California law requires dispensaries to be nonprofits, but Del Rey Oaks could impose its own tax on their sales. "Somebody is going to have one in Monterey County sooner or later," Dawson says. "It may as well be us." In Kogan's view, the industry is coming, and DRO might as well seize the opportunity to cash in where neighboring cities have been squeamish. "My sense is if DRO does this, within 12 months the rest of the cities would start to follow," he says. 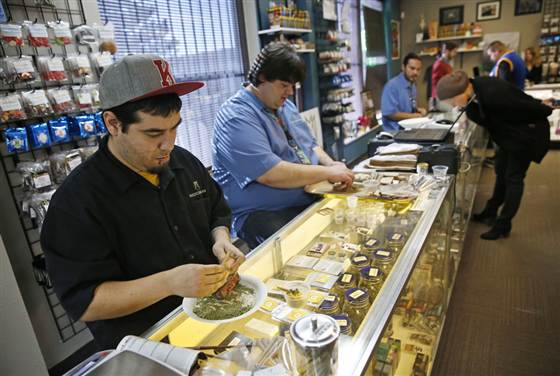