It's bad enough that someone charged with simple possession of marijuana in Delaware faces more than a $1,100 in fines and court costs; the possibility of probation; and the stain of a criminal conviction on their record, attorney Thomas D. Donovan says. They shouldn't have to pay for a lawyer, too, he says. That's why he is offering to represent them for free, and encouraging other attorneys to do the same.

"It's something sort of natural for me to go ahead and offer this kind of representation, to help end a costly, failing and racially biased policy," said Donovan, whose Dover-based practice focuses on the defense of indigent and low-income clients. "I feel a duty to stand up for people who are being penalized for this." Donovan, 41, points to a study last year by the American Civil Liberties Union, which found Delaware had among the highest per-capita expenditures nationwide for the enforcement of marijuana-possession laws in 2010. Its arrest rate rose by 102 percent over nine years, according to federal data.

The study found that — nationally and in Delaware — blacks are three times more likely than whites to be arrested for marijuana possession. In Delaware, blacks represented 48 percent of all marijuana possession arrests in 2010, although they make up just 22 percent of the state population. "It seems to be a problem not only here in Delaware but all across the country," Donovan said. "That says to me, let's have an open and honest dialogue about this."

Under current Delaware law, possession of even small amounts of marijuana is prosecuted as a misdemeanor, punishable by fines of up to $1,150 and up to six months in jail; however, sentencing guidelines do not call for imprisonment. Jason Miller, spokesman for the Attorney General's Office, noted that Delaware courts generally do not sentence those convicted of simple possession of marijuana to prison. "Instead, those individuals are generally entered into Delaware's drug diversion treatment program," Miller said.

In 2013, law enforcement made 2,632 arrests for petty marijuana possession, charged as an unclassified misdemeanor, including 298 charges involving juveniles, according to an analysis performed by the Criminal Justice Council's Statistical Analysis Center. Nine of those charges resulted in jail sentences; 102 charges resulted in probation. Nineteen states, including Maryland, have decriminalized possession of small amounts of marijuana. Critics of the movement say marijuana is far from harmless, and can be a "gateway" to hard drug use.

Delaware State Police opposed a bill introduced in the General Assembly this year to decriminalize possession of small amounts of marijuana for personal use. The legislation, as amended, would have replaced criminal penalties with $250 civil fines for anyone 21 and older found with an ounce or less of marijuana. Rep. Helene Keeley, the Wilmington Democrat who sponsored the bill, has said criminal charges for marijuana possession can prevent people them from getting a job. Buying and selling the drug would have remained illegal under her proposal.

Donovan, who serves on the legal committee of the Delaware chapter of the National Organization for the Reform of Marijuana Laws, visited Legislative Hall wearing on his lapel a gold pin shaped like a cannabis leaf. He and others urged reform, but the measure ultimately failed. "I was a little frustrated with that whole process. So, this was something that I could do," said Donovan, referring to his pro-bono services. The offer stands even if someone is charged with misdemeanors in addition to simple possession; however, he won't take a case for free involving felonies such as intent to distribute, or distribution to a minor, Donovan said. 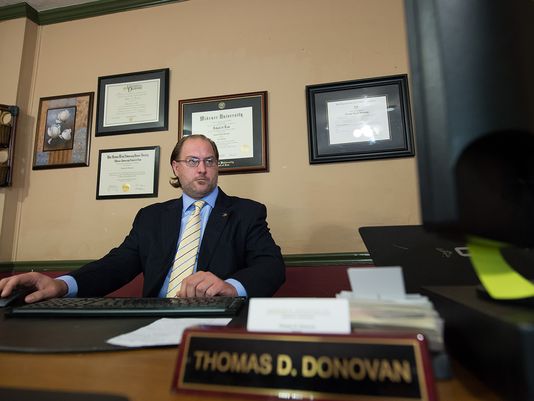