A controversial bill aimed at legalizing recreational marijuana in Delaware will be rewritten in the coming weeks in an effort to shore up support in the General Assembly, according to one of the measure's lead sponsors.

"There is a lot of stuff we have to go through to reach some consensus," state Rep. Helene Keeley, D-South Wilmington said Wednesday. "I plan to sit down with a lot of the groups that have raised some concerns and hopefully come to some kind of agreement."

Keeley's comments came after the latest meeting of the Adult Use Cannabis Task Force, a 25-member panel that has been studying how the First State might regulate and tax legal cannabis since September.

The group's final report — due in late February — could bolster Keeley's effort to make Delaware the ninth state to legalize marijuana consumption for adults.

Keeley co-chairs the task force with state Sen. Margaret Rose Henry, D-Wilmington. The same legislators also co-sponsored a legalization bill introduced last year known as the Delaware Marijuana Control Act. The legislation was voted out of committee in May but never called up for a vote before the full House.

If approved, the measure would permit people 21 and older to purchase up to an ounce of marijuana from dozens of stores authorized to sell the drug. The legislation also would authorize the creation of a marijuana industry that includes cultivation facilities, testing companies and manufacturing businesses.

Supporters estimate legalization could raise close to $25 million in taxes during its first full year of implementation, while also creating dozens of jobs in a newly created industry.

But first, it will have to overcome a laundry list of concerns raised by a coalition of influential organizations that represent police, hospitals, doctors and some of the state's largest employers.

Those groups argue that legalizing cannabis will result in a surge of drugged driving crashes, emergency room visits, drug addiction and children being exposed to marijuana.

"I think one of the biggest outstanding concerns is driving under the influence and we'll have to nail that down," Keeley said.

Currently, no proven roadside test for marijuana intoxication exists that would be similar to the breathalyzers police use to determine a driver's blood alcohol content. Blood tests also can be tricky because marijuana can remain in the circulatory system weeks after consumption.

California on Jan. 1 became the latest state where recreational marijuana can be legally bought and sold. Police agencies there are currently experimenting with new breathalyzer machines and mouth-swab devices, although their accuracy rates are a matter of some debate.

Keeley on Wednesday noted that her bill would direct marijuana tax revenue to training for police to detect drugged drivers. But, she said, Delaware should not wait for accurate roadside testing technology before legalizing marijuana.

"Other states have not been waiting," she said. "Other states that have trained their police officers are able to identify drivers under the influence."

The Delaware State Chamber of Commerce, meanwhile, has called on the task force to recommend changes to the proposed legislation that would exempt companies with a zero-tolerance policy from paying unemployment compensation when a worker tests positive for marijuana.

The business group also wants businesses to be granted immunity from lawsuits filed by workers who injure people or damage property while under the influence of marijuana.

Keeley said some of the chamber's concerns can be addressed with stronger language in the proposed legislation. But she also questioned how marijuana would be different from alcohol or other prohibited substances.

"Delaware is an at-will employment state and you can be fired for almost any circumstances," she said. "Whatever stands true for someone that comes to work high on heroin or drunk, those same rules should also apply."

Camden Police Chief Bill Bryson on Wednesday noted that the proposed legislation limits purchases to one ounce per transaction, but sets no limits on the number of purchases someone can make in a given day — an apparent loophole in the bill.

Lossie Freeman, a special assistant to Wilmington Mayor Michael Purzycki, also pointed out the bill would allow municipalities to require that marijuana businesses obtain a local operating license beyond the $10,000 permit required by the state. But it sets no limit on how much towns and cities can charge.

"Legally, it could allow them to set exorbitant local fees that could make the law not really applicable," she said.

Keeley said those sticking points would be addressed in the task force's final report. But opponents of the legalization question whether those obstacles can be overcome by the task force's planned deadline in late February.

"There is still a lot of unanswered questions and a lot of work that has yet to be done," said Jim Lardear, a spokesman for AAA Mid-Atlantic. "It seems like an aggressive timeline."

AAA, which has been the most vocal opponent of legalization, already has convinced the task force to postpone the release of its final report, which initially was due Jan. 31.

Keeley said she is confident a consensus can be reached in time to get a final report to the Legislature in March and an amended bill approved before the legislative session concludes on July 1.

"I obviously hope it will become law by the time we leave session," she said. "We've done the yeoman's work already. Now it's down to the nitty gritty."

The task force's next meeting will be held Feb. 7. 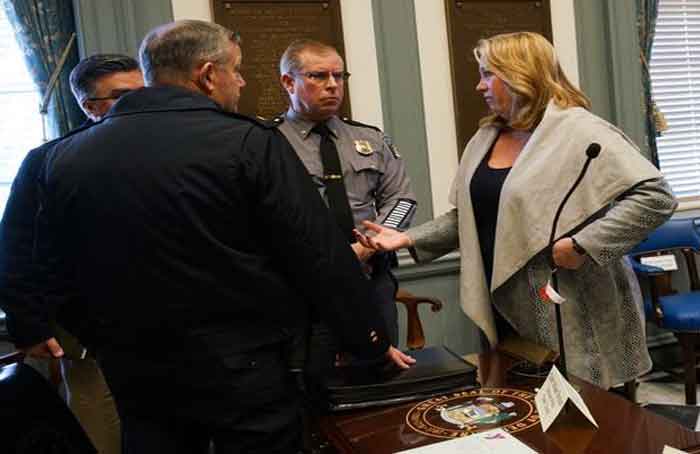 How Delaware Is Lining Up To Legalize Recreational Marijuana