About a year and a half after then Gov. Jon Corzine signed New Jersey's medical marijuana law, it still awaits implementation.

Since former Gov. Corzine signed the Compassionate Use Medical Marijuana Act, the Christie administration has imposed restrictions and regulations that muffle the simple legislative intent of providing some relief to state residents suffering unbearable pain.

And even though the governor has prevailed on several facets of the program – including limits on the drug's potency and restrictions on available strains, as well as a marathon of rules and restraints on access and distribution points – he is reluctant to proceed.

The program, considered to have the most careful and stringent regulations in the country, was to have started in July 2010. After several delays, the new target date was July 2011. At this point, eight days and counting, it looks unlikely.

Having gained most of the concessions he sought, the governor now hesitates due to the possibility of U.S. prosecution. Although several states have programs in place, dispensation of medical marijuana is against federal law. However, the "Ogden Memo," from U.S. Attorney General Eric Holder, guides federal officials to leave alone those medical marijuana operations complying with state law.

It is true that federal agents have raided pot shops in Montana, Washington and California as they try to get a handle on dispensaries proliferating with little regulation.
However, there is a vast difference between those operations and the ones that New Jersey has planned. Some dispensaries in California and Colorado, for instance, have their products labeled with catchy names and lined up on shelves like an old-fashioned apothecary. Operators of the trendy boutiques where "walk-ins are welcome" are suspected of illegally selling to customers without proven medical needs.

Contrast that with New Jersey, where the law provides for just six grower-dispensers to start. The clinics would not be able to advertise their prices; their signs could not specify that they're providing marijuana; and patients would have to show long-term relationships with doctors who recommend the drug. The carefully screened proprietors will not be selling bongs.

While Gov. Christie waits for assurances from federal authorities that New Jersey will not be the scene of such raids, such a guarantee is about as unlikely as the possibility of federal agents descending on the utilitarian, tightly regulated dispensaries the state has planned.

The governor's fears are unfounded. They are prolonging the pain of hundreds of thousands of New Jerseyans who look to the state to carry out its own law. 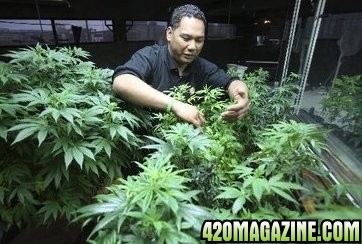