With clouds of smoke perched above their heads, tens of thousands of marijuana enthusiasts in Denver and Boulder puffed their way into the national pot spotlight Wednesday, the first tokes of what organizers hope will be a grassroots movement to legalize marijuana.

The annual April 20 pro-marijuana smoke- fests in the two cities – known as 420 rallies – are reputedly the largest of their kind in the world on a day that is regarded as a ganja holiday.

An estimated 10,000 people attended the unsanctioned rally on the University of Colorado campus in Boulder. Organizers
Police wrote a total of 10 marijuana-possession or public-consumption tickets in Denver, but no major troubles were reported at either event. Officers mostly stood to the side to make sure things didn't get out of control.

The rallies' popularity has come to symbolize Colorado's claim as the nation's cannabis capital. That claim will get a boost today when the National Organization for the Reform of Marijuana Laws opens its annual conference in Denver – a location and timing that are not coincidental.

"Colorado has emerged as the geographic center of legal medical cannabis in America," Allen St. Pierre, NORML's executive director, wrote in an announcement for the conference. "Colorado is at the center of this public discussion and positive changes in laws."

Marijuana-legalization proponents – in loud and often expletive-filled speeches – sought to capitalize on the recreational-driven rallies to galvanize a political movement. Organizers for Legalize 2012, a prospective ballot- initiative campaign, handed out stickers. Speakers urged voter registration and defiance of authority.

But interviews with rallygoers hinted at how difficult it may be to mobilize the eclectic voting bloc in attendance. An 18-year-old woman in Denver who gave her name only as Danielle said she supports the legalization movement. Then she conceded that she is not registered to vote. 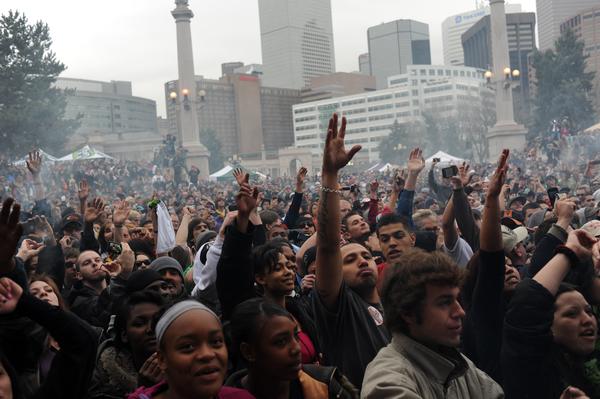 Organizers of the Denver rally claimed Wednesday's crowd size to be 50,000, but police officials put their estimate at between 15,000 and 30,000. (RJ Sangosti, The Denver Post) 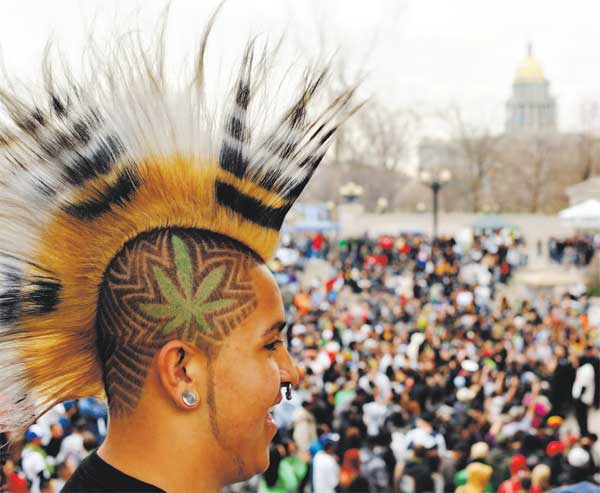 Philippe Quezada of Denver shows his stripes Wednesday during the annual 420 rally at Civic Center in downtown Denver. Denver's and Boulder's pro-marijuana smokefests – whose numeric name comes from the month and date of the event – are reputedly the largest of their kind in the world. (RJ Sangosti, The Denver Post)​

More power for the people the less power for the government that's what they are scared of.
Believe nothing that you hear and only half of what you see.