Denver voters could have their pick in November between two initiatives aimed at allowing social use of marijuana in different places.

One group has been gathering signatures for an initiative that would allow private marijuana consumption clubs. The other has a more expansive aim: to allow nearly any business, including a bar, to offer a set-off, 21-and-over public “consumption area,” so long as the owner obtains a neighborhood group’s support first.

For its private clubs initiative, the Denver chapter of the National Organization for the Reform of Marijuana Laws (NORML) has a two-month head start on its ballot petition. The other group of activists - including some who pulled a social-use initiative last year - initiated the process Tuesday afternoon by meeting with an assistant city attorney and the City Council’s director for input on its proposed language.

That group, which includes the Marijuana Policy Project, law firm Vicente Sederberg and business owners, says it has tweaked its approach as a result of meetings with city officials, following its withdrawal of last year’s initiative, as well as consideration of recent neighborhood push-back against the marijuana industry.

The consumption areas would be allowed for four years, unless the council tweaks the approach or makes it permanent by the end of 2020. The proposal is titled “The Neighborhood Approved Cannabis Consumption Pilot Program.”

Primary sponsor Kayvan Khalatbari, a marijuana business owner and consultant, says the group is aiming to persuade Denver NORML to drop its private clubs initiative. That is in part because he sees private clubs as further segregating marijuana use rather than integrating it into society.

Jordan Person, the NORML chapter’s executive director, says that won’t happen. The group’s all-volunteer petitioning force is about halfway toward its signature goal, she said.

“We have no reason to withdraw when we’ve made it so far,” Person said. “That would be ridiculous.”

To get on the ballot, it takes nearly 4,800 verified signatures from registered Denver voters.

Person sees private clubs as the approach that voters are more likely to support. She said the public-use aim of the competing group could run afoul of Colorado’s Amendment 64, which legalized recreational marijuana sales and possession, and state law.

Afterward, he said that his group’s proposal took into consideration neighborhood advocates’ cries for more input on the direction of the marijuana industry and for less concentration of businesses serving marijuana customers. By allowing small consumption areas at more businesses instead of at a few dedicated private clubs, he said, the city would be respecting that wish.

“I just think it’s more considerate of all the things we’ve learned in the cannabis industry here in the last six months or a year, with all the stakeholders and their input,” Khalatbari said.

Its proposal says the required support for a consumption area permit could come from a local neighborhood group or business improvement district. Those would have the power to set conditions on how the area is operated by requesting a good-neighbor agreement.

Businesses would obtain permits annually for consumption areas or on a temporary basis.

Similar to NORML’s proposed private clubs initiative, customers would need to bring their own marijuana products. Smoking wouldn’t be allowed indoors, but vaping likely would be.

State law bars anyone holding a marijuana business license from allowing consumption on site, so the industry itself couldn’t take advantage.

During Tuesday’s meeting with the council staff, Khalatbari and attorneys Christian Sederberg and Josh Kappel faced questions on several fronts. Those included the potential that one recognized neighborhood group or business district could overrule another in areas with more than one group, and the unprecedented delegation of influence on a licensing decision to outside groups.

Backers of the competing ballot proposals disagree on what would happen if voters were to approve both. Person says each could take effect, while Khalatbari’s group says only the one that receives more votes would take effect.

Khalatbari’s group, which hopes to obtain certification from the Denver Elections Division in coming days, says it intends to begin collecting signatures as soon as this weekend. 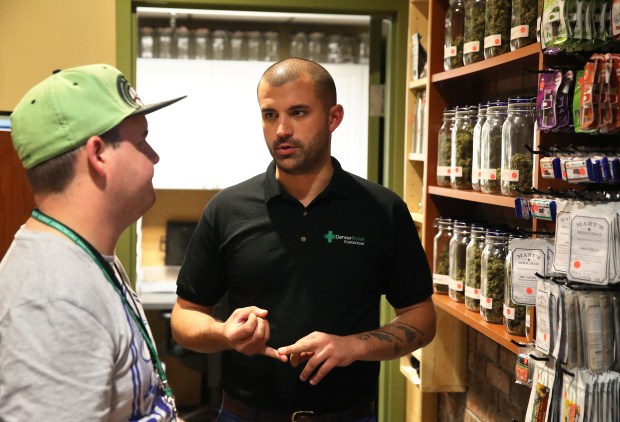