California - After years of side effects from prescription drugs, Robert Carpenter started growing marijuana at his southeast Fresno home to relieve his chronic pain. Today, the 52-year-old Carpenter has 12 immature plants in a locked greenhouse surrounded by a garden with cucumbers, squash, strawberries, onions, asparagus, tomatoes and almost anything else that can grow out of his chunk of the San Joaquin Valley's fertile land. But his pot plot was put in jeopardy in March when the Fresno City Council approved a ban on medical marijuana cultivation similar to one supported two months earlier by Fresno County supervisors. Both the city and county cited violent incidents stemming from marijuana grows.

Carpenter and his wife, Florinda, 54, are nervous about the new city ordinance going into effect. "We are concerned we won't be able to self-medicate," Carpenter said. "We hope the city will have second thoughts." For now, the city's law is in a 120-day grace period. Meantime, Fresno City Council members have formed a subcommittee that is meeting with members of the medical marijuana community, lawyers and police to craft a kinder, gentler ordinance. In 2004, the state established rules that allowed qualified medical marijuana patients to possess 12 immature or six mature plants and up to a half-pound of dried, processed marijuana. Counties and cities can establish higher thresholds, but not lower, the law said.

Legal complications
But, in 2012 the city of Live Oak in Northern California enacted a cultivation ban that was upheld by lower-level courts. The state Supreme Court declined to hear the case, keeping lower-court rulings intact. As the Live Oak case was winding through the courts, Fresno County and Fresno city officials approved cultivation bans with civil fines of $1,000 per plant. The county's ordinance is in effect. Both Fresno police and Fresno County sheriff's deputies have linked marijuana operations with violent crime and have seized thousands of pounds of marijuana. Many cases involved medical marijuana patients.

While the county has maintained a zero tolerance policy for marijuana growing sites, City Council Member Oliver Baines said the city "wanted people to have a pathway (for medication) and we are now exploring what that pathway should be." He said he thinks 12 plants are too many and that a suitable number would be three or four plants. Fresno City Attorney Douglas Sloan said Friday that a draft of the city's revised ordinance would allow a maximum four plants per residence and establishment of one cooperative in the city.

A nonprofit cooperative would let marijuana patients pool their crop, but they also could buy supplies from other vendors, Sloan said. There will be no limit on the number of members and no rules about where members can live, he said. "This is a compromise," he said. "It won't be ideal for everyone." Lawyer Brenda Linder, who is fighting the county's ordinance in court because of what she says are excessive fines, also sat in on the subcommittee meetings. She said she was encouraged by the city's willingness to allow some growing by qualified medical marijuana patients. Right now, the number is zero, so any higher number is an improvement, she said.

"Unless everyone is going to sue all the time, this is a step in the right direction," she said. "They (city of Fresno) are coming up with what they can live with and what they can't." Still, Linder thinks the city and county ordinances don't comply with existing state rules. Council Member Clint Olivier, who sits on the subcommittee with Baines and Blong Xiong, said the state will eventually have to intervene.

There can't be different laws for every community, Olivier said. But in the meantime, the city of Fresno must find a way to work with people who need medical marijuana "so that sick people can be dealt with with compassion and we keep our neighborhoods from turning into marijuana grows." Compassion seems to be in short supply, Robert Carpenter said. In recent years, neighbors called code enforcement or police to the home where the Carpenters have lived for the past 26 years because of his 12 plants.

Carpenter, who is diagnosed with a musculoskeletal disease, said he is willing to risk a fine -- $1,000 per plant -- so he can substitute marijuana for his former pharmacopeia of Percocet, Darvocet, Celebrex, Vicodin, Tramadol and Topamax. He is adamant that state law allows him to keep a dozen knee-high plants. By having 12, he said, he can have different varieties of marijuana that he and his wife need to relieve pain or allow them to sleep. "Three or four plants aren't going to be enough," he said.

Plants can get infestations or die for other reasons, so having a smaller numbers of plants prevents him from allowing another seedling to grow in time for harvest, he said. Unlike some reports that indicate a pound or more can come from each plant, Carpenter said his 12 plants yield about 4 or 5 ounces each, which is a year's supply for him and his wife. The reason his plants' yield is lower, he said, is that he doesn't want to attract attention from criminals by letting them grow too high.

Pay a permit fee?
Carpenter said he would pay a small permit fee to keep the plants and suggests that the city band each one -- like animals surveyed in the wild -- and check them periodically to ensure that patients are conforming to city rules. Carpenter, who said he has pain related to nearly a dozen surgeries on his wrists, knees, shoulders and elbow, lives with his wife on his $1,904 monthly Social Security check. He does not sell his marijuana and as proof once showed a visiting police officer his bank account's negative balance.

Carpenter had been using medical marijuana in combination with prescription drugs, but the outcome was not good. If one side effect was insomnia, he was prescribed another medication that had other side effects. "Emotionally and physically, it was hurting me," he said. Nine years ago, he stopped taking all prescription drugs, but after a bout with high blood pressure, he started taking blood pressure medication -- but nothing else.

Florinda Carpenter also struggled with serious side effects from prescription drugs. She was disabled in a workplace accident and suffers from pain from a herniated disc and damaged vertebrae. She lists a half dozen that didn't work. "I was popping them like candy," she said. "I was in frustration with the pain." Both say medical marijuana dulls their pain enough to make occasional chores, like gardening in short bursts, exhausting and painful, but tolerable. Robert Carpenter said he is proud that he saves taxpayers money when he and his wife use medical marijuana instead of billing Medi-Cal for drugs. "I am taking care of her needs and my needs," he said. "I know what the medicine does, so I will keep growing it." 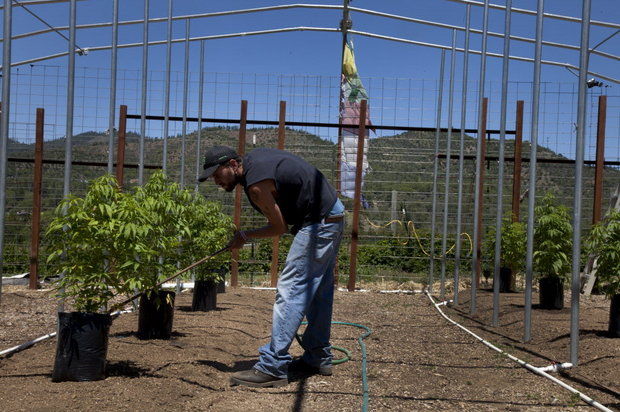