Hundreds of people turned out Monday to speak out against rules being proposed by the Department of Health and Human Services to regulate medical marijuana.

DHHS has to amend the rules to align with the medical marijuana reform bill that passed through the legislature last year. But the lawmakers who crafted the law say the rules are straying from its intent. Medical marijuana proponents take issue with several of the rules, particularly the ones that deal with outdoor growing. They say the law was written to allow outdoor cultivation within an enclosed, locked facility. But many people who grow say the rules are too restrictive.

"I suffered a loss of marijuana last year," Jcob McClure of Washington said. "I got ripped off. And the reason I think I got ripped off is because I built this humongous cage in my backyard to become legally compliant and unfortunately I was unable to conceal it from the road. It was like a sign saying medical marijuana grown here, and I came up with some missing."

Once DHHS reviews the testimony and finalizes the rules, they will go to the Attorney General's office for final approval. 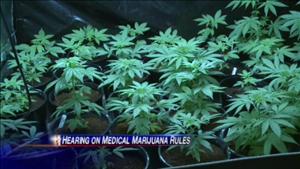