The state of Colorado is due to respond later this month to a lawsuit by two states that want the U.S. Supreme Court to halt legalized marijuana.

Oklahoma and Nebraska claim Colorado's legal pot is in violation of federal law and is causing problems in their states.

The problem, they claim, is that Colorado's pot is being transported across state lines into areas where it is still banned.

Some of that pot may be coming from a big dispensary in a small Colorado town just south of the Nebraska panhandle.

Sedgwick, the town in question, is a study in contrast. It's about as northeast in Colorado as you can get, and has a population of approximately 150. Many of its downtown buildings seem frozen in time, but amid them now is a dispensary that sells both medical and recreational marijuana.

Patrons at Sedgwick Alternative Relief come from far and wide, as evidenced by the license plates on the vehicles parked outside on any given day.

Some visitors stay across the street at a bed and breakfast.

"I see people from all over the country coming, and I'm not sure where they are taking it," said Lupe Pena-Casias, who runs the bed and breakfast.

John Jenson is sheriff of Cheyenne County, Nebraska, which sits right on the border. He says his department is regularly confiscating pot from Colorado.

"Somebody will go to Colorado, purchase x amount of marijuana, bring it back up here and resell it," he said.
Jensen showed CBS4 some of the pot that has been confiscated by his department recently. The Sedgwick dispenary's name was on some it, some was from Denver and some was in packaging marked with a Colorado Department of Revenue seal.

When you enter Nebraska, Sidney is one of the first towns you get to. CBS4 toured the town with Police Chief B.J. Wilkinson, who also wants the Supreme Court to act.

"What we are asking for is, tell us that Colorado is not in compliance with federal law and make them rescind their legalization statute," Wilkinson said.

Wilkinson also has a collection of evidence, including marijuana in containers marked "Always Buy Colorado."

"None of this is supposed to be in Nebraska," he said.

One Nebraska woman who wishes to remain anonymous told CBS4 she has been busted three times for possession of marijuana.

"If there wasn't a dispensary just across the border would people still be going to Colorado?" CBS4's Rick Sallinger asked her.

"Oh definitely. I know people who don't go even go to the dispensary so close to the border," she said.

But Sedgwick Alternative Relief is conveniently located for those who want to make an illegal border carry-over. CBS4 was curious what they tell customers who indicate they plan to take their pot out of state. With a hidden camera, Sallinger asked "What happens if i bring this into Nebraska?"

"I can't recommend that from a legal standpoint," a budtender replied. "It is illegal in the eyes of the law to take it out of state."

But Sedgwick Alternative Relief can't stop those who might want to go elsewhere.

"Are you planning to bring the marijuana out of state?" Sallinger asked one customer outside the store.
"I can't say. That's incriminating," the customer said.

It is not known yet whether the Supreme Court will hear the case.

The owner of Sedgwick Alternative Relief did not respond to CBS4's requests for a comment on this story. 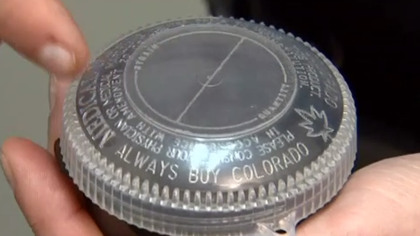 Sedgwick, A Struggling Town On The Colorado Prairie, Found Salvation In Legalized Pot

J
Nebraska, Oklahoma In Border War With Colorado Over Marijuana