So, doing a rearrangement of the tent to take some clones to flower before i do my next grow from seed.

I had a watering system set up that gravity fed via a ball valve tap timer onto watering (felt) mat in trays. Bottom up watering into the pots. Worked ok, but had to get the timer set right.

Anyhow, for something different have now gotten an Autopot Smartvalve and connected that to my tank on the self. Feeds into a large tray rather than discrete pots as i want a bit of flexibility in # of plants and arrangements.

Other Smartvalve in similar setup in my nally bin "spacebox". 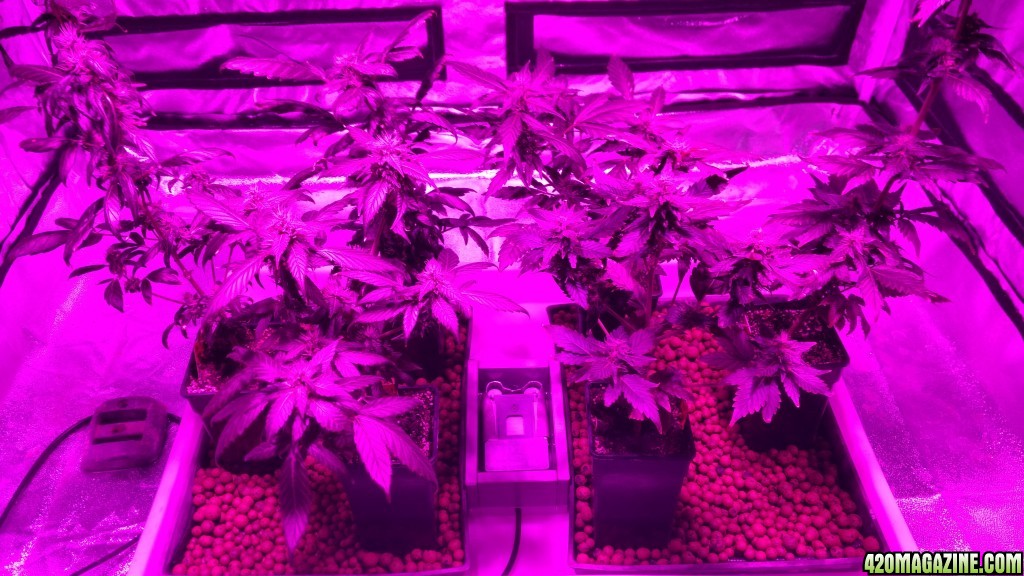 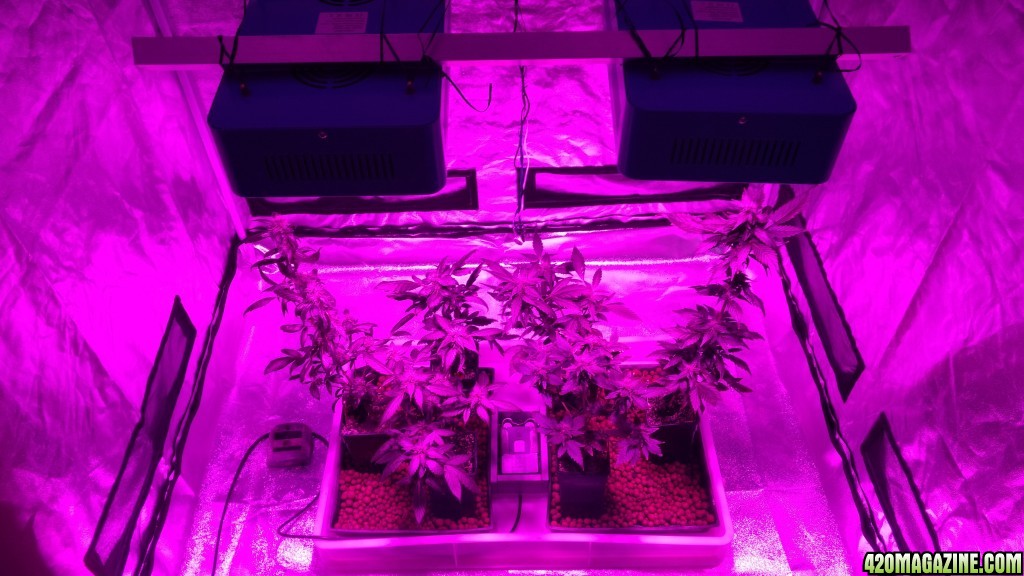 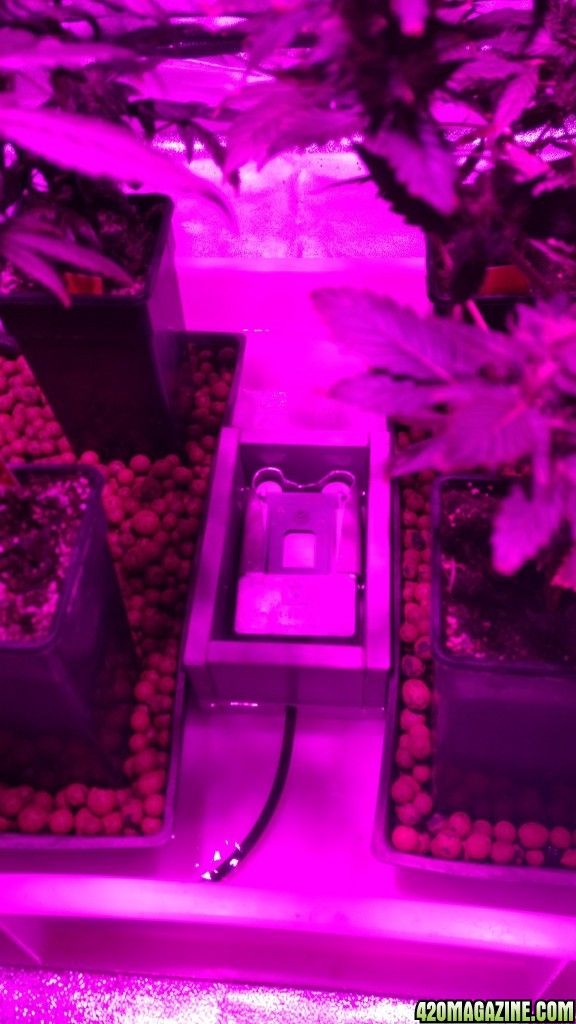 Seriously burple photos....did not look that way in real life???

Issue i found was that at the moment i only have 6, small plants in small pots and since I have just switched to COB Leds from a 600W HPS , the tent is cooler and less evaporation AND transpiration happening. So.........too much water in the tray (volume not depth) when full and takes ages to do wet /dry cycle. Think have solved that by using seedling trays full of washed expanded clay to take up some volume in the tray. Less water per cycle should give a faster cycle time and better oxygenated root zone.

Bought the Smartvalves, but shop had no covers for them, and you need to somehow stop the units floating for them to work. I think in proper Autopots they click in?? Anyhow, some sheet lead wrapped around the back in such a way as NOT to interfere with the outside float worked a treat. To make sure no expanded clay gets in there i build a couple of enclosures out of 12mm plastic. Slots around the bottom edge for drainage and the one for the 4mm feed hose helps hold it down nicely as the plastic is quite dense and heavy.

Anyway, will see how it goes. Have some clones of the best female plant of my first grow in the box, hopefully growing roots at the moment.

If they go ok, next setup for the tent will be 4 x 250mm pots in two black nally bins. Pots will sit in holes cut in the nally bin lids that i have made up (pot base will just sit on the bottom of the nally bin with its top rim on the lid). Filling port in each lid and a Smartvalve in each nally bin.

Will post some photos when i set it up.

One idea i had that i may apply down the track a bit would be to use the same lids and pots, but with the deeper nally bins and a couple of small pond pumps on a timer to have a recirculating hydroponics setup. The water level in the deeper nally bin would give me about 15-18l water capacity with the pot bases being always out of the water. The pond pumps lift the fluid up a pipe, into the pots and it drains back into the nally bin and recirculates.

At the moment i am finding soil growing easy and somewhat forgiving. Am very impressed with the Autopot Smartvavles and their simplicity.
Philthegeek
Sunset side of the Great South Land.
Philthegeek 2019 Grow #2 :)
Philthegeek, 2019 Grow :)
DIY Autopot Smartvalve setup
Happy contributor of experimental results to:

Hey all. Old thread but hey. Have moved on a bit in terms of my DIY / smartvalve setup.

Worked out that filling most of the space in the tray is a good thing as the water cycles flood / drain faster, but filling in the space with clay balls or bricks was a bit inconvenient handling wise.

Have had it running a couple of weeks now. First thing i noticed was that after the pots had initially soaked up whatever the soil mix wanted, the rate at which the jerry can i use as a tank depletes has gone way down, and its happening in smaller increments. 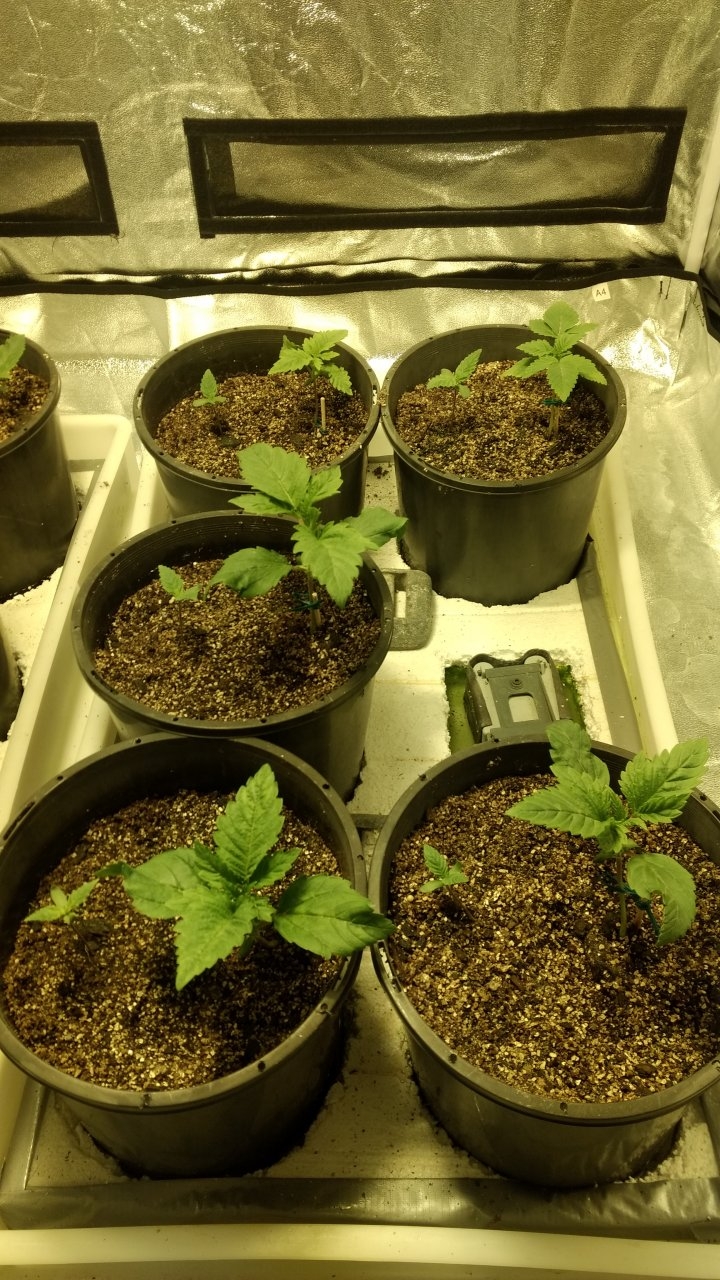 Its overall a bit messy to make carving out the polystyrene, but i think its an easy and simple system i'll go with for a while.

Looks good. Im interested to see how it goes

All seems to be working pretty well .

I'm on day 31 of this grow. They are getting just water through the smartvalve system. Have quite a few roots out the bottom of the pots now making their way around the tray under the polystyrene. Nice white and healthy looking roots.

Every wee or so am doing about 200ml / pot top down water with dilute worm juice and Neem.

Bit of algae growth on the holes where the smartvalves sit but am planning on pulling htose out and cleaning occasionaly. Could probably solve that by covering that section with a black plastic box.

Next grow i go back to 50% perlite rather than the 50% vermiculite in this one. Plants ok and seem to have healthy root zone, but the soil is holding a bit more water than i would like.

My tent at the moment. 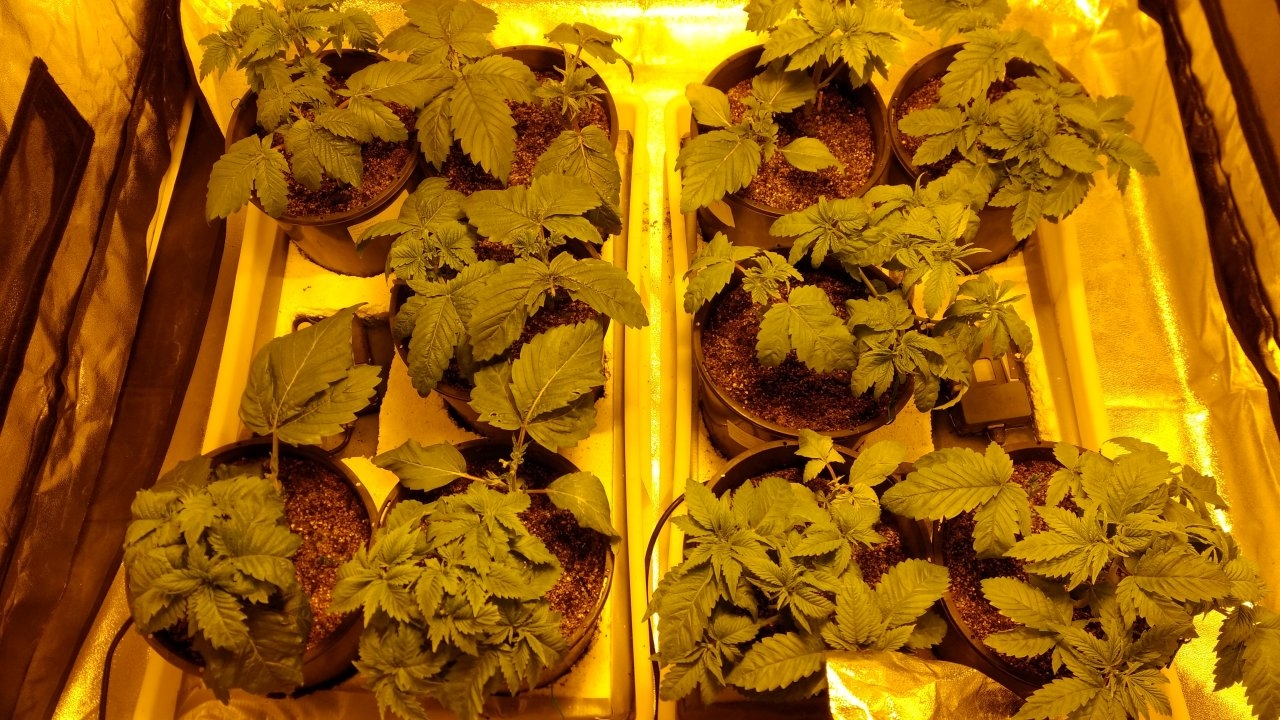 Looks like u are Professional and i think u better make sure balack box clear everyweek.

Not professional with these plants...hobbyist only.

Still this system seems to work and meet my needs. Confident enough with it now that i'm happy to go away for a few days after leaving it with a full tank. Current grow the plants are big enough and now have 1000W light rather than a 600W ( so its now a few degrees warmer in there) that a 20l jerry can is lasting 4-5 days or so now, and as i'm a soil grower i can let it go 6-7 days between fills.

With yet another iteration of an Autopot Smartbalve based bottom up watering system. I like to tinker.

Just finished a very small grow i had going on the side. 4 plants in 2 pots of perlite set up as a DWC hydro. Haven't done hydro properly before and was an experiment. Not real happy with the amount of attention a hydro system needs so am now setting up for a proper grow. 1 plant / pot in soil mix that is 50% perlite. Have used this before and works well for bottom up watering once the seedlings are established.

Anyway, have refined the smartvalve system using the nally bins and lids i made up for the DWC attempt. Gravity fed from a 20l on the shelf. Simple, nuthing electric. Washed everything in vinegar. Usin the paving bricks to reduce the standing volume. The polystyrene i used last time was messy. Using a lead dive weight to make sure the smartvalves stay properly seated on the bottom, but no lead in the water to maybe contaminate anything.

Also, this will give me a nice dark root zone. Will have a look tomorrow...may get out the little aquarium air pump i used for the DWC and put 1 airstone in each bin so there is no possibility of them going at all anaerobic.

Photos pretty much say it. 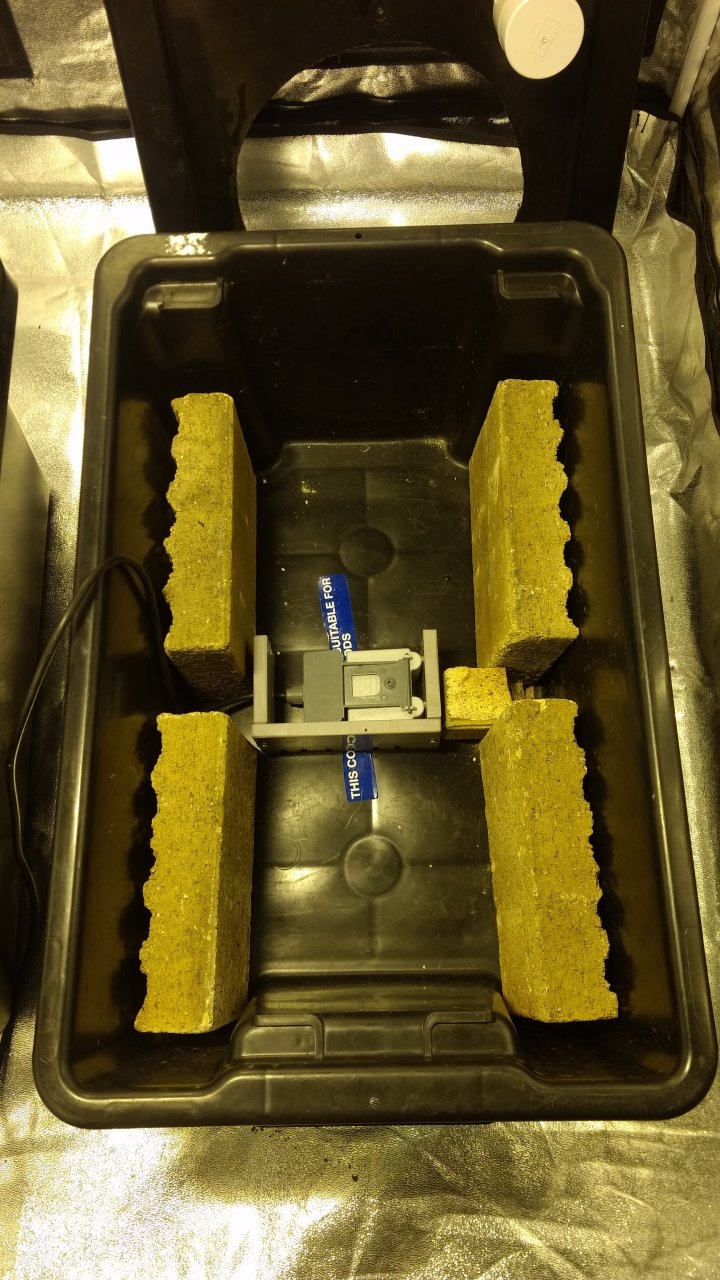 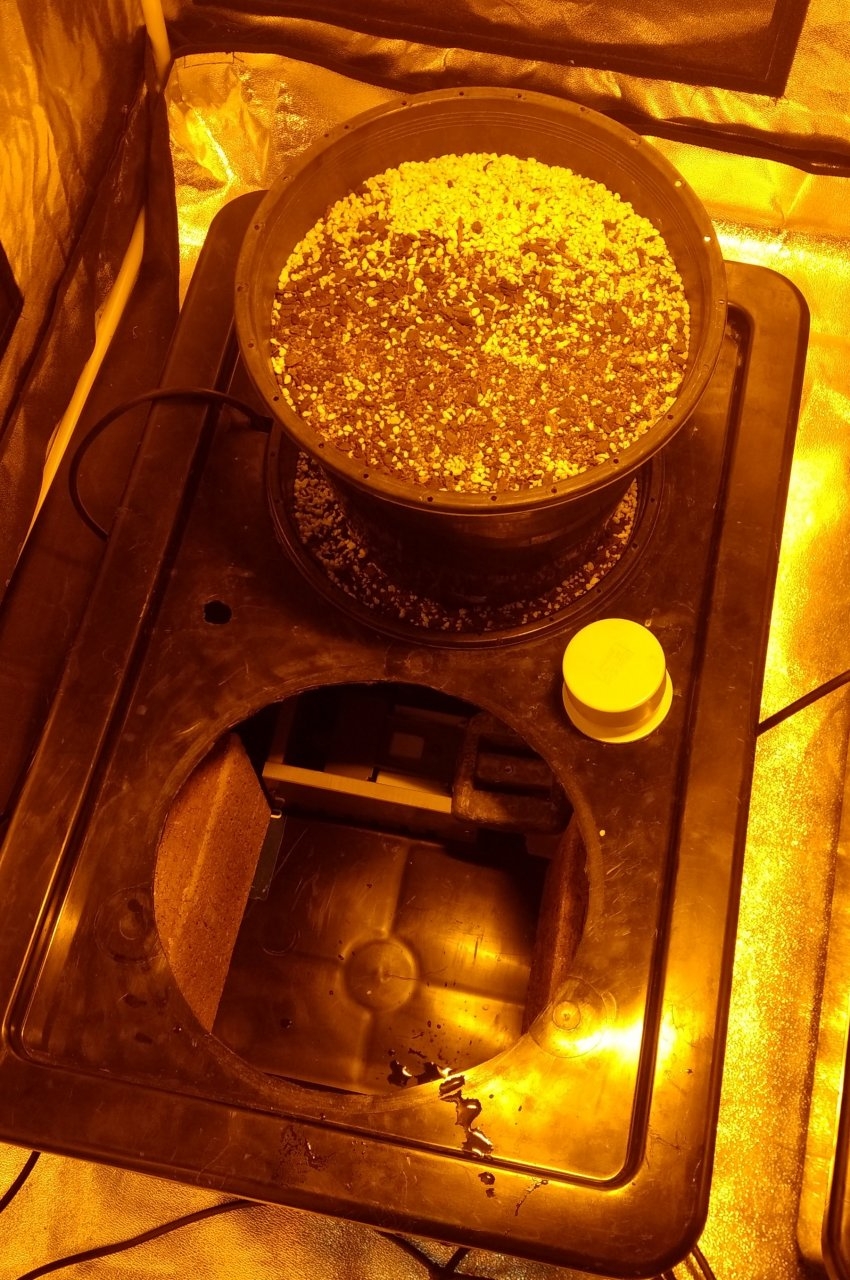 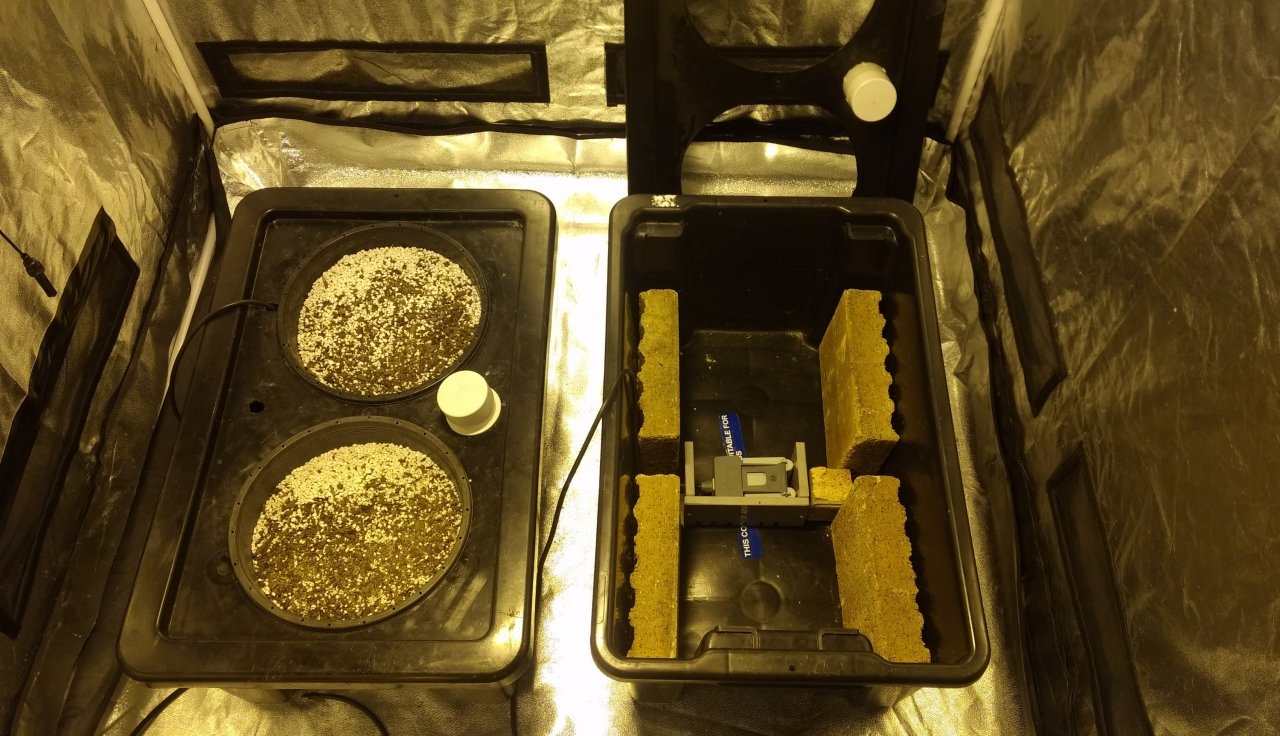 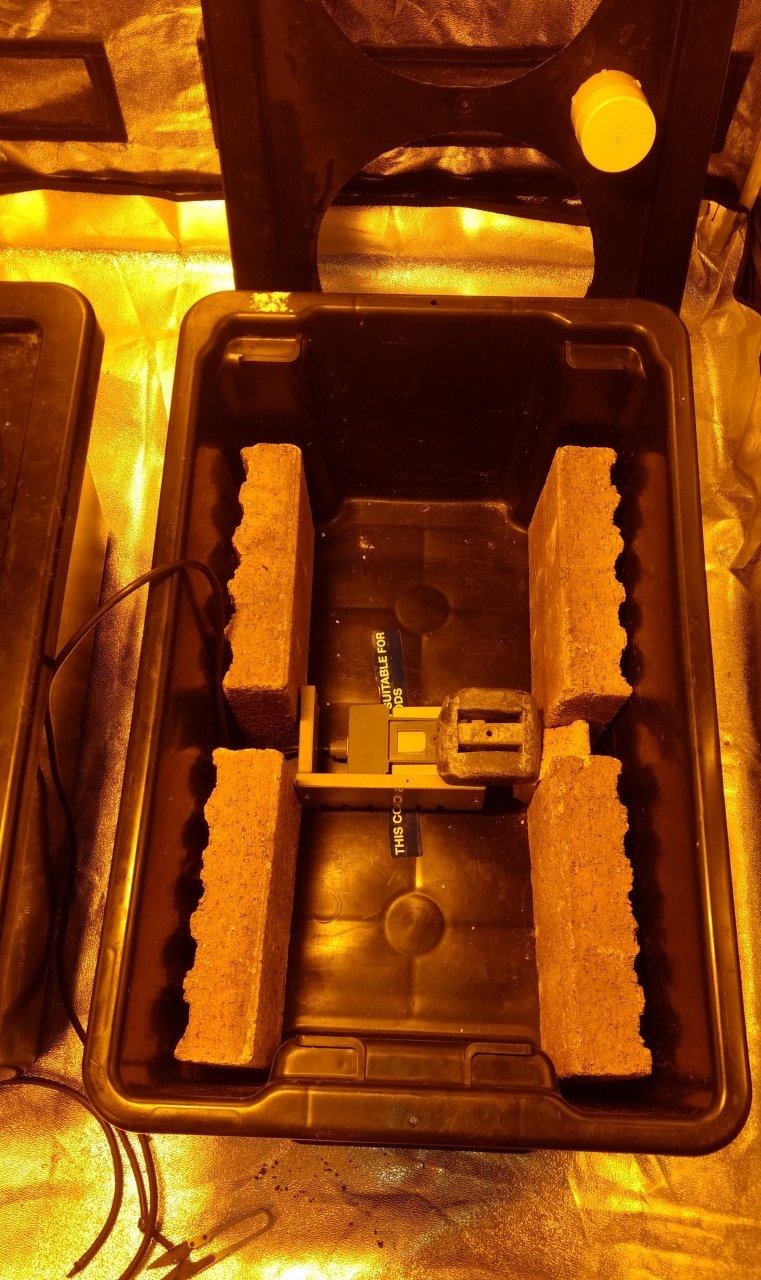 Looking good Bud
quick tip for ya on cutting the polystyrene though to make it much neater and cleaner
Take some non conductive material like a couple of wooden dowel or similar ( Ive used a forked branch once )
take a piece of fine wire like piano wire or guitar string and wrap it around one side of your fork and then fairly tight around the other side . OK
make sure you leave a little tag end at each wrap that way you can clip the leads of a small DC supply or a small battery charger or even a 6v lantern battery will work maybe even a car type
now you have a small heated wire that will slice the poly clean and quick into any thing you want.
if it gets too hot disconnect it and let it cool then repeat. This work with any ploy or rigid insulation and virtually no mess and the pieces you cut may now be re used possibly
Just my 2 cents
D

The polystyrene thing is something that was a quick and dirty. We actually have a hot wire cutter here at work for that but i was too lazy to walk up the hill and get it at the time.

Current grow with the nally bin, bricks thing seems to be working ok. Plants too small to be drawing much at the moment Still top down watering small plants in big pots till the roots develop more, but pots are dry on top, damp 30mm down which is how i like it.

One thing i am really pleased with is that the Autopot Smartvalves are reliable and no timers, pumps involved. If i wanted to crank up the sophistication at all would look at a tank that has a float valve connected to mains water. But, lifting the 20l off the shelf, filling it and lifting it back on a weekly basis ( a little more often when in flowering) isn't much of a chore.

I'm running a 1000W HPS in a 4x4 tent. Dimmed down to 600W for veg to save power.
Philthegeek
Sunset side of the Great South Land.
Philthegeek 2019 Grow #2 :)
Philthegeek, 2019 Grow :)
DIY Autopot Smartvalve setup
Happy contributor of experimental results to: