Hello, Id like to share with everyone my DIY on a bucket/carbon scrubber. There are a number of various ways of doing suck a thing, and this is mine.

First I purchased a few key items. Activated Carbon, an exhaust fan, duct tape, 5 gal bucket, lid for 5g pail, and a few other small various items ill, found around the house, which ill mention as I move along.

My intent is to keep this short, there are many other posts explaining the basic methods I've used here. Bottom line is, does it work? I was very skeptical when researching various methods. Does Ona work, that's the question from newbers like me.... Ill answer that in a moment.

First, this is the fan I purchased; the highest CFM rated one from the trusty local big box. 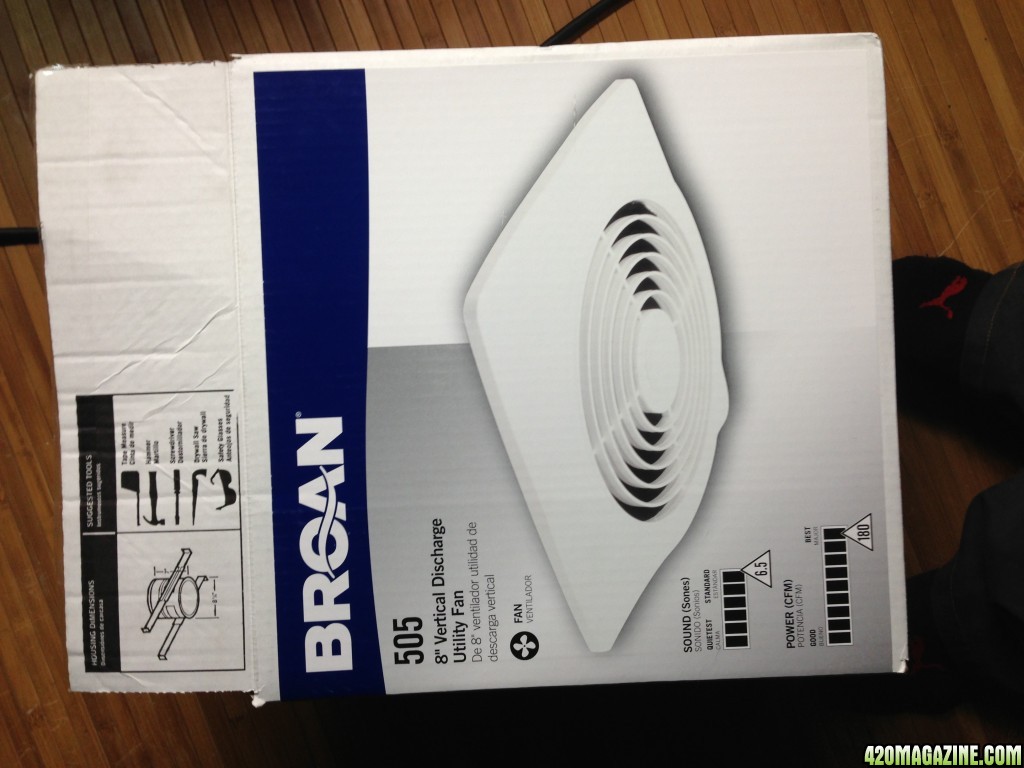 I placed the fan on the 5 gal bucket lid and traced its diameter. Then took a carpenters knife and cut out the outlined area. BAM! I've got a lid with an 8" hole in it. I placed the fan in the hole and sealed it w/ duct tape. I made certain I was pulling the air into the bucket, so airflow goes .... (Down?). I've taken a 1" spade bit (wood bit) and very carefully/gently drilled approximately a dozen holes. Don't drill any holes on the bottom 3-4" of the bucket as it'll need to hold a bit of water/Ona. Here's a pic of the fan to lid mount: 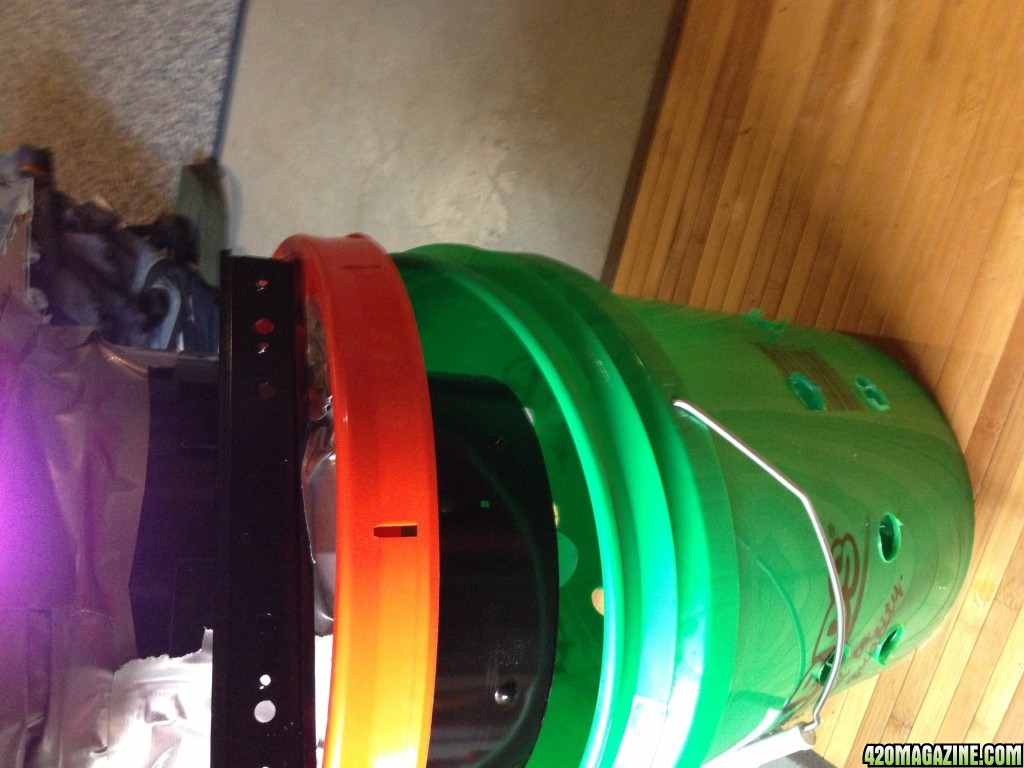 On the opposite of the fan, I built a shallow framed box to hold activated carbon. I built a shallow tray to hold some pre filter material (Which prevents the carbon from falling into, and through, the Fan). I had some aluminum tape on hand around the house and sealed the tray using that; It works really well, and is air tight. 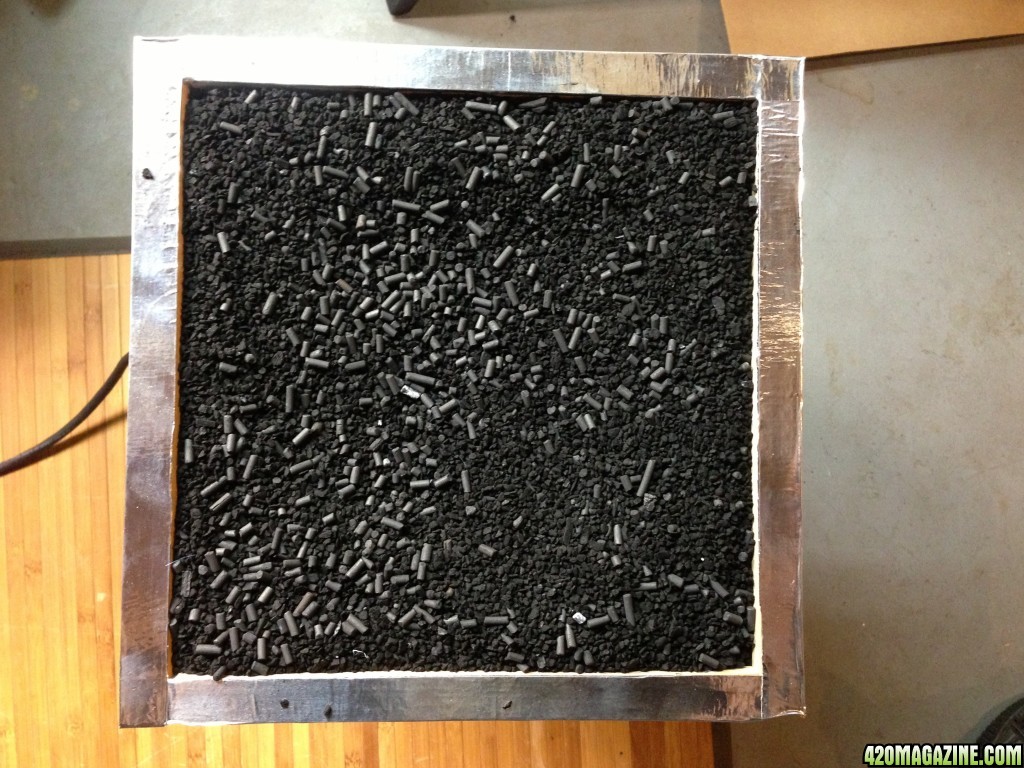 The scrubber alone does a really good job of removing that delicious smell I love so much. But IT'S NOT 100%. I purchased some Ona as well. Fresh linen & apple crumble gel. I've heard some concerns that people get fresh linen scent because if others have questions it's just 'fresh linen' smell (less suspicious some say), but in my opinion the Apple crumble smells like a variety of fragranced detergent. It's delicious and a bit less (sterile?) smelling.

I add a bit of ona in the bottom of the bucket along with some water and it scrubs, neutralizes, and freshens. 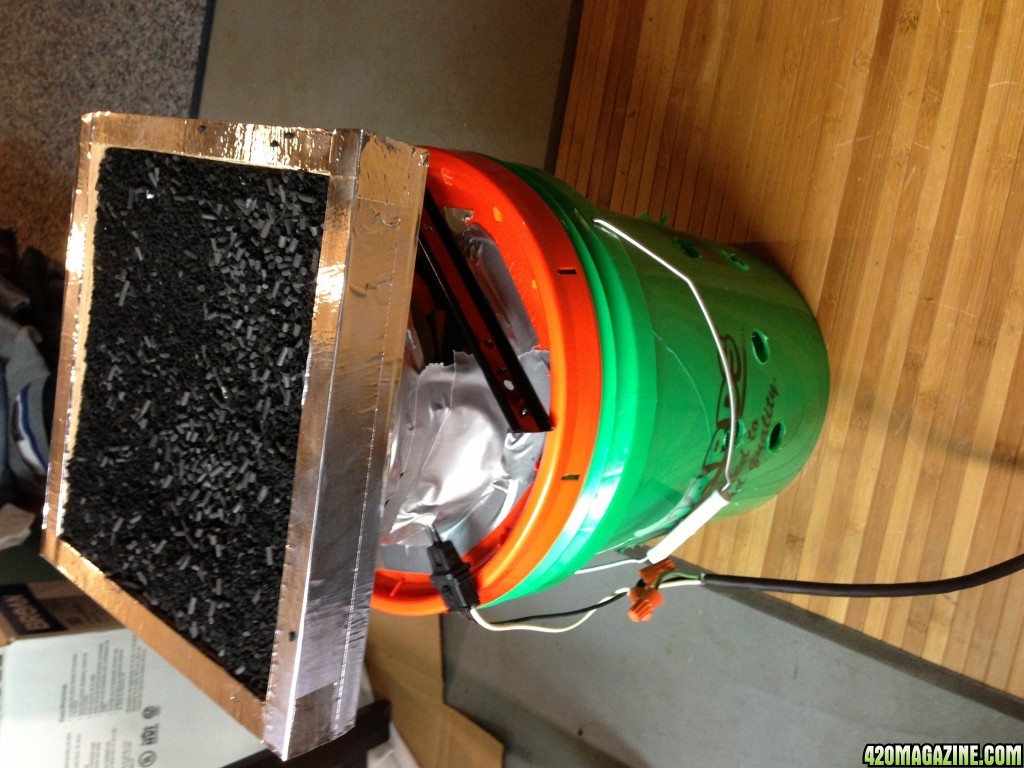 I have my set up in the basement; 2 story bungalow with approximately 800 sq ft of living space on the main living floor. The basement is mostly open with a couple small adjoining rooms. Used space in the basement is approx 600 sq ft. Does the ona bucket work (with my DIY carbon scrubber) Yes. A profound YES. IT'S AWESOME!! However, I suspect there would b a limit on what that beauty could handle. It's not gonna scrub a massive farm. In my case, my plan was to have two dwc plants, one per net. I'm just getting switched to hydro so I was starting from scratch and raised a couple 'really nice' MALES. Baaaaa! My inlaw came to the rescue and found a couple teeny weenie plants to replace my loss, just to help so I am able to cover my investment thus far. The plants were already switched to a 12/12 when I received them, so I continued w/bloom. They've turned out better than expected but certainly did not fill my net as I planned. Buuuut, I'm thankful to have anything. The strain is WW, days from harvest. 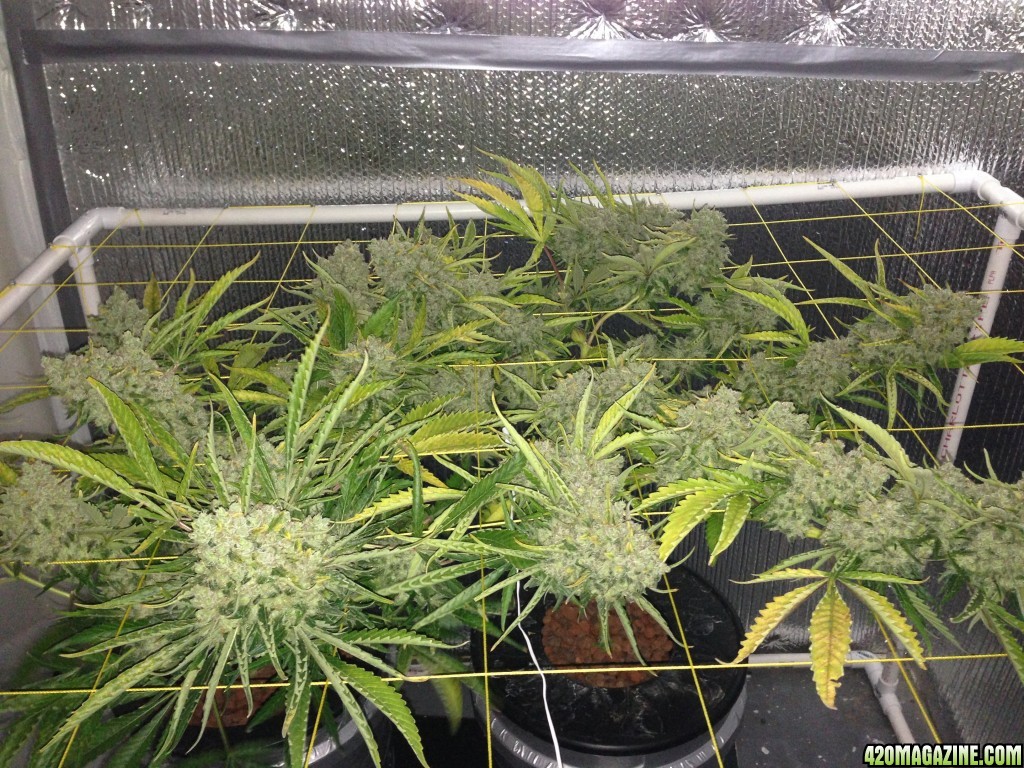 Thanks for this great idea.

How would you describe the level of noise?

Both the noise of the fan itself and the actual build is interesting.
Thinking maby the sound of the fan kind of "ecco's" in the bucket?

Great idea. I'm at that point with my room.
Thanks
FIRST GROW with MARS ll 1600w and Growology
D

Do you place your ONA bucket inside your actual grow space, or just in the nearby area? Do you also use a carbon filter on the exhaust from your grow space?

And how much ONA to water are you using? And how long does it last before you have to add/replace the ona+water solution?

Wow, that was alot of questions...!

CoffeeH.... It's a bit noisy, but I don't think it's amplifier much by the bucket, I'm sure technically speaking it does, but it's not noticeable to me. Secondly it runs in the basement below the main living floor (I suppose that's the definition of a basement* lol) but I cannot hear it run unless the doorway is open or the laundry hatch, but still not that noticeable.

Decente - I do not run direct in the grow space. I've read that it can change the flavor of ur grow. So, I don't even chance it. Outside, anywhere in the basement. I had company stand 5' outside the door to the last grow I posted above, and they could not smell anything, NOTHING. (They were aware of the grow FYI).

I put a half cup ona, a bit of water. Couple cups worth, And (lol) I add a pack of gelatin to help it last longer. That amount there will last for a fees days to a week. i dont run 24/7, don't need too.

I have no other filtration system but intend to get one for peace of mind. I do pull air from outside the grow room (filtered) then exhausts into the rm). this keeps my temps perfect being in a cooler basement without having to spend $$ to do it right with controllers, etc.

I wouldn't say this is perfect by any standard, but it does work without a doubt. I'm pushing off my carbon filter purchase for a bit, just cause I know this does work, so it essentially buys me some time before another big expense.

Really nice of you to post this up bro.
Gr8 info here and thanks!

U
My Toadstool air deodorizer project for $20