Doctor to Open Pot Clinic in Kalamazoo to Help Patients

KALAMAZOO, MI – Dr. David Crocker has never given a recommendation for a patient to use medical marijuana to treat a debilitating condition.

But that will change Monday when Crocker is set to open Michigan Holistic Health – the first full-time medical marijuana clinic in Southwest Michigan – at 500 W. Crosstown Parkway, near the corner of South Westnedge Avenue, in Kalamazoo.

"I think we're going to be very busy, very fast," said Crocker, 44. "This is a service that is really lacking in this area."

A graduate of the University of South Florida's medical school, Crocker's most recent job was at the Veterans Administration's Sierra Nevada Health Care System in Reno, Nevada, where he served as an interventional radiologist.

A strong belief in the healing and treatment properties of marijuana brought him to Michigan six months ago to become a medical-marijuana patient caregiver and practice medicine on the side, he said.

He eventually became a caregiver, allowing him to help up to five patients grow their marijuana and take the drug.

But while talking to John Targowski, a Kalamazoo attorney, he was urged by the lawyer to open a medical-marijuana clinic. To operate such a clinic, a person must either be a medical doctor or a doctor of osteopathy, according to state law.

"I've wanted to do this for as long as I can remember," said Crocker, whose wife's family lives in the area. "You could say that everything has just fallen into place."

Few clinics
There are a handful of medical-marijuana clinics in the state.

One is in Jackson, another in Farmington Hills, a suburb of Detroit. Another clinic is the Hemp and Cannabis Foundation Clinic in Southfield, also near Detroit. It is one of several clinics the foundation operates in 11 states that have medical-marijuana laws.

Ricky G, who manages the Southfield clinic – which opened on Dec. 4, 2008, the day the medical-marijuana law took effect – said between 30 and 45 patients come into his clinic each day. About 60 percent are seeking a medical-marijuana recommendation to treat chronic pain, he said.

Two contracted physicians work for the clinic, seeing patients at the Southfield office as many as three days a week and crisscrossing the state on other days. The physicians will set up a mobile clinic in Kalamazoo on Feb. 25 to consult with those seeking to use medical marijuana.

Many doctors who are open to recommending marijuana to treat pain travel around the state, setting-up makeshift clinics in hotels to examine and consult with patients.

"It's a traveling road show, if you will," he said.

If the foot traffic at the Hemp and Cannabis Foundation Clinic in Southfield is any indication of the demand for medical marijuana, the Kalamazoo clinic is going to have plenty of business, he said.

"Demand is high and it's growing. There are a lot of people to see," he said. "Most of them are poor. They don't have a lot of money, but we're here to help them.

"I wish I had more physicians," he said.

How it works
People who come to Crocker's clinic in Kalamazoo will be asked to do the following:


-Provide their medical records.– If they don't have any medical records, a record of their condition or conditions would be started. For example, the person could keep a log of what hurts and the severity and frequency for a week or two.
-Fill out a medical-history questionnaire.
-Receive an examination. Crocker will answer any questions.
When the paperwork and examination are completed, Crocker will determine if the person qualifies to use medical marijuana. If they do, the clinic collects a $200 fee and helps the patient with paperwork that must be submitted to the Michigan Department of Community Health, which authorizes the required identification card indicating the person is a registered medical-marijuana user.

The clinic does not help a patient acquire their marijuana. If a patient doesn't qualify, there is no charge for the visit.

To obtain a recommendation, the state lists conditions that qualify a person to receive medical marijuana. They include chronic pain, glaucoma, cancer, AIDS/HIV, chronic muscle spasms, multiple sclerosis, seizures and migraine headaches, among other conditions.

The Michigan Department of Community Health is inundated with applications, receiving 79 per day on average, officials said. Currently, applications filed in November are under review.
As of Feb. 5, 16,028 applications for medical marijuana had been received and 8,395 were approved, along with 3,487 caregiver registrations. Some 2,663 applications have been denied, mostly because of paperwork errors.

The medical-marijuana law states that a copy of the application can be used as a temporary ID card if the applicant hasn't received their ID card or a rejection letter within 20 days of submitting their application. The state charges a $100 fee, reduced to $25 for low-income applicants, for the identification card.

Police: Avoid abuses
Capt. Joseph Taylor, commander of the Kalamazoo Valley Enforcement Team, which targets illegal drug use in Kalamazoo County, said he has no problem with Crocker's clinic as long as it's run "ethically and legally."

"I don't see it as being a problem for us," Taylor said. "I don't see it being an area of difficulty as long as it isn't run as a business that rubber-stamps (the recommendations) for people who might abuse it."

Michigan's medical-marijuana law was passed by voters in November 2008 and went into effect a month later. It allows registered patients to grow up to 12 marijuana plants and possess up to 2.5 ounces of usable marijuana.

Crocker said he knows that even though medical marijuana is legal to possess and use in the state by those with approval, pot is still a sensitive issue – especially for law enforcement.
"I'm going to do this tastefully," he said. "I'm not here to slap local law enforcement or the more conservative members of this community in the face.

"I'm not here to create tension or trouble. I'm here to help patients." 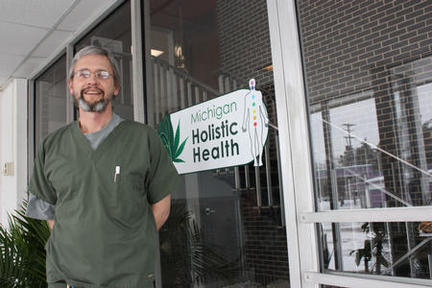