Doctors Will Have Little Say In Minnesota Medical Marijuana Program

Minnesota doctors are counting down the weeks to the launch of the state's medical marijuana program with the same mix of hope, curiosity or concern as many of their patients.

Unlike their patients though, doctors will be watching from the sidelines this summer. They won't write the prescriptions or decide how strong a dose of cannabis a patient will receive. In Minnesota, a doctor's only role is to confirm that a patient has a qualifying condition - a yes or no answer on a Health Department form - before they send their sickest patients off to try their luck with the newly legalized drug.

"Then they're out of the picture," said Dr. Gregory Plotnikoff, an internal medicine specialist at Abbott Northwestern Hospital in Minneapolis. "Someone else is then actually prescribing and adjusting the dose, and it's not a physician with clinical experience. ... It's literally a pharmacist following an algorithm."

While some doctors now are questioning that setup, when the Legislature was debating legalizing medical marijuana a year ago, that's what the majority of doctors wanted. The law was written to shield doctors from the possible legal consequences of prescribing a federally banned substance.

Although 24 states have legalized medical marijuana, the federal government still considers it a Schedule 1 controlled substance, with no recognized medical value. The federal ban has made it difficult for researchers in this country to gather hard scientific data about its medical uses and potential benefits.

"I think there's a lot of controversy on the drug for lots of different reasons," said Dr. David Thorson, a family practice physician in St. Paul and president-elect of the Minnesota Medical Association. Medical marijuana has "significant potential," he said, but right now "the science behind its benefit is not very strong; in most disease states, it's anecdotal at best."

The Minnesota Medical Association has scrambled to meet physician demand for information about medical cannabis, publishing papers, organizing forums and seminars and offering training to doctors and medical students that have attracted more than 100 participants in recent months. State law allows doctors to opt out of certifying a patient to participate in the program, and Thorson said his members seem to be divided between those who don't want to participate until they see hard evidence of the drug's effectiveness, those who think the drug has significant potential, and those who haven't yet made up their minds.

Even for skeptics, Thorson said, there is a keen awareness that the limited number of patients eligible to participate in Minnesota's program have debilitating, difficult-to-treat conditions, and some of the anecdotal evidence surrounding cannabis treatments has been encouraging.

Doctors ask themselves, " 'How do we help our patients survive these horrible things?' " Thorson said. "If I were a parent of a child with intractable seizures, that I've tried everything [to control], would I want to give my child a chance to try medical marijuana to see if that would control their seizures? How could you say no to that? At the same time ... the drug does have some risks associated with it."

Enrollment for the medical cannabis program begins June 1. The first retail locations will open in Minneapolis and Eagan on July 1, with six more locations to follow across the state.

In Cottage Grove, where half the state's medical marijuana crop is growing in LeafLine Labs' secure greenhouses to be refined into pills and liquids, plans are in place to keep doctors in the loop, if they want to be. Although there is no legal mechanism in place to let doctors monitor their patients' cannabis use, LeafLine will give patients a copy of their records to share with their physicians, if they choose.

"At the end of the day, this is simply a boring, safe and effective medication, delivered by responsible caregivers who want nothing but the best for Minnesota's patients," said LeafLine co-founder Dr. Andrew Bachman. Each of LeafLine's four clinics will be staffed by at least one trained pharmacist at all times – doctorate-level medical professionals who will dispense the drugs and walk patients through their questions about the medicine and its possible effects.

Bachman expects his company to spend a great deal of time on physician outreach.

"I see provider education and engagement as part of the obligation and responsibility of being a [cannabis] manufacturer in the state of Minnesota, as this is so new," Bachman said. "When you know what I know, you know this is the right solution ... solely with one mission, and that is to safely and responsibly care for a large portion of Minnesota's patients who right now are suffering and need care."

Minnesota doctors have watched from afar for years as patients with cancer, terminal illnesses or other serious conditions turned to pot dealers or pulled up stakes to move to states with established medical marijuana programs.

Plotnikoff remembers one patient - a young man with multiple sclerosis, who rolled out of his office in a wheelchair, bound for Colorado and its medical marijuana program.

The next time he saw that patient, he was walking.

"Is there hope? Absolutely," said Plotnikoff, whose practice focuses on "mystery patients" with complex diagnoses. But so far, he hasn't heard from many patients interested in enrolling with Minnesota's Office of Medical Cannabis.

The gap between state and federal marijuana laws raises questions about whether hospitals and nursing homes can dispense cannabis to their patients. State law says yes, federal law no.

"Providers have a lot of concerns," Thorson said. "It's going to be really hard to get much data in this murky environment, with so many variables. ... Just like any new process, there are going to be unintended consequences."

At Mercy Hospital in Coon Rapids, emergency department staff debated whether the new law meant they'd be dispensing cannabis to the patients coming through the door. Unlikely, concluded Dr. Thomas Wyatt, an emergency physician at Mercy Hospital and president of the Minnesota chapter of the American College of Emergency Physicians.

Given the lack of research and clinical trials, "some clinicians, some physicians are going to have a hard time with that," Wyatt said. "We're trained to be really evidence-based in our thinking when we're prescribing medications."

Despite the lack of research results, some groups are looking into the impact on states where medical marijuana is legal. A 2014 study by the Centers for Disease Control found that deaths from painkiller overdoses were 25 percent lower in states that have legalized medical marijuana. The Minnesota Health Department is debating whether to include pain patients in the state's medical cannabis program.

"If this drug is studied and shown to be just as effective or more effective than opiates, if there's a lower level of toxicity or mortality associated with it, why wouldn't we be looking into this?" Wyatt said. "Why not at least consider it?" 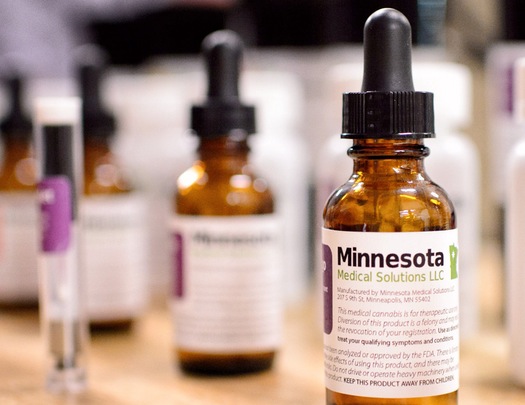