Does Medical Marijuana Have A Political Future In Alabama?

In Alabama, marijuana is a four-letter word.

"That is true," said state Rep. Patricia Todd, D-Birmingham. "But I can tell you in personal conversations I've had with legislators, they say something different than what they say publicly. I think many understand that marijuana can be used medically very successfully."

With the state getting encouraging early reports on the CBD trial at the University of Alabama at Birmingham — paved by the 2014's Carly's Law — the "medical" part of "medical marijuana" isn't the problem.

It's the "marijuana" part.

That word, lawmakers say, ignites a flurry of angst. Carly's Law became a reality in Alabama thanks to lobbying efforts by Alabama parents whose children suffer from seizures and might benefit from the plant's cannabidiol, or CBD oil. The Legislature rallied to the cause by passing the bill without dissent, dipping a toe into the pool of possible medical benefits from marijuana.

Carly's Law provides a structured CBD oil regiment for children suffering from certain types of seizures. Early results indicate the CBD oil has been effective in reducing the number of seizures the children endure.

For now, though, the momentum from Carly's Law appears to have stalled in Montgomery. Lawmakers moved on to other issues in 2015.

And in Alabama, marijuana remains both illegal and politically taboo.

"When you see the word marijuana, it's sort of like gambling in Alabama. The place goes crazy," said Mike Ball, R-Madison, one of the lawmakers at the forefront of the Carly's Law effort. "You get one side who sees a bunch of zombie-like potheads abusing marijuana — and there are people who do that — and some of these legal marijuana states have that problem.

"And you've got other people who see marijuana as this Holy Grail — this thing that fixes everything. Somewhere in the middle is common sense. When you have issues, you have to find a way for common sense to prevail."

It's a complex issue. Carly's Law is limited in scope, as it only sanctions a clinical study at UAB structured by the Food & Drug Administration and creates only 100 spots for participants. Carly's Law also expires in 2019.

Todd said she intends to sponsor a bill next year calling for the parameters of Carly's Law to be expanded to anyone to receive CBD oil as long as they have a doctor's prescription.

Todd said she may also revive a 2014 bill to reduce the penalties for possession of marijuana. Unlike Carly's Law, that 2014 bill on sentence reduction was dead on arrival. Todd said it might be the same in 2016.

"I don't think that will go anywhere," she said.

The early success of Carly's Law, however, might be a gateway to expand access to CBD oil in Alabama, Todd said.

"I think it will," she said. "We've had these clinical trials from UAB that have been so successful. We now know this is a very effective medicine to treat seizure disorders. I don't think there will be a lot of pushback on it because we have now proved how effective it is. It would still require a doctor's prescription."

But the best pathway to change, Ball said, goes through Washington. However, just like state legislators, members of Congress face re-election.Ball's original Carly's Law bill last year called for decriminalizing possession of CBD oil — which contains none of the high-inducing elements in marijuana.

"I'm afraid when the word marijuana gets in Congress, they probably act like legislatures do — everything goes crazy," Ball said.

Alabama's congressional delegation has even effectively voted against Carly's Law, which sailed through the state Legislature.

In a 2014 vote in the U.S. House of Representatives, Alabama's delegation voted 4-3 against an amendment that would leave the medical marijuana legalization laws in 22 states — including Alabama — undisturbed. That amendment, attached to a funding bill that included the Drug Enforcement Agency, passed the House but died in the U.S. Senate.

Yet the vote provides a snapshot of the politically charged debate still surrounding marijuana.

"There are still a lot of people that I believe could benefit from the CBD oil," Ball said. "But the fear of marijuana keeps them from getting that." 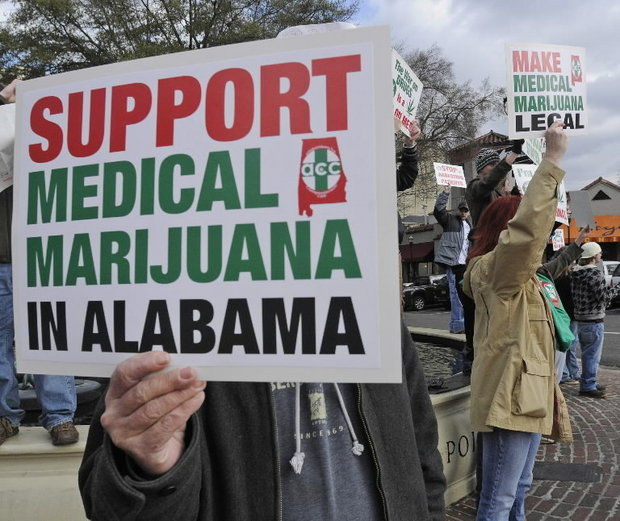