Ever hear of a food bank turning down food? It happened yesterday -- because donations intended for Denver's Metro CareRing were part of a pot-for-food drive organized by Urban Cannabis, a South Downing Street medical marijuana dispensary. Urban Cannabis sales director Amy DiIullo is still trying to wrap her head around this surprising turn of events.

"We all recognize there are needs," DiIullo says. "We live in Denver, and we see homeless people on corners or people who need food or assistance. So we know food pantries need food, and if we didn't have cannabis in our name -- if we were just Urban Center, not Urban Cannabis -- I'm sure it would be okay." She adds, "I don't think cannabis is a dirty word, but apparently some people still do."

The story began when the folks at Urban Cannabis created a food drive dubbed "Cans for Cones." The concept: From March 1 until April 20 (a date not chosen by coincidence), MMJ patients who donated four cans of food would receive a pre-rolled joint for their largesse. The goal? Collecting 2,000 pounds of canned food -- meaning between 2,000 and 4,000 cans -- by 4/20.

Urban Cannabis arranged with Metro CareRing and A Community Taking a Stand, better known as ACTS, to accept the donations, then sent out a press release noting that the dispensary was "partnering" with the two pantries. This same term was used in a March 19 Denver Post article about the drive.

And that's when the trouble started.

"Metro CareRing called me around 4 p.m. yesterday," DiIullo recalls. "My contact was one of their directors, and they apparently had received copious amounts of calls from faith groups and other conservative groups that donate to their organization voicing strong complaints that they were listed in the paper with a dispensary."

The word "partnering" was the flash point. Indeed, DiIullo shares a statement sent via e-mail by Metro CareRing stressing that "by definition, [it] is erroneous to state that a 'partnership' has been entered into or created between Urban Cannabis, a marijuana dispensary, and Metro CareRing." But DiIullo feels the problems ran deeper.

"As we spoke further," she says, "I realized it wasn't just the word. It was the fact that they no longer wanted their name associated with Urban Cannabis in any publication whatsoever." And that meant rejecting the donations, none of which had been delivered at that point; DiIullo says she was about to arrange a drop-off when the call came.

The conversation depressed DiIullo -- but shortly thereafter, a more positive development gave her a much-needed boost.

"Someone from a Christian, faith-based organization came in and gave us 100 pounds of potatoes and fifty pounds of oranges," she reveals.

Yes, he also brought in four cans -- and because he was a medical marijuana patient, he was rewarded with "as much as we could give him without going over the compliance-standard limits set up by the state." She calls his gift "Christian charity at its finest."

The potatoes and oranges, along with approximately 500 cans collected to date, are headed to ACTS, which has raised no objections about the program with DiIullo. And she's hopeful that the pantry will receive lots more food by the end of the drive.

In the meantime, she insists that she's not upset at Metro CareRing, whose director was pleased that ACTS will be able to put the donations to good use. "It's not them," she says. "They want the food. But the people affiliated with them maybe aren't aware of certain things about medical cannabis." 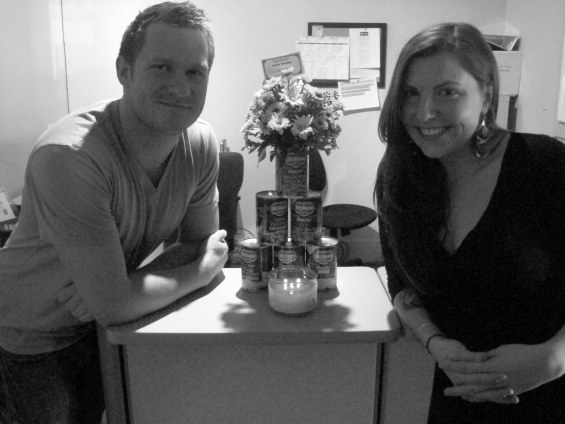 Urban Cannabis business manager Dave Crook and sales director Amy DiIullo with some of the donations. 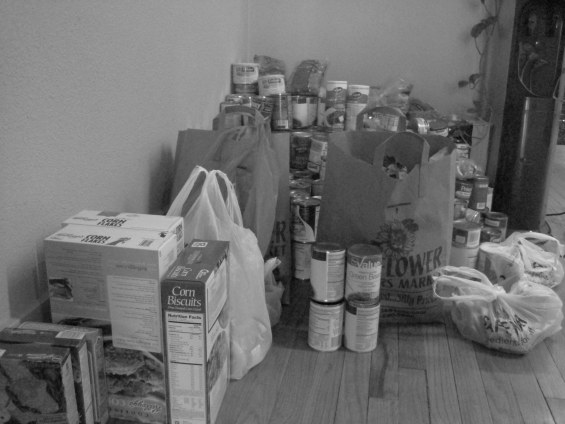 More of the donations Urban Cannabis has collected to date.​

Seems I remember the bible saying that its ok to eat food thats been offered to idols but I guess Cannabis users sharing food with hungry people isn't. I also remember the bible saying that its not what goes into the man that defiles him but what comes out of his mouth. These so called christlike people have defiled themselves. Jesus must be so proud of them. I guess gawd made a mistake when he created Cannabis. Hypocrites!
420 Magazine - Your Best Choice For Cannabis News

This is just insane. I mean, it's not like the care center is opening the cans of food and inserting cannabis into it!
I can't believe that a food center in need of food would turn away said food. I bet the people that need that food don't give a tick where it came from.
In the bible Paul was offered a bunch of food on a sheet, and it contained all kinds of foods he thought he was not able to eat. Creator said, eat it all, it's all good for you.
These people need to wake up and smell the cannabis. It was created by the Creator and it's here to stay, and no amount of self righteous piety is going to stop it.
420 Magazine
Creating Cannabis Awareness Since 1993
https://www.420magazine.com
G

I know that I'm not supposed to bring up religion, but, here is what the Lord say's regarding cannabis and his Christ.

In 1936 a Polish Anthropologist named Sula Benet discovered that in the original Hebrew text of the Old Testament the word "kaneh bosm"(קְנֵה-בֹשֶׂם) was translated as "calamus" or fragrant cane by the Greeks when they first rendered the Books in the 3rd century B.C., then propagated as such in all future translations from the original Greek without review, including Martin Luthers. During that same time period Hebrew slowly ceased to be used as a spoken language. It wasn't until the late 1800's that a man named Eliezer Ben-Yehuda revived it once again. Benet concluded through years of substantial research and etymological comparison that the correct translation of "kaneh bosm" should be "cannabis." In 1980 the Hebrew Institute of Jerusalem confirmed her claim that indeed "kaneh bosm" is cannabis. Ben-Yehuda's 1964 Hebrew-English dictionary confirms this fact, page 140. The Biblical “Canon,” from the Greek “Kanon,” meaning; "to measure, to rule, straight, upright," is also derived from the Hebrew word "kaneh"(קְנֵה). In fact we now know that all early religions used cannabis and, or, other psychotropic plants as sacraments. Calamus was used by ancient peoples and still today as an aphrodisiac and stimulant, its active chemical asarone is a precursor to the psychedelic MDMA, ecstasy.

Benet traced the use of cannabis back to a group of early nomadic peoples called the Scythians whom the Greek historian Herodotus observed in the 5th century B.C., after funerals, throwing cannabis buds on hot stones, inhaling the vapors, and howling with joy. She goes on to say; “Since the history of cannabis has been tied to the history of the Scythians, it is of interest to establish their appearance in the Near East. Again, the Old Testament provides information testifying to their greater antiquity than has been previously assumed. The Scythians participated in both trade and wars alongside the ancient Semites for at least one millennium before Herodotus encountered them in the fifth century B.C. The reason for confusion and the relative obscurity of the role played by the Scythians in world history is explained by the fact that they were known to the Greeks as Scythians but to the Semites as Ashkenaz. Identification of the Scythian-Ashkenaz as a single people is convincingly made by Ellis H. Minns (1965) in his definitive work on Scythians and Greeks. The earliest reference to the Ashkenaz people appears in the Bible in Genesis 10: 3, where Ashkenaz, their progenitor, is named as the son of Gomer.

In Exodus 30:23 GOD instructs Moses to use 250 shekels of "kaneh bosm" in the oil for anointing all Priests, and later Kings and Prophets, for all generations to come, including that of Jesus and even today as the title Christ/Messiah means literally; "covered in oil, Anointed." "Kaneh" is also listed as an incense tree in Song of Songs 4:14. The error was repeated in Isaiah 43:24, Jeremiah 6:20, and Ezekiel 27:19, where "kaneh, kaneh bosm" are translated as calamus or sweet cane. There are 141 references to the anointing and 145 to burning incense in the standard Bible.

Much has been learned regarding the role of cannabis and human development since Benet discovered the error over seventy years ago, and with these revelations along with the discovery of the Dead Sea Scrolls, Nag Hammadi Library, certain Apocrypha, and a closer examination of the Bible, we find that in order to be called worthy of the title "Christian" one has to be anointed with the very Holy Oil as described in the original Hebrew text of Exodus. Johns water baptism is incomplete and any other oil counterfeit. Jesus came to free the restricted Holy Oil and make Anointed Priests of all men with ears to hear his message, baptizing with fire and the Holy Spirit, the “Chrism.” The Anointing is symbolic of being baptized in the “Holy Spirit.” It is synonymous with the Laying on of hands and also called the Seal, Unction, Advocate, and Counselor. It is "the Way." Under the old covenant Priests were ordained to stand between God and the people, Jesus died so that all believers could become Anointed Priests before the Lord. A chosen people, a royal Priesthood, a Holy nation. Ex 40:12-16, 1 Peter 2:4-10, Rev 1:6, 5:10, 20:6

Cyril of Jerusalem;
For as Christ after His Baptism, and the visitation of the Holy Ghost, went forth and vanquished the adversary, so likewise ye, after Holy Baptism and the Mystical Chrism, having put on the whole armour of the Holy Ghost, are to stand against the power of the adversary, and vanquish it, saying, I can do all things through Christ which strengtheneth me.
“Having been counted worthy of this Holy Chrism, ye are called Christians, verifying the name also by your new birth. For before you were deemed worthy of this grace, ye had properly no right to this title, but were advancing on your way towards being Christians.”-
Having been anointed, therefore, with this holy ointment, keep it unspotted and unblemished in you, pressing forward by good works, and being made well-pleasing to the Captain of your salvation, Christ Jesus, to whom be glory for ever and ever. Amen.

Sorry, I hope the Truth doesn't offend anyone.

I know that I'm not supposed to bring up religion...
Click to expand...


Its all about context. In the context of this thread your points are valid.
420 Magazine - Your Best Choice For Cannabis News