A medical marijuana dispensary has asked a federal judge not to let its landlord stop the business amid federal forfeiture proceedings.

The U.S. Attorney's Office accused Harborside Health Center's two dispensary locations in San Jose and Oakland of selling marijuana in violation of the Controlled Substances Act (CSA) in July. While medical marijuana is legal in California, it is still illegal under federal law. The dispensary was featured on the television show "Weed Wars."

Concourse Business Center, which owns the land leased for the San Jose location, asked the Northern District of California last month to enjoin Harborside from growing, possessing and selling marijuana on its property. The U.S. government joined the request for injunctive relief against the dispensary.

Concourse claims it "mistakenly believed that one could lawfully operate a medical cannabis dispensary in the state of California" when it granted and then renewed Harborside's lease.

The company served Harborside a 30-day notice to stop growing and selling marijuana at the property a week after learning about the forfeiture actions. It also recently filed an unlawful-detainer action against the dispensary in Santa Clara County Superior Court.

But Harborside says Concourse Business Center does not have standing as a private party to enforce the Controlled Substances Act.

The dispensary's Sept. 12 motion cites multiple federal cases to show that "federal courts that have examined this issue have overwhelmingly found that private parties lack any standing whatsoever to enforce the CSA."

Harborside accused the property owner of making a "naked attempt by a private party to enforce the CSA, a power that is left solely to the executive branch."

The dispensary also points out that Concourse "had notice through the lease itself of the acts that it now contends violated the CSA."

"This constitutes and (sic) additional powerful reason that issuing the requested injunction would be both procedurally improper and entirely inequitable," it added.

The dispensary also argued that shutting down its operation by granting the requested injunction would "effectively give the government the victory it seeks (via a backdoor route through the landlord no less) without it going through the orderly process of litigating the action it chose to file."

Harborside says it is ready to defend itself in the forfeiture proceedings.

Moreover, the government and Concourse Business Center made "no showing whatsoever" that "irreparable harm" would occur if the parties litigated the forfeiture action to its conclusion, the brief states (emphasis in original).

Harborside says courts can grant preliminary injunctions only after the moving party shows the likelihood of irreparable harm. Here, the parties argue only that the CSA has been violated, according to the motion.

But the irreparable harm for Harborside is tangible, the dispensary claims. If enjoined from selling medical marijuana, Harborside says it would have to lay off 20 San Jose employees, cutting them off from salaries and full medical benefits. Harborside's primary reason for existence would also be lost, according to the motion.

The dispensary wants the court to deny the injunction and let the forfeiture cases proceed on the merits. In the alternative, if the court finds that Concourse's evidence supports the injunction request, Harborside wants a new briefing schedule and hearing date to rebut the evidence.

The recent crackdown on medical marijuana dispensaries in California focused on dispensaries that were allegedly near schools, parks and playgrounds.

Harborside maintains that it has complied with all local and state laws, and that it was not within 1,000 feet of a school.

Americans for Safe Access, an advocate for medical marijuana, says that the Justice Department uses this rationale to target dispensaries, even though state law is set at 600 feet.

More than 400 dispensaries have shuttered in California since federal prosecutors announced a crackdown against them in October 2011, "mostly from the specter of federal criminal prosecution or asset forfeiture," according to the group.

Harborside said in a statement on its website that the clinic "has nothing to be ashamed of" and will fight eviction "with every legal means at our disposal." 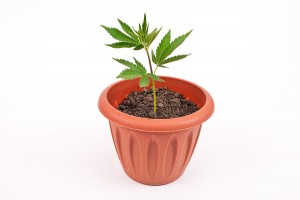