Detectives boasted about the giant drugs bust and even posed for pictures.

But as two police community support officers guarded the front of the cannabis factory, thieves broke in at the back.

A neighbour rang the police – but by then an estimated Â£15,000 of cannabis plants had been taken. Police yesterday confirmed they have launched an internal investigation into the blunder. An insider said: “There was such a lot of cannabis we had to bring in council experts to dispose of it. While we were waiting, the thieves broke in.

“There should have been a team of officers to guard the building. There are a few red faces around.”

The sophisticated drugs farm was found by chance in a former nightclub in Merthyr Tydfil, south Wales.

Four Vietnamese men, aged 17 to 48, are in custody awaiting trial on charges of producing cannabis. 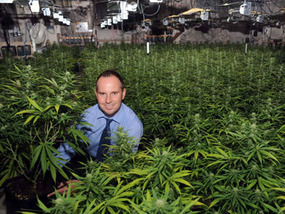 So with out the evidence are they still able to press charges? I know that they may have photo's but, those could have been taken anywhere, right? I don't know how the law works there, but possession is 9/10th of the law here and with out it where would they stand?
Lady Leeann

Were talking about Cannabis which has it's own laws and perceptions.
Believe nothing that you hear and only half of what you see.

If I never got busted: I could have been president. Instead I'm just an ordinary crimminal!!)
P

Cops are the posers I see with the plants, but
Truth and facts haven't yet played a part. Why start?
420 Magazine®
Creating Cannabis Awareness Since 1993