California - In two weeks, Lake County voters will decide if they want to loosen up, or even eliminate, the restrictive medical marijuana ordinance (pdf) they passed in June. For now, the county sheriff will have to stop enforcing that ordinance illegally–by seizing, without a warrant, marijuana being grown on private property. Sheriff's deputies allegedly raided the homes of several medical marijuana patients in August without a warrant, seizing their plants.

The ordinance states that law enforcement officers who want to abate an "unlawful marijuana cultivation" five days after issuing a warning "may apply to a court of competent jurisdiction for a warrant authorizing entry upon the property for purposes of undertaking the work, if necessary." U.S. District Judge Thelton Henderson said it was necessary and issued an injunction blocking the county from conducting the raids. The judge was responding to a complaint brought by the marijuana patients and the state chapter of the National Organization for the Reform of Marijuana Laws (NORML). They sued the sheriff's department and California's Department of Fish and Wildlife.

Judge Henderson did not buy the county's argument that the three-year drought, which has been particularly hard on poverty-stricken Lake County up near Mendocino, constituted an emergency that warranted not seeking a warrant. Marijuana needs a lot of water. The judge wrote in his October 14 decision, "The need to reduce water use, even during a drought, falls below the level of urgency associated with emergencies justifying a warrantless search in existing case law."

The "utterly unpersuaded" Judge Henderson was also not impressed with the county's argument that it shouldn't be compelled to obtain warrants because it hadn't established a process for doing that in these cases, according to the Courthouse News Service. "The county's inexperience in obtaining warrants before conducting a search and seizure does not excuse the requirements of the United States Constitution," he wrote. Lake County has been roiled by the medical marijuana issue for awhile, as the changing state environment for smoking pot evolves. Longtime residents complain that newcomers, and changing behavior of old-timers, is further devastating communities that weren't doing too well to begin with.

"It's not the marijuana, it's the culture that comes with it," bail bondsman, buffalo rancher, bounty hunter and high school wrestling coach Rob Brown told Joe Mozingo of the Los Angeles Times. "It's the culture of 20- and 30-somethings that want to come up here because they're too damn lazy to work. They want to smoke their weed and make their money and not have to work."

That's the outsiders. Then there's the locals. Brown explained: "There used to be the day you'd have the weed people and you had the speed people. Not any more. The lines have blurred. They're selling weed to buy speed. And they're doing speed to stay up all night and guard their weed."

The state, which has legalized medical marijuana and dispensaries, gave localities the option of restricting the growing and selling. Lake County supervisors passed one of the most restrictive ordinances in the state last year, making it virtually impossible for individual users to grow their own pot outdoors. Indoor restrictions are lighter, but growing inside is more complicated and more costly.

Medical marijuana advocates gathered enough signatures for a referendum on the law, so the board withdrew its ordinance and put its restatement, Measure N, on the June ballot. It passed 51.7% to 48.3%. In response to the ordinance, two rival measures picked up enough signatures to earn spots on the November 4 ballot. Measure O (pdf) would allow 48 plants on a residential 5-acre parcel and is meant by its advocates to offer a compromise on the issue. Fees would be charged on any parcel with more than 12 plants. Measure P (pdf) does not seek to compromise. The "Freedom to Garden Human Rights Restoration Act of 2014" doesn't mention marijuana and declares, "Human beings are naturally endowed with the fundamental self-evident right to have and grow the natural plants of this earth." 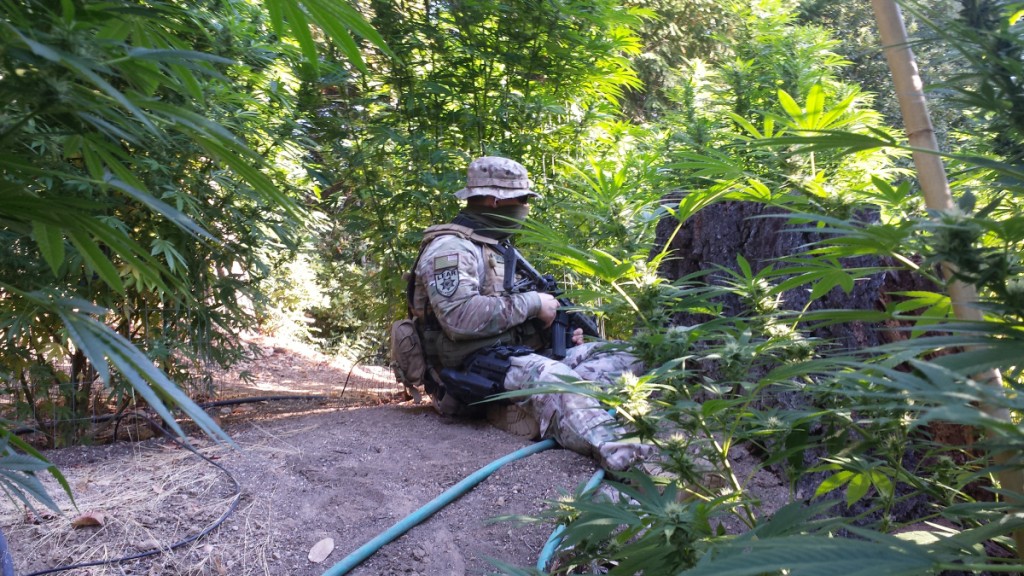 What is the connection between this article and a LEAR Asset Management thug with a semi-automatic rifle?
Radogast

Radogast said:
What is the connection between this article and a LEAR Asset Management thug with a semi-automatic rifle?
Click to expand...


He appears to be safeguarding a crop. All I know is if I walked up him and he pointed that gun at me for no reason I would be pissed off. It's not even safe to walk into a forest anymore, what a shame.
My first journal, Power Flower - Feminized soil grow. Completed

Tbob does Flowering Clones in Soil and Hydro 2014 Completed