Duo Moves From Mortgage Crisis To The Capital Cannabis Crown

Sacramento - A little more than two years ago, Nick Street and Sonny Kumar were crashing from a decidedly non-medicinal high.

The two men were financial officers working for separate firms when the mortgage meltdown hit. Their livelihoods sank with the collapsing economy.

But now the men are winning honors for their latest venture - as leading entrepreneurs in the Sacramento cannabis industry.

Their El Camino Wellness center, opened in September, 2008, was selected as the Sacramento Cannabis "Club of the Year" based on medical pot users' reviews in 2009. The award was given out by sacramentocannabis.com, an on-line consumers' guide to pot clubs in the capital city.

Along with its "Club of the Year" medallion, the Wellness Center lists an on-line description of its "beautiful Zen garden and waterfalls" and entices would-be clients "to relax in this safe and caring environment."

Tucked behind a used car lot in an industrial area, the place operates with tight security. Some three guards will greet you, and check identification and doctors' referrals, before you walk in.

Once inside, a multi-colored electronic sign board flashes names and prices of dozens of marijuana varieties. Bud tenders weigh and package thick stashes of California-grown pot. Kumar says the product passes muster at an Oakland cannabis laboratory before it is accepted at the dispensary.

The dispensary's published on-line patient reviews include five-star ratings from "Bobby V.," who wrote, "Great meds, great staff, great place. My number 1" and from "Harry M." who wrote, "I got some fire Ingrid, that is cheaper than I saw at another club, and some crazy Platinum OG."

But there are also a few dissatisfied customers. "Chris R" begrudgingly gave the establishment a single star. He wrote: "I wish I could give them zero stars...Their meds are low-grade at A+++ prices."

Even for the reigning capital cannabis king, it's a tough audience out there. 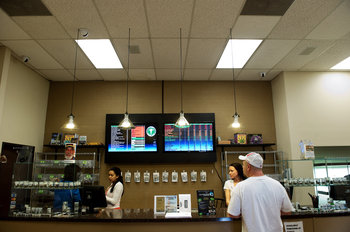 Duo Moves From Mortgage Crisis To The Capital Cannabis Crown

The Capital Of Cannabis?