Early Attempts To Isolate The Active Ingredient/s Of Cannabis Sativa

This interesting read came from The Antique Canabis book.

25.1 - EARLY ATTEMPTS TO ISOLATE THE ACTIVE INGREDIENT/S OF CANNABIS SATIVA:

Throughout the 19th Century and well into the mid-20th Century, chemists, physicians and pharmacists made numerous attempts to locate or isolate the actual active ingredient(s) of Cannabis. And while many of these early attempts are noteworthy, especially given the technology at the time, they now are the cause of much confusion. Take for example the following, according to the DEA [1]

"The Cannabis plant contains several alkaloids; the principle ones being, Cannabinol, Cannabidiol and the Tetrahydrocannabisnols. "

To which the average person and even the most knowledgeable of Antique Cannabis Collectors will go -- Huh???

Yet as collectors we all best get used to such fandangle words [all of them coming from early attempts to isolate the active ingredients], especially Cannabinon and Cannabin, because these two products would play a somewhat key role in Cannabis medical history. In fact, both of these medicines seemed to have stayed on the market, even after the passage of the Marihuana Tax Act, and into the early 1940's. 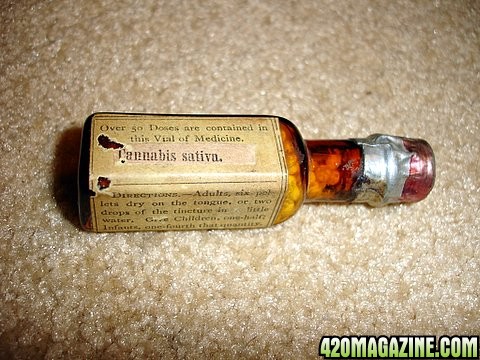 The following, taken directly from an article in the "The Indian Medical Gazette" [1884], provides a good introduction into the subject:


THE ACTIVE PRINCIPLE OF INDIAN HEMP.
BY SURGEONS WARDEN AND WADDELL.
Bengal Medical Service.
One of the most serious drawbacks to the medicinal use of this powerful drug (Cannabis Indica) is that we cannot depend upon its preparations being possessed of activity; moreover, the large amount of resin in each dose is often productive of gastric disturbance. These objections would at once be overcome were we able to extract from the resin its active principle.

Since 1839, when Sir W. O'Shaughnessy of Calcutta brought the peculiar properties of Indian Hemp prominently to the notice of the medical world, several attempts have been made to isolate the active principle of the plant with remarkably conflicting results.

In 1846 Smith separated a resin which he called 'Cannabin', and which he believed to be the active principle; and said that it possessed much narcotic activity. No subsequent observers, however, have been able to obtain, by the process employed by Smith, any body which fully answers to the description of Smith's 'Cannabin.

In 1857 Personne resolved the volatile oil, obtained by distillation of the plant, with water, into Cannabene (C18H20) a light hydrocarbon, and a Solid crystalline hydride of cannabene (C18H22). He states that inhalation of the vapour of cannabene produces a powerful physiological effect, and he claims it as being the sole active principle of Indian hemp.

In 1876 Preobraschensky, operating on 'hashish' got from Turkestan, asserted that the active principle was not a resin, but an alkaloidal body, which he recognised as Nicotine, the volatile liquid alkaloid of tobacco. It has been suggested that the presence of nicotine might be due to the hemp having been mixed, as it sometimes is in the bazaars, with tobacco, but Preobraschensky states that he obtained this nicotine from the flowering tops of the plants as well as from the commercial resin.

Merck of Darmstadt applies the term Cannabin tannin to a glucoside contained in Indian hemp which he has combined with tannin. This preparation is not possessed of powerful activity, and frequently is inactive. By treating this tannin compound with zinc oxide, Herr Bombelon obtained a substance which he named Cannabinum, as a greenish brown powder not agglutinating upon exposure to the air and volatilizing without residence on platinum foil.

In 1881 Siebold and Bradbury reported to the British Pharmaceutical Conference that Indian hemp does contain a volatile alkaloid which, however, does not possess the characters of nicotine. They called it Cannabinine, and obtained only 2 grains from 10 pounds of hemp. They do not appear to have tested its action physiologically, and so have left it undetermined whether this volatile alkaloid be really the narcotic principle of hemp.

The above chemists thus obtained widely different bodies, yet each individually believed that the substance which he isolated represented the active principle of the drug. With the subject thus involved, and having at hand a supply of fresh and active hemp, we undertook an examination of the plant in the endeavour to isolate its active principle. Since commencing our observations. Dr. Matthew Hay his reported that he has isolated an alkaloid in the form of colorless needlelike crystals, which, however, did not possess the narcotic properties of the plant, but produced tetanus in frogs in exactly the same manner as strychnine---though not chemically identical with it. Dr. Hay therefore called this alkaloid tetano-cannabin. It must exist in the plant in exceedingly minute traces, for only a few grains were obtained from 1 kilogramme of hemp. He considers it a secondary alkaloid of the plant, and not the chief active principle. We have specially investigated this point as to whether the plant contains an alkaloid with tetanizing properties. . . ---THE INDIAN MEDICAL GAZETTE - Sept. 1884 pp 259

As can be seen, many were the attempts to isolate active medical ingredients, as were the names attached to such attempts. Thus perhaps some definitions are in order:

The following are Cannabis related substances that while [referencing here ONLY to Western Medicine] could have been used as medicines, in general they weren't and thus can safely be ignored by the antique collector. All definitions are per "Potter's Therapeutics Materia Medica and Pharmacy" [1917].

# CHURRUS
Churrus is an impure resin, prepared by rubbing the leaves of the plant together and scraping off the adhering resin.

# HASHISH, BHANG, SIDDHI
Hashish, Bhang or Siddhi is a confection consisting of the leaves and small stalks coarsely broken and mixed with Poppy seed, Ginger, Pepper, etc., boiled together. In the East Cannabis is invariably used in mixture with Opium and Hyoscyamus and most of its deleterious effects are believed to be due to these constituents. [Note SIDDHI was/is in use by Indian Medical Doctors, but it has no history of medical use by Western Medicine]
SOME OF THE EARLY PRODUCTS:
Remembering that Cannabis itself is technical nothing more than --"the dried flowering tops of the female plant of Cannabis sativa". And once again, that the attempts to isolate the active medical ingredients were many. The following are those few substances that (at least in the author's opinion) antique collectors should become aware of:

# CANNABIN
"Cannabis contains a resin named Cannabin" This resin was thought to contain the active properties of Cannabis and was sometimes sold in table form. --Potter's Therapeutics Materia Medica and Pharmacy [1917]

# CANNABIN TANNATE [SEE MORE]
This glucoside combined with tannic acid was introduced by E. Merck. Attempts have been made to place upon the market a so-called "cannabin," which is nothing more than a purified extract of cannabis indica. Cannabin tannate acts as a mild and pleasant hypnotic, and is especially used in cases where morphine is objectionable. It has been claimed to have produced a gentle sleep when opium had failed completely. the dose varies from 0.2 to 1.0 gram. ---Pharmaceutical Record 1886 Vol.6, pp 152

# CANNABINOL
Cannabinol is a toxic red oily substance, C18H24O2, isolated by Wood, Spivey, and Esterfield from Indian hemp. It was examined physiologically by Marshall. The original chemical communications appeared in the May number of the Journ. chem Soc., for 1896, p.545. A preliminary physiological report was made in the same journal, a more detailed report was to be made elsewhere. ---Pharmaceutical Review -- 1897 - Vol. 15 - pp37

# CANNABINE
Cannabis indica. (Alkaloid from the drug.) Properties: A brown, syrupy liquid, recommended as a hypnotic in doses from 1 to 5 grains daily. The tannate is a yellowish brown powder, insoluble in water or ether, slightly soluble in alcohol, freely soluble in water rendered slightly alkaline. In a dose of 2 to 10 grains (average 4 ) it has been spoken of as a useful hypnotic, especialy in nervous sleeplessness and acute mania; it is free from unpleasant secondary effects. ---Pharmaceutical Record March 24, 1892 pp 189

# CANNABINONE
Cannabis indica. (A constituent of the flowering tops.) Properties: A balsamic, resinous body, insoluble in water, but taken up by alcohol, ether, chloreoform and benzol, as well as by fatty and essential oils. It has a hypnotic action in doses of 1/2 to 1 1/2 grains; the taste, which is far from agreeable, may be disguised by the addition of powdered coffee. ---Pharmaceutical Record March 24, 1892 pp 189

# CANNABININE
Cannabinine In I857 Personne resolved the volatile oil, obtained by distillation of the plant, with water, into Cannabene (C18H20) a light hydrocarbon, and a Solid crystalline hydride of cannabene (C18H22). He states that inhalation of the vapour of cannabene produces a powerful physiological effect, and he claims it as being the sole active principle of Indian hemp. ---INDIAN MEDICAL GAZETTE 1884, pp 259

# CANNABINON.
Recently another preparation of cannabis indica, bearing the above name has been brought into commerce. At a low temperature it is of the consistency of a solid extract, while at a higher degree of temperature it is in the form of a thick, brown liquid. It possesses a strong aromatic odor and a bitter, some what acrid taste. It is insoluble in water, readily soluble in alcohol, ether, chloroform, benzol, petroleum ether, bisulphide carbon, and in both the etheral and fixed oils. In a weak solution it presents a golden yellow color; in a strong solution it is changed to a dark brown. Heated upon platinum foil it does not leave a residue.

According to the most recent investigations made by eminent physicians and physiologists it has been found that in doses of 0.05 to 0.1 gram, it produces a quieting and refreshing sleep without the appearance of any disagreeable after-effects on the following morning.

# HASCHISCH PURUM AND CANNABINON.
This is a preparation of cannabis indica prepared by treating the alcoholic extract of Indian hemp and caustic alkali, by which all acid ingredients are solved (Pharmaceutical Journal). The brown soft resinoid residue in "pure haschisch," and is composed of the soft resin cannabinon and the alkaloid tetanine. It is insoluble in water, but forms golden-yellow solutions in alcohol, either, and chloroform. A third of a grain is said to act as a cerebral stimulant, and a larger dose causes all the symptoms, including sleep, of Indian hemp. The drug should be a fine state of division, and may be given in pastile form, with powdered cacao or roasted coffee as a vehicle. tannic acid dissolves out the alkaloid on which the stimulant action depends, whilst the remaining cannabinon has the narcotic property. Cannabinon is triturated with sugar of milk in the strength of 10 per cent. Made up with cocoa or coffee in pastile form, it may be given as a hypnotic, in doses of one half to one grain and a half, especially for hysterical or insane patients, but it is contra-indicated when heart-disease exists. ---Medical and Surgical Reporter April 2, 1887 pp441
25.2 - NO NAME DRUGS:
Normally this museum deals ONLY with established "Brand" or "Trade" name drugs, manufactured exclusively by established pharmaceutical corporations of their day: And not without good reason. While we have been able to document (approximately) one thousand pre-1937 Cannabis medicines, [and here it should be noted that between 3 to 6% of all medicines sold in the U.S. at one time contained Cannabis[2] ]. By far the very vast majority of all cannabis medicines (as were all other medicines for that matter) were of the home brewed type. [See chapter 5] Thus, one can easily see how the list of Cannabis Medicines can very literally be thought of as infinite.

Which explains why we only document Cannabis medicines if they originated from an established company etc., and had a specific Trade or Brand name association. However, from time to time, there comes along a weird oddball product that for whatever reason is of historical significant and simply can't be ignored.
Last edited: Jan 22, 2008

The Marketing of "Cannabis Americana"

The Physiological Activity of Cannabis Sativa