If the Parliament of Georgia legislates marijuana consumption, distribution and cultivation to be legal, the extent of the local market will be increased by over GEL 1.3 billion in 2018. At least 2 million tourists will visit Georgia in 2018, resulting in increased incomes of GEL 570 million.

The overall marijuana market will be worth GEL 2.7 billion, creating about 53,750 new jobs; tax revenues from marijuana will be up to GEL 1.3 billion. Considering that marijuana is not legal in any of the top ten home countries of the tourists who spend the highest amounts of money in Georgia, essential benefits can be gained from its legalization. In addition, NIDA mentions only a single record of a fatal cannabis overdose in the U.S. Thus, increased tourist income, tax revenues, reduced crime rate and people's "unalienable rights" of "life, liberty and the pursuit of happiness" should lead politicians to make the rational decision to legalize marijuana in Georgia.

Not only the legalization of marijuana, but even decriminalization was a point of cutthroat discussion in Georgia before now. Since November 2016, political party Girchi has led the major drive to decriminalize marijuana. On 30 November, 2017, the Constitutional Court of Georgia ruled the use of marijuana to not be considered a crime. Now it is the turn of the Parliament of Georgia to pass the decision into law.

Representatives of Girchi state that based on the decision of the Constitutional Court, not only its decriminalization, but also its legalization, is soon expected for both medical and recreational purposes.

Decriminalization without legalization might boost the black market of marijuana, meaning increased bootlegging due to higher demand and increased prices, which also encourages secondary crimes like robbery. "Decriminalization might cause illegal activities to increase and it should be an additional incentive for the Government to legalize it. However, decriminalization will create an incentive for people to plant and sell more marijuana and prices might even drop down due to higher supply," said Zurab Japaridze, Head of political party Girchi.

Regarding the incentives of the Government to legalize marijuana, Japaridze told The FINANCIAL: "Legalization will abolish the black market and make it easier to control the supply of marijuana. In order to increase sales and number of customers, the majority of illegal suppliers will move to the legal market. Few people will operate in the black market but it's more likely to be less profitable for them, compared to the legal market. Since the market will be under control, regulations within the legislation will protect children from marijuana consumption. The second incentive is money that could be gained from marijuana taxes. Legislation will solve the budgeted deficit and will accelerate economic growth."

Girchi considers that regulations that usually follow legalization will lead the marijuana market in Georgia to be safer for people. "We are considering a few regulations in the event of legalization. These are: licenses for the manufacturing, distribution and trade of marijuana; special marking and minimum age for consumption. And also, taxability, which will decrease the affordability of marijuana," said Japaridze.

Girchi disclaims that marijuana legalization for recreational use will result in an improvement in health-related issues caused by excessive marijuana ingestion; "Marijuana will solve many medical problems, such as overdoses from high potency drugs. Consumption will probably increase, but so will the safety of marijuana," said Japaridze.

As for economic benefits, economists consider the potential for an increase in: tourist income, tax revenues and employment rate.

"If at least 2 million tourists visit Georgia in 2018, marijuana legalization will increase the extent of the local market by GEL 1,318,000,000 and the market for tourists by GEL 570,000,000. The whole new economy created by marijuana legalization will be worth GEL 2,687,000,000, generating about 53,750 new jobs. In addition, taking the taxation model of the state of Colorado, tax revenue from the marijuana market will be about GEL 1,332,000,000," Japaridze told The FINANCIAL, regarding the economic benefits of marijuana legalization. Taking into account that the budget revenue in Georgia is about GEL 8.6 billion, an additional GEL 1.3 billion income is quite worthy to revalue baseless beliefs about the threats of marijuana use.

The share of tourism in GDP is 7.2% in 2016 (6.2% in 2017, I-II quart.) and total output of production in tourism-related services is GEL 3.7 billion. Furthermore, tourists spending the highest amount of money in Georgia are from Azerbaijan, Armenia, Russia (decriminalized), Turkey (legal for medical use) and Iran (decriminalized). None of these countries have legalized possession, sale, transport and cultivation of marijuana; some of them have only decriminalized consumption of certain amounts of marijuana. Thus, if Georgians legalize marijuana and use the circumstances rationally, legalization might turn into essential benefits.

Summarizing marijuana legalization, supporters and opponents have stated the following: marijuana is referred to as a stepping-stone drug, leading to heroin, cocaine, or other harder drugs. This might seem reasonable but it is still unclear why people should be limited to do things that the Government considers is better for them, considering that the Soviet type of government collapsed long ago in Georgia. Legalization might make marijuana more affordable for teenagers. Well, that might be true, but none of the studies claim that marijuana is more harmful or addictive than tobacco and alcohol. Each year 5 million people die from tobacco-related illness and 2.5 million from alcohol abuse (WHO). Then let's prohibit it and save people's lives. Marijuana abuse is tied to brain damage, lung and brain damage, motivational syndrome etc. However, other studies claim that marijuana treats symptoms of HIV/AIDS; Parkinson's; Alzheimer's; substance abuse disorders; reverses the carcinogenic effects of tobacco; spurs creativity in the brain, etc. NIDA showed that drug fatalities are on the rise in the U.S. Most notably, deaths caused by heroin and benzodiazepines, and mention only a single record of a fatal cannabis overdose.

Thus, the arguments are controversial. However, all the negative effects of legalization might be balanced out by the two core democratic values: 1) everyone has freedom to believe what he wants and freedom to choose his way of life; 2) each citizen can find happiness in his own way as long as he does not tread on the rights of others. And here comes the issue, whether marijuana decriminalization or legalization treads on the rights of others. Decriminalization is more likely not to limit non-smokers' lives. As for legalization, opponents should take into consideration that not only marijuana, but excessive use of any substance is harmful, including alcohol, tobacco, caffeine, even pizza. Would you want the Government limiting how much coffee or fries you have?! Definitely not. Thus, in 2017, not even Georgians, with their traditional beliefs, should discuss whether people have a right to choose their own way to live; which for sure, they do. 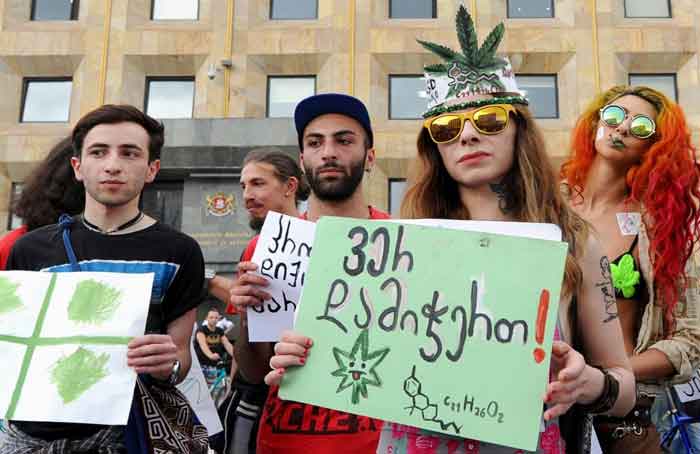