Illinois - Now that the city council has cleared the way for a medical marijuana dispensary to apply for one of two available Kane County slots, residents here say they hope Elgin gets one of those licenses. For James Halik, the hope is that medical marijuana can help with the migraine headaches he's suffered since he was 10 years old, and the lupus and fibromyalgia he was diagnosed with more recently. Hollyce Mack said that she's been using marijuana for several years to deal with the nausea caused by her epilepsy.

Both said they have used cannabis in the past to help with symptoms, with varying degrees of success. According to the Illinois Department of Public Health, approximately 6,300 Illinois residents have started the patient registration process for the Illinois Medical Cannabis Pilot Program since the department began accepting applications on Sept. 2. Of those, the state has received approximately 800 complete applications.

The state health department began issuing approval and/or denial letters two weeks ago. Registration cards will be mailed before dispensaries open, the state agency said. As of Oct. 2, there have been 159 cultivation center applications for 22 available locations. Kane County has had 14 applications thus far for the two dispensary licenses that will be allowed here. The Elgin-based application is from Salveo Health & Wellness, LLC – a business started by Chicago attorney and entrepreneur Alex Thiersch and Rockford native and businessman John Dohm – and Garden 6 Joint Venture LGP to locate in a unit at 1330 Crispin Drive. The city council voted 6-3 this week to approve the application.

It just makes sense, Halik said, that the state would place a dispensary in Elgin. He thinks Aurora and Elgin – being the two largest cities in the county and on either end of Kane – makes the most sense. Halik has tried marijuana to help with his lupus and fibromyalgia symptoms. The Elgin man and his partner have taken trips to Colorado – where marijuana is legal for recreational purposes, too – for just that reason. But those trips were not taken lightly and not without sitting down with his 16-year-old daughter to talk about the pitfalls of marijuana use and its legality, too, Halik said.

Even before medical marijuana became – or is in the process of becoming – legal in Illinois, he'd been told by several doctors that it could help his condition. Since he was diagnosed with lupus five years ago, Halik has been in a "flare up" of the autoimmune disease. He has also lost 70 pounds, was out of work for nearly a year, and is in constant pain. Marijuana has provided some relief, but limited by the trips to Colorado, he said.

"I know other folks with lupus where it has made a huge difference in their everyday lives," Halik said. Mack said she was diagnosed with epilepsy when she was 21. Now 50, she was told by doctors at age 36 that marijuana could help her. The marijuana doesn't help with the grand or petit mal seizures, Mack said. It does help with the nausea that made it impossible to keep down her medications.

"The nausea was the worst. I would take my medications but then have to throw up. I would throw up my pills," Mack said. Marijuana helped so that the medication stayed in her system. She has attended many of the city council meetings when the topic was addressed to help advocate for the dispensary application.

"I want one in Elgin because it is very progressive and good for business. And, I am a conservative," she added. Mack uses a vaporizer that allows her the benefits from the THC in marijuana without having the smoke. However, she hasn't used marijuana for several months after a change in her epilepsy medication. 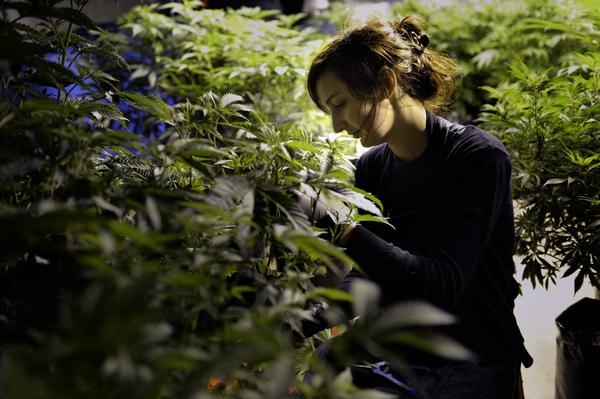